Earth Science, which consists of Geology, meteorology, and oceanography, refers to the category of science that studies the planet. Learn the branches of earth science, their linguistic roots, and the ways scientists explore them. Updated: 09/20/2021
Create an account

What Is Earth Science?

There are three main branches of science: life science, physical science, and earth science. In each of these disciplines are subcategories of specific areas or fields. Life science includes biology, ecology, or environmental science. Physical science includes chemistry and physics. Earth science, which is the topic of this course, includes many branches, some of which we will cover in this lesson. We will discover what geology is along with the related branches of meteorology and oceanography. 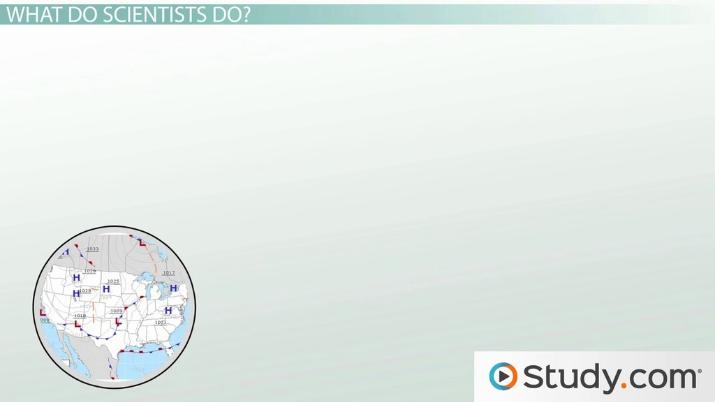 Earth Science Is More Than You Think

Our language is made up of many parts of words from many different languages. Science is no different. Many of the words we use in science and medicine have their roots in Greek and Latin. If you are familiar with some roots and make connections with other words you know, the meaning of many words can be deciphered.

For instance, geology is the study of the earth. Broken down into its parts, '-ology' comes from the Greek word 'logia' and means 'the study of,' and the root 'geo-' means 'related to the earth.' These same parts are used many places in science with similar meanings, like geography, where 'geo-' means 'the earth' and '-graphy' comes from the Greek 'graphos,' meaning 'written.' Also, biology is the '-ology,' or 'study of,' 'bios,' or 'the way of life.'

How about some others? Meteorology can be broken apart to '-ology' from 'logia,' which we already learned, and 'meteor-,' which is Greek for 'high in the sky.' Meteorology is the study of weather. Oceanography, another branch of earth science, uses 'ocean,' or 'related to the ocean,' and 'graphos,' which we learned before means 'drawing,' giving us the name for the study of the oceans. Maybe the people naming this field thought 'oceanology' didn't have a nice ring to it.

What Do Scientists Do?

You might be asking yourself, 'What is the purpose of earth science,' or maybe, 'What do scientists study in these fields?' There are a great many reasons why earth science is an important field of study. Meteorology, for instance, is a very pertinent field of study because we are all affected by the weather. The more accurate the weather predictions, the better planning that can be made. The sooner warnings about impending storms, like tornadoes or hurricanes, are issued, the better chance for saving lives, property, and money.

Scientists study oceanography to learn about the composition, organisms, and processes of the ocean. This is important because 71% of our earth is covered by them, and they are critical for our survival. Food and other commodities come from the oceans. Oceans are being investigated for usable sources of energy and also because they are the main influence over our climate.

Geology has two main divisions to its field: physical geology and historical geology. Physical geology focuses on the composition and structure of our earth as well as its processes. Scientists might study earthquakes and their predictions or volcanoes and their eruptions. In historical geology, scientists would work on elucidating the past history of the earth and its organisms as well as the timing of physical events. They would work on reconstructing the formation of the earth and the sequence of events globally or locally. Geologists work to uncover sources of fuels and other natural resources and work to conserve our natural treasures.

Astronomy, as we learned, is the study of the universe. You may have asked yourself, 'What is the point of learning all that stuff about outer space?' Some reasons are very practical. For example, understanding the cycle of the sun and how it changes can help us make sense of our seasons and global changes. Astronomers also can use our knowledge of the earth and life to understand other planets and narrow down where to search for life.

Each of these fields can be broken down into subspecialties for scientists to study, such as volcanology or seismology, in which they would be studying volcanoes or earthquakes, respectively. Physical geology refers to the study of the composition and structure of the earth and its processes, where historical geology does more work with history and timing of events and life in the past.

As you study earth science, you will begin to recognize word roots and their meanings, which will help you understand new words that you encounter, like 'geo' referring to the earth and 'logia' becoming 'ology,' which refers to study or wisdom. You can share with your friends that you are learning new languages, Greek and Latin, and impress them with your expanded vocabulary.

Upon completion of this lesson, it's possible that you could be able to:

What is Dolomite? | Formula, Structure, & Uses

Rock vs. Mineral Differences & Relationship | What is the Difference Between Rocks & Minerals

What is Dolomite? | Formula, Structure, & Uses

Rock vs. Mineral Differences & Relationship | What is the Difference Between Rocks & Minerals