Scott has a Ph.D. in electrical engineering and has taught a variety of college-level engineering, math and science courses.

Electromagnetic (EM) radiation is the behavior of electric and magnetic waves through a medium. Explore an introduction to EM radiation and learn about the definition of electromagnetic radiation, the wavelength, spectrum, and energy of EM radiation. Updated: 10/13/2021
Create an account

It was a Saturday and I was working on my second cup of coffee in the morning. I popped the coffee cup into the microwave for about 30 seconds just to heat it up. Next, I grabbed the remote and switched on the TV to check out the morning cable news - there wasn't much going on. I often go to the grocery store on Saturday mornings, so I got dressed, hopped in the car and started driving. My favorite FM station had a boring talk show, so I switched to a satellite music station. Then the portable GPS started beeping at me; I guess I left it on from a previous road trip.

The sun was shining, but I saw thunderclouds in the distance and even a flash of lightning. I slowed down a bit when I saw a cop parked by the road aiming his speed gun. Further down the road, my thoughts started wandering back to a week earlier when I had been at the doctor. My heart was making an unusual ticking sound, so he wanted me to go to radiology to get some 'pictures' taken. As it turned out, everything was fine. I was jolted back to reality with the ringing of my cell phone. It was my wife, so I pulled over to the side of the road and had a brief conversation. Ah … pick up some extra AA batteries at the store for her wireless mouse. And so the day goes …

This could have been a typical Saturday for many of you. We live in a world where we benefit from both natural phenomena and man-made technologies that all have one thing in common - electromagnetic (EM) radiation. In my Saturday morning story, there were at least a dozen examples of EM radiation. Let's define EM and then analyze my story. 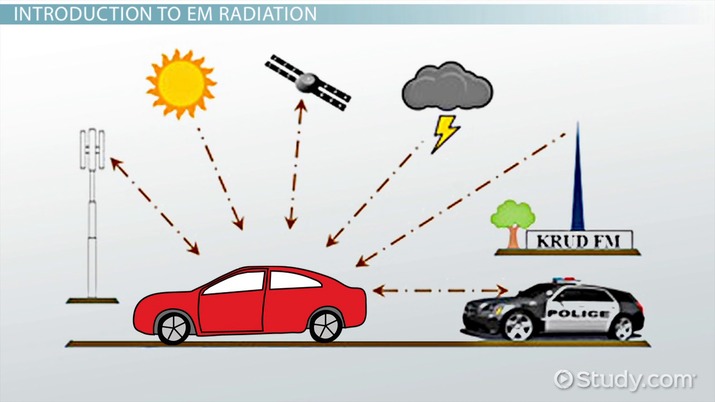 Try it now
Back
Coming up next: What is Solenoid? - Definition, Uses & Examples

Electromagnetic (EM) radiation is the movement of energy - through space or a medium - composed of both electric and magnetic waves. These waves oscillate at frequencies that can vary from a few cycles per second (hertz) to more than 10^20 hertz. The electric and magnetic waves have oscillations that are oriented 90 degrees from each other and 90 degrees from the direction of travel of the wave. Here is a picture commonly used to visualize EM radiation:

The wavelength is defined as the physical difference - measured in meters - between two successive positive (or negative) wave peaks. The wave travels through free space at the speed of light, so wavelength is related to frequency by the following equation:

As an example, suppose you are driving a truck down the highway and chatting on a CB radio, channel 19, at a frequency of 27.185 MHz. About what wavelength are your signals?

Here's another example. Suppose a satellite communications link for the control of commercial drones is designed for a wavelength of 37.5 mm. What is the operating frequency?

Let's return to my adventures on Saturday morning. If you have a good memory, you should probably remember that I referenced several examples of EM radiation. Here is a table of the things that I described in increasing order of their typical frequencies (decreasing order of wavelength):

By the way, if you would like to 'tune in' to the radio wave that lightning creates, set an AM radio to a place on the dial that is between commercial radio stations and turn up the volume. Now look for the lightning. At exactly the same moment you see the lightning, you will hear a 'scream' of static on the radio. What you're hearing is a multiple, or harmonic, of the lightning's EM signal. This should not be confused with thunder, which is a sound wave, much slower, and is considered to be a mechanical wave. The lightning EM radiation traveled to your radio at the speed of light!

In my Saturday adventure, I described both natural and man-made EM radiation that spanned the full range of frequencies, from as low as 3 Hz (the lightning) to as high as 30 billion-billion Hz (x-rays). This continuous range of frequencies (or wavelengths) is called the electromagnetic spectrum. The following diagram gives you a snapshot of this spectrum, including its wavelengths and frequencies.

The combination of electrical and magnetic waves that operate in harmony in an EM wave contain energy. In the early days of AM radio, listeners used to buy or build 'crystal sets.' Here's a picture of a typical early set minus the headphones (which were connected to the visible posts in front) and the antenna (usually a very long wire strung outside):

A crystal radio was a simple affair, consisting of an antenna, a coil, a capacitor, headphones, and a crystal of galena, germanium or other semi-conductor material.

The beauty of crystal sets was that they operated without any power of their own! All the power needed to create an audio signal in the headphones (so you could hear the radio station) was derived solely from the energy of the incoming EM signal. Once the broadcast AM signal hit the antenna, the EM energy was converted to pure electrical energy, and the electrical energy was then tuned and converted to sound.

To think about EM wave energy, imagine tying a rope to a tree or other object. Now start moving the end of the rope up and down until you create a wave. The faster you go, the faster the wave oscillates.

The faster oscillations take more energy from you to create than slower ones. That's exactly how it is with EM radiation. The energy of the wave depends only on frequency. The higher the frequency, the higher the energy. There is a very simple equation for this:

It may be a little puzzling to think that energy does not depend on the height (amplitude) of the wave. That's because with EM radiation, we are now working with photons rather than classical mechanical energy (sound waves) or alternating voltages and currents in a circuit. The energy calculated here is the energy of a single photon. Usually, the wave consists of an ensemble of photons, all oscillating with the same energy, and that's where we get the field strength.

As an example, suppose an EM wave is propagating through the atmosphere with a wavelength of 125 mm. What is the photon energy?

Electromagnetic (EM) radiation occurs both naturally (e.g., sunlight) and from man-made sources (e.g., wireless devices). It's defined as the movement of energy through space or a medium, comprising both an electric and magnetic wave that oscillate at right angles to each other and to the direction of wave travel. Each EM wave has both frequency and wavelength, the latter being defined as the distance between positive or negative wave peaks in either the electric or magnetic waves. Wavelength is easily calculated as the speed of light divided by the frequency, like in this equation provided here:

The electromagnetic spectrum is the continuum of frequencies (or wavelengths) from the low end of a few hertz (cycles per second) to over 10^20 hertz. Lightning, sunshine and gamma rays are examples of EM radiation that occur naturally. Radio signals, microwave ovens, cellular phones, x-rays and satellite communications are but a few examples of man-made EM radiation.

All EM waves contain energy, which is measured in terms of a single photon. The energy (in Joules) is calculated as Planck's constant multiplied by the frequency, or the product of Planck's constant and the speed of light divided by wavelength, like in this equation provided here:

Parts of an Atom: Overview & Structure | What is an Atom?