Tara received her MBA from Adams State University and is currently working on her DBA from California Southern University. She spent 11 years as a sales and marketing executive. She spent several years with Western Governor's University as a faculty member. Tara has been at Study.com for seven years.

Ethical managers are valuable to an organization and are appreciated by their staff members. Learn what ethical leadership is and who some well-known ethical leaders are in this lesson.
Create an account

Your boss is a great guy. He shows respect to his employees by supporting their personal interests and needs. You have commented many times that he is the most honest, considerate, and fair boss you have ever worked for. You trust him and know that he will protect the rights of each person in your department. This boss is a great example of an ethical leader.

Ethical leadership is exhibiting morals and values in a management position. An ethical leader demonstrates character, morals, and virtue in their work, focusing on the needs and rights of their employees. 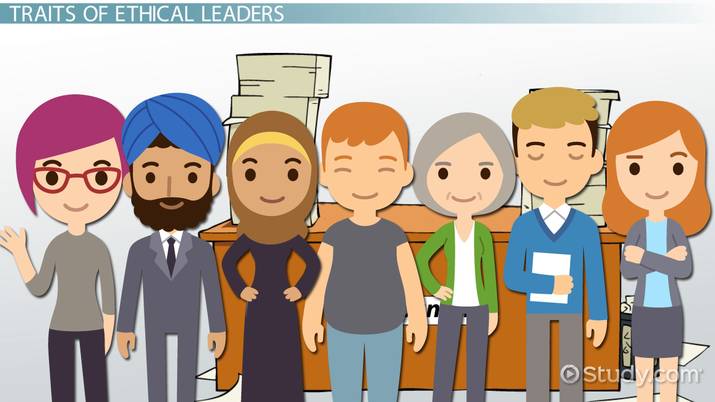 Coming up next: Ethical Considerations of Leaders & Managers

There are some basic responsibilities and obligations for ethic leaders, including setting a good example, holding everyone to the same standard, and making expectations clear.

An ethical leader demonstrates appropriate and professional behavior for his or her team. For instance, a leader who lies, avoids responsibility, or does as little as possible in his or her own job is not demonstrating ethical behavior. The team will not respect him or her. Unless their personal code of conduct causes them to be ethical, employees will exhibit the same unethical behaviors as the manager.

Ethics can also be exhibited when working with clients and vendors. An ethical manager is honest and straightforward with everyone he or she deals with, not just employees.

Holding Everyone to the Same Standard

Now, imagine you're an accounting clerk at a large office building. There are six other people in your department. Your boss has made it clear she wants everyone to be at work by 8:30 in the morning. However, two of the employees are friends with the boss and get special treatment because of their relationship. They come in at 9:00 or 9:15. Neither of these employees are reprimanded for their lateness.

Another co-worker was 20 minutes late yesterday, arriving at 8:50 in the morning. The boss brought it to his attention that he was late and said he would be written up if he's late again.

Lastly, let's look at setting expectations. An ethical manager ensures his or her expectations are understood and clear. As in the previous example, your boss explained that everyone should be at work by 8:30 in the morning. Everyone should have the same information and understand what the boss expects. If some employees are told 8:30, and others are told 9:00, and others are told the start time is flexible, the manager will be seen as unfair, inconsistent, and unethical. However, if all employees are told to be at work at 8:30 and held to the same standard, the employees will likely honor the request more consistently and feel the manager is being ethical and fair to all employees.

Ethical leaders share the same basic traits: honesty, fairness, respect for others, and self-regulation. These leaders keep their word and are honest with their employees, even when it's difficult. They treat everyone fairly and are respectful to their team members. They also perform at a high level personally. These behaviors demonstrate their ethics and encourage others to be ethical as well.

Imagine your accounting boss meets with your team on a weekly basis. Information is clearly communicated on a regular basis, ensuring everyone has the same data. Whenever challenging situations come up, your leader seeks solutions that are fair and respectful to all parties involved. Because your leader has exhibited ethics in the past, employees and colleagues trust him or her and seek his or her opinions, as they believe the leader is reasonable and fair in sharing his or her thoughts. These behaviors exhibit ethics.

There are many excellent examples of ethical leaders, including:

Let's recap. Ethical leadership is the practice of being honest and virtuous in a role as a manager. There are several responsibilities and obligations of an ethical manager, including setting a good example, holding everyone to the same standard, and making expectations clear. There are several excellent examples of ethical leaders, including Mahatma Gandhi, Anita Roddick, and Warren Buffett.

How to Select a Career-Focused Degree

Resume Sections & Components | What are the Parts of a Resume?

How to Create a Great Resume and Cover Letter

The Importance of Ethical Leadership Skills

What Is a Mentee? - Responsibilities & Benefits

How to Demonstrate Professionalism in the Workplace

What Is a Mentor in Business? - Definition & Concept

Spyware Types & Examples | What is Spyware?