Eutrophication occurs when an aquatic system has too many nutrients in it, which can be just as harmful as having too few. This lesson delves into the causes, effects, and prevention of eutrophication. Updated: 08/27/2021
Create an account

All living things need specific nutrients to survive. Usually, nature does a pretty good job of providing just the right amount of nutrients, because too many or too few can cause problems. This is especially true in aquatic ecosystems because they are so dynamic. When too few nutrients are present, the water is oligotrophic. It makes sense that when there is not enough nutrition available for the variety of organisms living in an aquatic environment, serious problems will arise.

However, problems can also arise when the aquatic system has an overabundance of nutrients. When this happens we get eutrophication. A eutrophic stream, river or lake occurs when too many nutrients, like nitrogen and phosphorous, are present, usually as a result of runoff from the surrounding land. Algae, plankton and other microorganisms love these types of nutrients, and when they are plentiful, these aquatic organisms can take over. When a lake, river or other aquatic system becomes eutrophic, it can have serious negative effects on other organisms like fish, birds and even people. But first, let's look at what causes eutrophication. 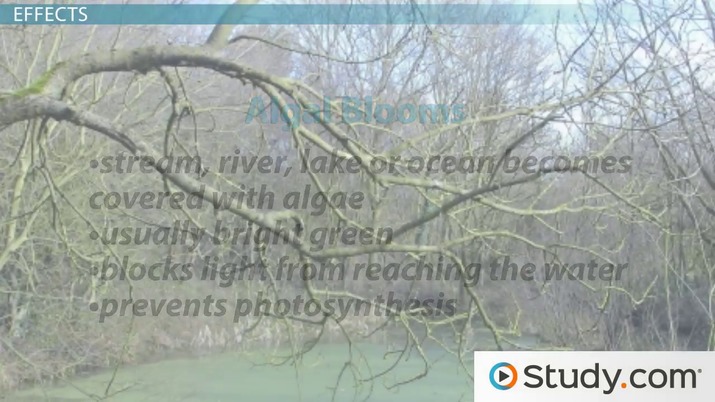 Eutrophication is most often the result of human activity. Farms, golf courses, lawns and other fields tend to be heavily fertilized by people. These fertilizers are the perfect type of nutrients to feed hungry algae and plankton, and when it rains, these fertilizers run off into lakes, streams, rivers and oceans. Concentrated animal feeding operations (CAFOs) are also a major source of polluting nutrients.

Eutrophication can also come from natural events. If a stream, river or lake floods, it may wash away any excess nutrients off the land and into the water. However, eutrophication is less likely to occur in areas that are not surrounded by fertilized lands.

Eutrophication can have serious, long-term effects. The most notable effect of eutrophication is algal blooms. When a bloom occurs, the stream, river, lake or ocean becomes covered with algae, which is usually bright green. In addition to looking pretty ugly, it also blocks light from reaching the water. This prevents the aquatic plants from photosynthesizing, a process which provides oxygen in the water to animals that need it, like fish and crabs.

When the oxygen in the water becomes too low, the water becomes hypoxic. If the hypoxia is bad enough, no organisms can survive there, and a dead zone is created. Dead zones are very dangerous because they not only have negative ecological impacts, but also cause economic issues. When aquatic animals die in large numbers, both commercial and recreational fishing industries are negatively impacted.

Eating contaminated seafood from eutrophic waters can cause people and other animals to get sick. Additionally, people who swim in eutrophic waters may develop skin, eye and respiratory issues. Eutrophication can also greatly affect the aesthetics of a water system. The water may become more turbid, become dark and murky colored, have a bad smell and is usually covered with a slime or foam.

While eutrophication can have negative effects on aquatic systems, there are helpful measures that can be taken. Conserving critical water systems (like wetlands), using low-phosphate detergents and fertilizers and designing better sewage treatment are all ways to prevent eutrophication.

Eutrophication occurs when an aquatic system has an overabundance of nutrients. It is most often caused by human activity like farming, maintaining golf courses and other activities that can lead to fertilizer run off. Natural events, like flooding, can also lead to eutrophication, but usually only if there's human activity nearby.

Eutrophication can have serious effects, like algal blooms that block light from getting into the water and harm the plants and animals that need it. If there's enough overgrowth of algae, it can prevent oxygen from getting into the water, making it hypoxic and creating a dead zone where no organisms can survive. Not only does this damage the environment, it can also have serious economic impacts on commercial and recreational fishing. Other effects of eutrophication on humans can include sickness from swimming in eutrophic waters or consuming contaminated seafood.

The Efficacy & Consequences of Cloud Seeding

What is Biomagnification? - Definition & Examples

What is Limnology? - Definition, Scope & History

The Single-Cell Model of General Circulation

What is a Wetland? | Types & Characteristics

What is the Difference Between Bioaccumulation & Biomagnification?