Andrew Sedillo has taught Language Arts, Social Studies, and Technology at a middle school level. He currently holds a Bachelor's of Arts in Education, Master's of Arts Educational Learning Technology, and a Graduate certificate in Online Teaching and Learning.

View bio
In contrast to creative writing, expository writing is used to 'expose' or explain information in detail. Learn more about expository writing through its examples and by examining its different purposes. Updated: 10/20/2021
Create an account

When writing an expository essay, it's important to write with the assumption that your audience has little to no background knowledge about the main topic. Your duty as the writer is to provide the reader with as much information as you can. The reader should feel as if he or she has learned something after reading your essay. 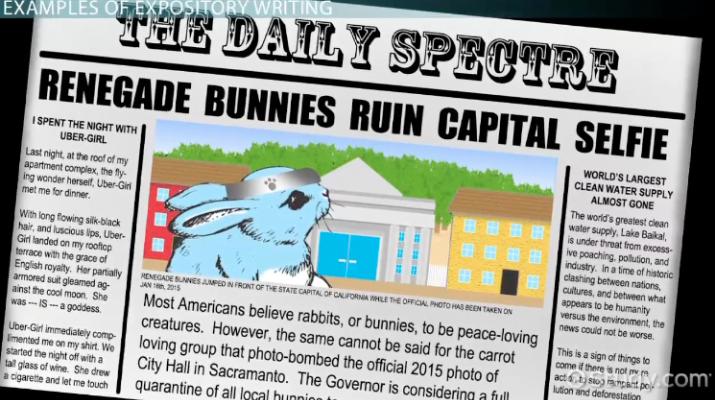 Coming up next: Components of Writing a Persuasive Essay

There are different types of expository writing that are used for different purposes. Let's take a look at some examples. First, a descriptive essay can be used when the writer wants to describe the characteristics or features of a person, place, thing, process, event, etc. Descriptive essays, more than other types of expository writing, seek to stimulate the reader's senses.

For example, if you wanted to describe what chocolate chip cookies are like, you might write: 'Chocolate chip cookies are one of the most popular desserts in the world. They can either be crispy or soft and have a sweet smell to them reminiscent of a bakery. They taste rich and melt in your mouth. When they bake, they 'wrinkle' up in the oven, and the combination of the nooks and crannies in the dough with the mouth-watering chocolate chips on top make them hard to resist.' These several sentences have aptly described chocolate chip cookies using sight, smell, taste and touch. You could also describe a process, such as running a marathon, in which you told the reader about how much you sweated, how you lost your breath going up hills, how you couldn't see three feet in front of you because of the fog, etc.

Next, process writing is often used in instruction manuals and other technical writing pieces. A process essay should be well-structured, so that someone reading it can follow sequential directions. An example of such a piece of writing would be practically any instruction manual you might happen to have, from how to operate your toaster oven to how to change a tire on a bicycle. Software manuals are full of this type of writing. Many examples of process writing have step-by-step instructions, such as 'Step 1: Put collar on dog. Step 2: Attach leash to collar. Step 3: Open door and step outside with dog.'

Now let's take a look at comparison essays, which show how two or more things are similar or different. For example, an article about football positions might say: 'Wide receivers and tight ends are almost the same thing on the football field. They are both positions on offense that are designed to score points. What makes these positions different, however, is the formation in which they line up on the football field. In addition to formation differences, the tight end is used more for blocking than a wide receiver.'

Next, a cause/effect essay will recount an event or events and explain why one or more things occurred. For example: 'Johnny was rated highly by college scouts in the nation and had a good chance of getting into several top schools. He was averaging almost 200 yards rushing in high school football games. Johnny was nervous that another athlete would begin to catch up to him in stats, so he decided to take sports-enhancing drugs. Unfortunately for Johnny, he was eventually drug tested. This led to him not only being kicked off the football team but to being denied several scholarships from Ivy League universities. He eventually ended up taking night courses at a community college while working full time at a car wash. It took him four years to finish his associate's degree.' This paragraph explains nicely the cause and effect pattern of how Johnny's life went downhill.

Finally, a problem/solution essay states a problem and then proposes one or more solutions. Newspaper editorials are good examples of problem/solution writing. For example: 'Our public schools waste over 70% of the paper, plastic and glass that they use. There are ways we can get teachers and students to reduce the waste. One solution would be to put a recycling bin in each classroom. This would at least begin to make people more aware of the problem. Another idea would be to have a contest to see which classroom can produce the most recycling or the least amount of trash. The winner could be treated to a pizza party.'

Expository writing is writing that seeks to explain, illuminate or 'expose' (which is where the word 'expository' comes from). This type of writing is different from creative writing. Expository essays are used throughout academia, but this type of writing is also used in magazines, newspapers, technical writing and other areas. Five of the most common types of expository writing are descriptive essays, process essays, comparison essays, cause/effect essays and problem/solution essays.

By diligently studying this lesson on expository writing, you'll prepare to do the following afterwards:

Now you know the basics of what expository writing is and how it's used. Take this opportunity to explore the following prompts and learn more.

Think about a topic that you would like to explain to other people. It could be a recipe, the plot of a movie, how to change a bike tire, or any number of other topics. Write an expository essay about the topic of your choice. Make sure to clearly state your thesis and decide in advance which of the major types of expository essays you're going to write: descriptive essays, process essays, comparison essays, cause/effect essays and problem/solution essays are all great places to start!

How to Explain a Process in an Essay: Lesson for Kids

How to Write & Present an Expository Speech

Components of Writing a Persuasive Essay