Learn about extinction, which occurs when an organism ceases to exist anywhere on Earth. Learn the definition and background of extinction, explore mass extinction, and discover humanity's role in extinction rates. Updated: 09/20/2021
Create an account

To say that an organism is extinct means that it no longer exists anywhere on the planet. When we hear the word 'extinct,' the first thing that springs to mind are animals that existed millions of years ago that we have never seen, such as the dinosaurs, saber-toothed tigers, the wooly mammoth and the giant shark, Megalodon. However, numerous species are in danger of going extinct today, and many already have.

There are actually two different types of extinction. Background extinction refers to the normal extinction rate. These are species that go extinct simply because not all life can be sustained on Earth and some species simply cannot survive. Mass extinction is a widespread event that wipes out the majority (over 50%) of living plants and animals. The asteroid that hit Earth and, according to many scientists, killed off the dinosaurs is a great example of a mass extinction event. 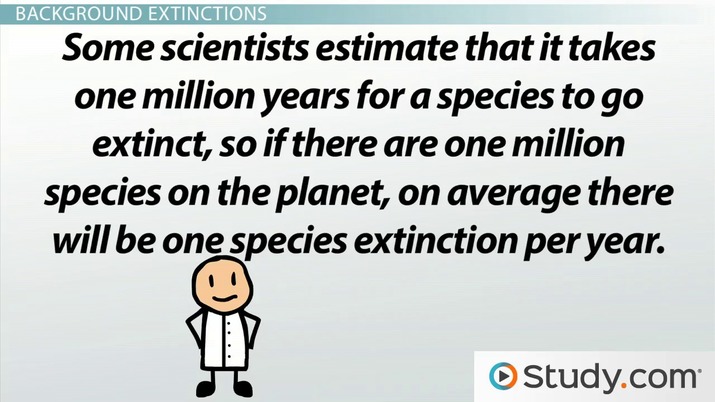 Try it now
Back
Coming up next: Differences Between Endangered Species and Threatened Species

A crazy statistic to think about is that as many as 98% of the documented species on our planet are extinct. That means that all the plants and animals that you know about only comprise 2% of the animal and plant life that once inhabited the Earth. The majority of animals and plants we know about from previous times are because of fossils.

When plants and animals became trapped in lava or buried under a rock, their remains sometimes are preserved within the medium (or substance) they were once trapped in. Over time, these remains get buried under the ground, further preserving them for us to find at a much later date. The term 'fossil' actually means 'obtained by digging.' We can learn a lot about the animals and plants that inhabited the Earth through fossils.

Scientists estimate that over the past 540 million years, there have been five different mass extinction events where over 75% of the plant and animal life died off. The most recent of these was about 65 million years ago at the Cretaceous-Paleogene boundary, which is when the dinosaurs went extinct.

Extinctions are a normal part of evolution. Background extinctions are simply a measure of how often they naturally occur. Background extinction rates can be measured in three different ways, and each measurement provides a different natural extinction rate estimate. The first way is to examine the number of species that go extinct over a given period of time. Geologists like to call these periods of time 'eras.'

Scientists can make these estimates using the fossil record. For example, scientists have examined the fossils from the Devonian era and determined that over an era of about 20 million years, about 70% of the invertebrate species (animals without a backbone) went extinct!

The second way is to approximate the extinction rate over a million years. Some scientists estimate that it takes one million years for a species to go extinct, so if there are one million species on the planet, on average, there will be one species extinction per year. The third way is to look at species survival rates over time.

Given how many species exist in the world today, scientists can estimate how long a species can exist on the planet and how many different species will go extinct by examining past extinction events. Currently, the typical survival rate for any given species is 5 to 10 million years before going extinct.

While there are natural extinction events, the rate of extinction has drastically increased over the past millennium due to the presence of humans. We clear land for buildings, roads and agricultural use, overfish the oceans and dump thousands of pounds of garbage into landfills. These are all practices that alter and destroy lands that plants and animals need to survive. When we destroy a habitat for land to build upon, where do the plants and animals that used to survive in that habitat go? Many cannot survive outside their native habitat, so they end up going extinct.

According to Endangered Species International, a foundation that uses the International Union for Conservation of Nature, or IUCN's, list of endangered species (a species in danger of going extinct), of almost 45,000 species examined by 2011, 905 of those are extinct. Almost 500 of those species are from North America alone! Additionally, this number jumped from the last count in 2006, which listed 784 extinct species.

Therefore, if we make a rough, high-end estimate and say there are about 10 million species on the planet, then using our background extinction math, there should be about 10 species that go extinct a year. However, according to the IUCN, 121 species have gone extinct in seven years, which is almost double the predicted extinction rate!

To say that an organism is extinct means that it is no longer living anywhere on the planet. There are two types of extinction: background extinction, which is a natural part of evolution, and mass extinction, which typically means some form of catastrophic event (such as a volcano eruption or an asteroid hitting the Earth) has decimated plant and animal life. The last mass extinction event was about 65 million years ago, and it was the event that wiped out the dinosaurs.

Scientists have discovered species that are now extinct by finding their fossils, or preserved remains, buried in the ground. Although background extinctions are a natural process, humans have contributed to species extinctions by destroying habitats and overfishing. According to the International Union for Conservation of Nature, there are 905 species that are extinct, and a large number of those extinctions can be directly attributed to the actions of humans.

The contents of this lesson should prepare you to:

Try it now
Back
Create an account
What Is Extinction? - Defining Background and Mass Extinction
Start today. Try it now
Environmental Science 101: Environment and Humanity

Hominid Types & Characteristics | What is a Hominid?

Epigenesis Concept & Examples | What is Epigenesis?