Fiscal policy is a mechanism used by the U.S government to control the economy by raising taxes or choosing how to spend money on investments. Learn more about the meaning, usage and criticisms of U.S fiscal policy. Updated: 10/06/2021
Create an account

Imagine for a moment that the U.S. economy is like a roller coaster. It has that slow climb up that gets you nervous and wondering if you're going to make it to the top okay, yet you also feel excited because you get to see a breathtaking view once you reach the top of that first hill. The problem is once you reach the top of that hill, you realize that that pit in your stomach is back as you proceed to plummet down the other side of the hill.

While riding a roller coaster is fun in small doses, if the economy operated in a similar fashion for any extended period of time, it would wreak havoc on our society. I'm sure we can all agree that if the economy was a roller coaster, we would want the number of big drops to be as little as possible. Luckily, our government feels the same way, and to smooth out the ups and downs of our national economy, the government has several policy options.

One such option is known as the government's fiscal policy. Fiscal policy is the federal government's use of taxation and spending policies to affect overall business activity. 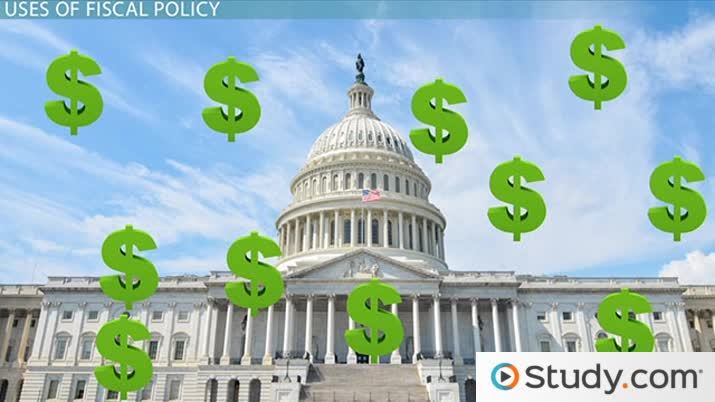 Coming up next: Monetary Policy & The Federal Reserve System

In regards to taxation and spending policies, the U.S. government can use fiscal policy in two ways:

Both of these fiscal policy approaches take the economic burden off citizens and, depending on the economic situation, the government may want to do one or the other or a mixture of both.

In times of expansionary fiscal spending, when the government wants to increase demand for goods and get the economy out of a recession, the government will likely increase spending and/or cut taxes. Spending more and lowering taxes makes it more likely that consumers will spend more money themselves because they have more disposable income. However, this type of use increases the budget deficit, or when the government spends more money than it takes in because tax revenue is lower.

In times of deflationary fiscal spending, when the government wants to decrease overall demand for goods to prevent a boom and bust scenario, the government will likely cut government spending and/or increase taxes. Having to shoulder more of the economic burden because the government isn't spending any of their revenue while also having to pay more in taxes, citizens will reduce their spending because they don't have as much money. This type of policy, however, does help the government because it allows itself to keep more of its own money, and it also generates more revenue through higher taxes.

So now that we know that sustained economic roller coasters are bad and that the government utilizes fiscal policy to help prevent that, it's important to ask 'Is it actually effective?' The short answer is 'yes,' and mostly in times of deep recession, but there are some important criticisms to mention. The government may have poor information about the state of the economy and struggle to have the best information about what the economy needs.

Finding this information takes time, and so by the time the government does identify the problem, it then needs to take time to formulate a solution - not to mention the time it would take Congress to approve of the plan once one was figured out. So because of all these time lags, any implemented plan may be too late because by then the economy may have changed.

Secondly, many also argue that government spending is inefficient. In theory, it sounds nice for the government to spend more and take the burden off its citizens to pay for things, but oftentimes many feel that the spending will be wasted on inefficient spending projects. This is because interest groups put political pressure on their particular spending projects that may or may not have the best interest of the economy as a whole in mind.

Lastly, when using expansionary fiscal policy, an increased budget deficit forces the government to borrow more money so that it can pay its own bills, and this in turn leads to increasing the cost of debt repayments.

View this lesson in order to:

Perfect Competition Characteristics & Examples | What is a Perfectly Competitive Market?

Gross Domestic Product Factors & Activities | What is Included in GDP?

What Is Business Environment? - Definition & Factors