View bio
Folklore is the oral history, traditional beliefs, customs, and stories of a community. Learn the definition of folklore and discover popular legends and myths. Updated: 09/14/2021
Create an account

Folklore allows people to give meaning to their lives and their surroundings. Because every culture has different historical backgrounds and traditions, folklore has a different definition to each culture. The definition presented in this lesson is a general one that covers the topic broadly.

A famous folklore in American history is the tall tale about the fictional lumberjack Paul Bunyan. In the story, Paul has superhuman skills that allow him to complete tasks that other lumberjacks are unable to complete on their own, such as taming the blue ox named Babe. 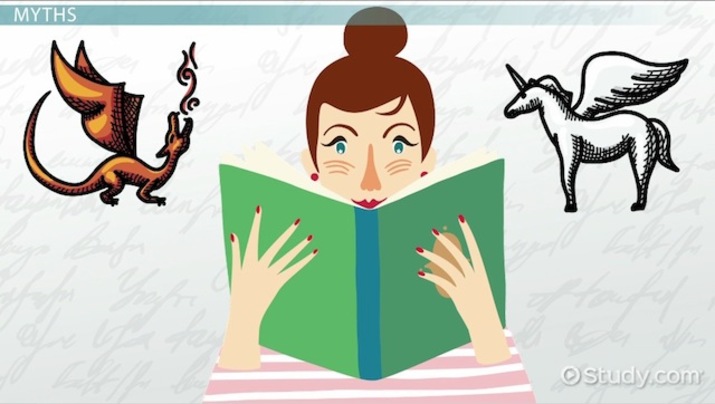 Coming up next: What is Modern Fantasy Literature? - Definition, Authors & Novels

The term myth is derived from the Greek word mythos, which means story. Myths are commonly used to describe the origins of a group of people, the beginning of the universe, natural events or the rituals and traditions of a specific culture. For example, a myth can be used to explain the origin of a holiday or cultural tradition.

Mythical stories are usually characterized by nonhuman characters and magical events that cannot be proven to be true or false. They answer questions that have unknown answers in the real world. Myths usually contain creatures and places that are not real. However, they usually provide an answer to a valuable philosophical questions, such as 'what happens after death?'

Legends are stories regarding the recent past that are passed down from generation to generation and are not verifiable. Like myths, they contain events that are seemingly impossible. Although the people in a culture believe the story to be true, legends contain qualities that make it seem more unreal than real.

A legend that many Americans are familiar with is the legend of Bigfoot. Bigfoot is a large ape-like creature that is lives in the forest. No one has a clear identification of what Bigfoot looks like because there is no real proof that he has actually been seen. This lack of factual information does not stop believers from passing along this legend from generation to generation.

Folklore is oral history that is preserved by the people of the culture, consisting of traditions belonging to a specific culture. The real purpose of folkloric tales, though, is to provide historical information regarding the origins of a group of people. Paul Bunyan is an American example of folklore, while myths , which are commonly used to describe the origins of a group of people, the beginning of the universe, natural events or the rituals and traditions of a specific culture, are characterized by their nonhuman characters and impossible events.

Legends, which are stories regarding the recent past that are passed down from generation to generation and are not verifiable, are characterized by their explanation of the recent past. Bigfoot is a good example of this. However, both myths and legends are types of folkloric tales that seek to educate the listeners on history as well as moral values.

For this activity, you will need to choose any legend or myth that interests you to write about and research. First, read the legend or myth. You will then need to include the following information in a multi-media presentation.

The two most important components of this assignment are the second and third bullet points. For the second bullet point, the focus is on the origin of your legend/myth. What country does it come from? How did the legend/myth originate? For the third bullet point, you can include any interesting information that you found about your piece of folklore. For example, you can include any pop culture references or any conspiracy theories that you find amusing. One common Scottish folklore is that of the Loch ness monster. There have been many supposed sightings of this sea legend, and some people spend their lives in search of this monster. This could be some information to include under the 'interesting stories or facts' section.

Once you are done creating your presentation, make sure to proofread, edit, and revise before publishing or turning-in.

Folktale Characteristics & Types | What is a Folktale?

Myth Overview, Types & Examples | What is a Myth?

Tall Tale Characters & Examples | What is a Tall Tale?

The Role of Literature in Learning to Read