My mom and I like to predict what is going to happen next when we watch a movie or TV show. We like to think our accuracy rate means we should be writing for our favorite television programs, but really, we're just good at reading the clues the writers have left about who committed the murder, or how the two protagonists will eventually meet up so they can fall in love.

In literature, foreshadowing is a literary device authors use to hint toward future events in the story. This can be helpful to the writer when she crafts her story to build suspense, to develop the plot and to add nuance. For example, if the murderer ends up being a character we were never introduced to, then the reader can feel unsatisfied or even confused.

Conversely, foreshadowing can also be used to throw us off the murderer's scent, so to speak, with deliberately placed clues called red herrings. For example, a red herring might make us think the husband did it, when it was really the wife the whole time. Foreshadowing can be as subtle as a seemingly-chance encounter, or as direct as the author giving away the ending in the beginning. Either way, readers can go back and look for how foreshadowing is used as part of the storytelling process. 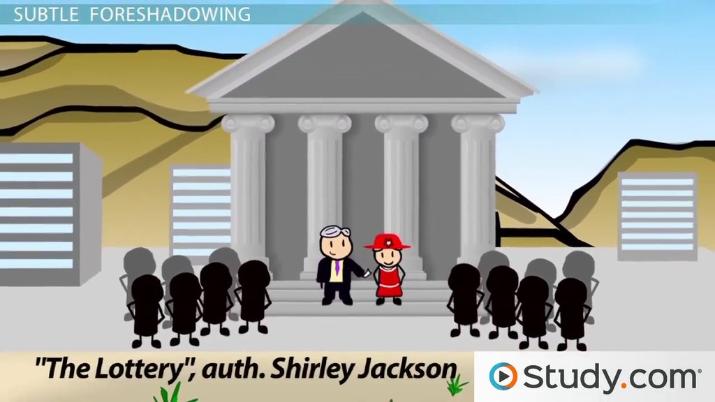 Coming up next: What is Catharsis? - Definition, Examples & History in Literature and Drama

In classic works, it was not uncommon for the story to begin with the author or playwright giving away the ending. Shakespeare must not have believed in trying to keep his audience from spoilers. Otherwise, he wouldn't have started his famous tragedy Romeo and Juliet with the following lines:

Two households, both alike in dignity,

In fair Verona, where we lay our scene,

From forth the fatal loins of these two foes

A pair of star-cross'd lovers take their life;

Shakespeare doesn't just hint that things will not work out well for Romeo and Juliet; he totally gives it away. It's okay, though, because you would be hard-pressed to find someone who doesn't already know the ending to Romeo and Juliet. While today we wouldn't necessarily want to be told how exactly a book or play ends at its outset, some authors use 'flash-forwards', where readers are given a scene that takes place way in the future, and then are sent back to an earlier date to see how it all unfolds. These flash-forwards can also contain red herrings though, where these scenes are not what they seem at first.

Another way authors have used this more direct style of foreshadowing is by using prophecies or omens, where another character formally predicts what will happen in the future. The Ancient Greeks were all about consulting oracles to find out their fates. In Sophocles' Oedipus plays, Jocasta seeks out a prophecy for her newborn son, Oedipus. The prophet predicts that her son will kill his own father, Laius, and in order to prevent that, they leave baby Oedipus on the side of a mountain.

But, as any good student of Greek tragedies knows, baby Oedipus finds his way off the mountain, grows up and ends up murdering his dad on the road, anyway. (And marrying his own mom, but that is a different lesson.)

In contemporary works, foreshadowing is more subtle and nuanced. In Shirley Jackson's short story 'The Lottery,' first published in 1948, foreshadowing is present in the smallest of details: the looks people give one another, how men hold small slips of paper. These details make sense when you first read the story, but take on added meaning when you read it a second or third time. It helps to know that it is not clear until the very end of the story that 'the lottery' the villagers have gathered for is not to give out money, but to decide who will be killed in the town's annual stoning ritual.

So when you first read how, Bobby Martin had already stuffed his pockets full of stones, and the other boys soon followed his example, selecting the smoothest and roundest stones, it seems like a harmless thing for boys to do, to collect stones. Read in light of the ending, we know the boys aren't innocently collecting stones, but gathering them to kill a neighbor.

The stones gathered in the boys' pockets are an example of what is sometimes referred to as Chekhov's Gun. Anton Chekhov was a Russian playwright who believed that each element added to a story should be meaningful. Chekhov wrote, Remove everything that has no relevance to the story. If you say in the first chapter that there is a rifle hanging on the wall, in the second or third chapter it absolutely must go off. If it's not going to be fired, it shouldn't be hanging there.

Even more subtle is the use of symbolic foreshadowing, when events, objects or even colors hint at what is in store for a character. Sometimes it can be a small detail that only English professors know is there. For example, a main character's name might have a deeply significant meaning in Greek or Latin that fits in with what eventually happens to her.

Or, as with the protagonist Isabel Archer in Henry James' 'The Portrait of a Lady,' an early description of a character's childhood home might hint at what is in her future. Isabel grew up in a swanky double house, two houses connected by an arched passageway in Albany, New York. Isabel's father dies at the beginning of the novel and she will soon have lots of choices to make, so the double house symbolically foreshadows her transition from one phase in her life to another. That Isabel chooses to stay in the most dreary of all the rooms in the house, the one that is kept bolted shut, takes on new significance when Isabel is later trapped in a loveless marriage.

Foreshadowing is used by authors to give hints, both direct and subtle, about what will eventually happen in a story to build their plots and add dimension to their stories. Authors of classical literature, like Shakespeare and the Ancient Greek playwrights, often told their audiences from the outset how their works would end or used prophecies and omens.

In more modern literature, authors use foreshadowing more subtly. Even more subtle is the use of symbolic foreshadowing, when events, objects or even colors hint at what is in store for a character. Sometimes it can be a small detail that only English professors know is there; for example, a main character's name might have a deeply significant meaning in Greek or Latin that fits in with what eventually happens to her.

Once a student has finished this lesson, he or she should be able to define foreshadowing and be able to recognize its use in literary works.

Supporting Your Message With Primary and Secondary Research

How to Fix a Sentence Fragment

Prose in English Literature Overview & Examples | What is Prose?

How to Recognize and Use Oxymorons

What is Internal Conflict in Literature?