Heather teaches high school English. She holds a master's degree in education and is a National Board Certified Teacher.

Did you know that Walt Whitman, who lived in the mid-1800s, was influential in shaping the American identity? Find out how his writing style is connected to the King James Bible and the famous Beat poet Allen Ginsberg.
Create an account

What Is Free Verse?

The Lord is my shepherd;
I shall not want.
He makes me to lie down in green pastures;
He leads me beside the still waters.
He restores my soul;
He leads me in the paths of righteousness
For His name's sake.

Psalm 23, much like the other Psalms and Song of Solomon in the Bible, is among the first known examples of free verse poetry, but what makes free verse poetry different from other poetic forms? Free verse is a category of poetry based on unrhymed lines and a lack of regular meter. So, while Psalm 23 might not have the sing-song rhyme and rhythm of other poems you've read, it's still poetry! 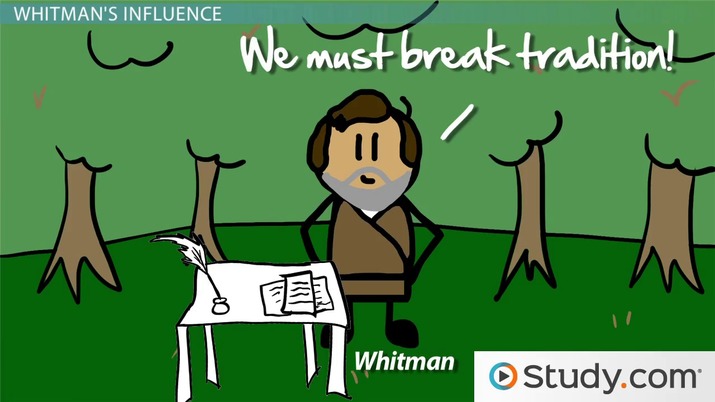 You might be wondering, 'If free verse doesn't have a rhyme or a meter, how is it different from prose, or ordinary written or spoken word?' To begin, free verse does follow conventional poetry in that it has intentional line breaks. The lines, which are often irregular and very short, at the very least give free verse poems the look of poetry.

As you can see in Psalm 23, the line breaks where the reader needs to pause, enhancing the overall reading of the verse. These poems also rely on devices that set them apart from everyday language, including parallelism, using similar grammatical constructions and repetition of sounds and images. So, while free verse may use some of the same conversational cadences found in prose, it is poetry because of its line breaks and its use of other poetic devices.

Before we look at a few examples of free verse, it's important to note that it can be easily confused with blank verse, a different category of poetry. Verse poetry is poetry that has both a consistent meter and a rhyme scheme. Blank verse is poetry based on unrhymed lines and a definite meter, usually of iambic pentameter. Both blank verse and free verse are free from rhyme scheme. But, whereas blank verse does have a consistent meter, usually iambic pentameter, that creates a du-DUM rhythm effect, free verse is free from both meter and rhyme. It is free from the limitations of verse poetry.

While we can trace free verse all the way back to the Psalms and The Song of Solomon in the King James Bible, it was Walt Whitman who brought attention and popularity to the form. Whitman's well-known collection of poems, Leaves of Grass, was published in 1855, just a few years before the American Civil War. He, like many others during the time, wanted to create writing that broke away from the traditional, conventional poetry of Europe in order to establish uniquely American poetry. Free verse became his means to do this.

In 'Song of Myself,' Whitman begins his poem with the following stanza:

I celebrate myself,
And what I assume you shall assume,
For every atom belonging to me as good belongs to you.

While there is no consistent meter or rhyme scheme, we do see that we have intentional line breaks in addition to other devices. We see the repetition of the word 'assume' to indicate the semblance between his ideas and the readers' ideas. He also repeats the root word 'belong' in the last line of the stanza to create a parallel structure to emphasize the balance between reader and speaker.

Whitman's attempt to create uniquely American poetry was successful, as it inspired poets since. T.S. Eliot, William Carlos Williams and Ezra Pound all belong to the canon of poets who use free verse. Allen Ginsberg, who notes Whitman as his inspiration, led the Beat Generation of the 1950s with his style of free verse. In his 1955 poem 'A Supermarket in California,' he even reaches out to Whitman:

What thoughts I have of you tonight, Walt Whitman, for I walked
down the side streets under the trees with a headache self-conscious looking
at the full moon.
In my hungry fatigue, and shopping for images, I went into the neon
fruit supermarket, dreaming of your enumerations!

Ginsberg's lines are longer and his language is far more conversational, but the image he creates adds to his use of the free verse form. Unlike Psalm 23 and Whitman's 'Song of Myself,' Ginsberg does not use the line breaks to guide the reader's pause for breath. The line breaks instead accentuate his symbols, 'the moon' and 'the neon fruit supermarket,' to contrast the nature he longs for and the urban city that surrounds him.

To review, free verse is a category of poetry based on unrhymed lines and a lack of regular meter. Unlike blank verse that uses the pattern of unstressed and stressed syllables, free verse does not have a defined meter. While we do find free verse from modern poets, such as Allen Ginsberg, we can attribute its popularity and importance to Walt Whitman, who used it to help shape the identity of a tradition of American writers.

After you have finished this lesson, you should be able to: