Janell has an MBA, a Master's in Education, and a BS in Public Safety Management.

Habeas Corpus is a petition that can be filed to the court by someone in custody regarding their detainment circumstances. Learn the history of the amendments that have been made since 1789 to this petition, and see examples of the detainee and inmate rights. Updated: 10/15/2021
Create an account

Habeas corpus is a petition that can be filed by a person in custody to the court regarding the circumstances of detainment. A detainee can file habeas corpus if he thinks his rights have been violated or there were factual errors surrounding the arrest and detainment, such as a wrong date of arrest, the wrong charges listed on the booking sheet, or the wrong birth date of the offender. Habeas corpus is also called the 'Great Writ.' The Latin meaning for habeas corpus is 'you shall have the body.' 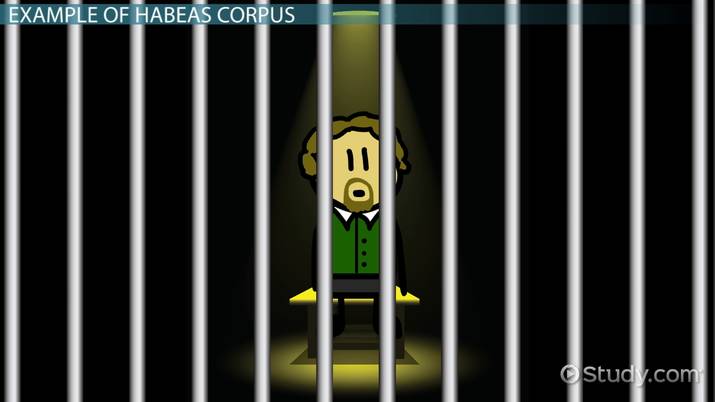 Coming up next: What Are Federal Rules of Evidence?

After hearing a disturbance at a neighbor's home, you call the police and report the disturbance. As you peer out your window, you see your neighbor, John, being escorted to a police car. The police officers take John to the department for questioning. John answers questions about the disturbance and admits he had hit his wife. The officers then arrest John for domestic violence. John is held until sentencing for 30 days.

While in jail, he realizes he is being improperly detained, because he was never read his Miranda rights, nor was he made aware that he did not have to answer the questions the officers had asked him. John files a petition for a habeas corpus against the officers who detained him. John asks the federal courts to review the practices of the officers and the process that they used to detain and arrest him.

Through the years, there have been changes made to habeas corpus. In 1915, it was expanded, and the terms were no longer restricted to violation of due process in the courts. Detainees and prisoners could file habeas corpus if they felt they were being detained under false pretenses, if there were mistakes with arrest paperwork, or the arresting officer arrested them because of evidence that was planted. Prior to 1963, state detainees were required to exhaust all of the resources available to them through the state, such as public defenders and the appeal system, before they filed habeas corpus with the federal courts. In 1963, this requirement was lifted, allowing them to file with the federal courts. Another change came with the Detainee Treatment Act of 2005 and the Military Commissions Act of 2006, which stated that detainees at Guantanamo Bay and members of the military are not entitled to habeas corpus but must go through the military proceedings.

Habeas corpus is associated with several amendments to the U.S. Constitution, including the Fourth, Fifth, Sixth, and Eighth. If a detainee or inmate feels that his constitutional rights in the preceding amendments have been violated, he can file habeas corpus.

The Fourth Amendment protects individuals against unreasonable searches and seizures, which includes an arrest. In the opening example, John felt he was being detained (seized) wrongfully, because he was not read his Miranda Rights. An inmate has the ability to file a habeas corpus if he or she feels the arrest, search, or seizure was conducted inappropriately. The right to due process is part of the Fifth Amendment. If there was a trial and the offender feels that the jury was biased, the judge had prejudices, or the lawyer did not give the best possible advice, then the inmate can file a habeas corpus on the grounds that she did not have due process. In the Sixth Amendment, the inmate has the right to a speedy and fair trial. The inmate can file a habeas corpus if he or she has factual information that he or she is not getting a speedy or fair trial. The Eighth Amendment does not allow excessive bail or cruel and unusual punishment. If a prisoner feels that either of these rules has been violated, he can file habeas corpus.

Each of the following is an example of a case that involved habeas corpus.

Brown v. Allen, 1953: This case set a precedent for state detainees and prisoners, allowing them to petition the federal courts to review their cases when they had been denied habeas corpus by the state courts. This was not allowed prior to Brown v. Allen.

Howes v. Fields, 2011: This was a case similar to the opening example. Randall Fields was found guilty in this case, but he felt he was detained improperly because he was not read his Miranda Rights. This case is an example of how a person detained or arrested can file habeas corpus on the grounds of unlawful detainment.

In New Jersey v. Rubin Carter, 1985, Rubin Carter was granted habeas corpus on the basis of not having been given a fair trial. His conviction of murder was implied because of his race, rather than based on factual evidence relating to the crimes.

When a person in custody feels he or she is being detained illegally or there were factual errors in the detainment, the inmate can file a petition of habeas corpus, also known as 'Great Writ.' This is a formal procedure that is in place for prisoners to request reviews. After the prisoner files the petition, the courts are able to review the file and decide if the prisoner is in fact being held illegally. Habeas corpus was initially part of the Judiciary Act of 1789 in the United States but was expanded in scope and became available to state prisoners in 1867. There are several important case examples that outline why or how inmates can file habeas corpus. There are several amendments to the U.S. Constitution, including the Fourth (no searches without warrants), Fifth (the right to due process), Sixth (a speedy and fair trial), and Eighth (no cruel and unusual punishment) amendments that, if violated, can be grounds for filing habeas corpus.