Sarah has taught Psychology at the college level and has a master's degree in Counseling Psychology.

Hallucinations can be caused by several things, including sleep deprivation and a variety of diseases. Learn the definition of a hallucination and the different types of hallucinations, including hypnagogic, hypnopompic, visual, auditory, olfactory, haptic, and gustatory. Updated: 09/09/2021
Create an account

At quick glance, what is the image in this picture?

When looking at this image, you're using your sense of sight to perceive what is there. So, is this an image of a vase, or is it two people facing each other? Which did you see first?

We become aware of and identify what is going on around us through our perceptions. Unfortunately, the five senses do not give us the whole picture. Tasting, hearing, smelling, feeling, and seeing are only the beginning of the sensory process. Although two people may be confronted with the same experience or stimulus, it's common for them to process the information differently. 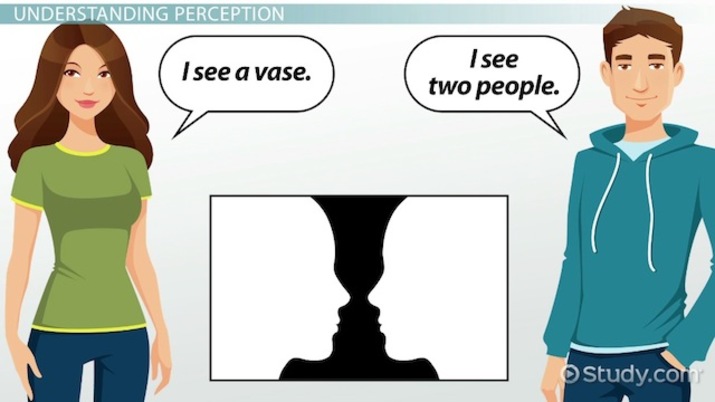 What Is a Hallucination?

Here's a list of some other causes of hallucinations:

We become aware of and identify what is going on around us through our perceptions. But our perceptions can sometimes deceive us, through either illusion or hallucination. An illusion is a misinterpretation of a stimulation to the senses, but a hallucination is different in that it occurs in the absence of a sensory stimulus.

As you finish this lesson on hallucinations, be certain of your ability to:

What is a Hallucination? - Definition, Causes & Types
Related Study Materials

What are Delusional Disorders?

What Is Lethargy? - Definition, Causes & Symptoms

What is Clinical Psychology?

What Is Eustress? - Definition & Examples

What Is Behavioral Therapy? - Definition & Techniques

Substance Use, Abuse, and Dependence: Definition and Causes of Substance Disorders

What Are Optical Illusions? - Definition & Types