Chris has taught music and has a master's degree in music education.

Harmony is a pillar of music defined as the simultaneous sounding of multiple notes or chords. Explore the basic theories and qualities of chords and learn about harmonic theory. Updated: 10/12/2021
Create an account

Definition of Harmony in Music

Harmony is when you have multiple pitches being played at the same time. If you think about a rock band, the guitar is typically providing the harmony. When we talk about harmony, we're generally talking about chords, which occur any time you have three or more notes played at the same time. Yes, that means your forearm striking the piano is a chord, and it is an example of harmony. But we're going to study how to make aesthetically pleasing harmonies. 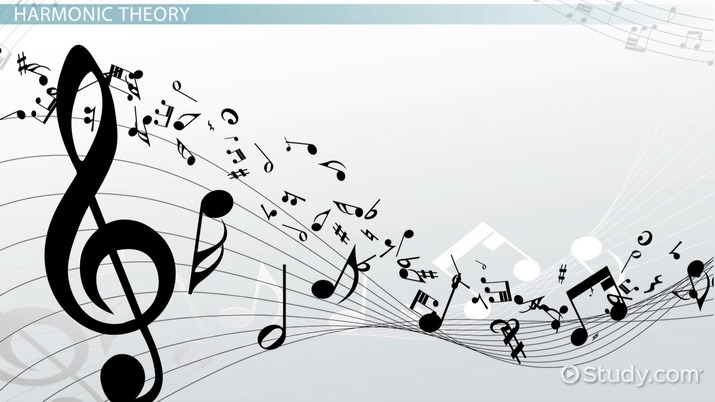 Coming up next: What Is Impressionism in Music? - Definition, Characteristics & Timeline

We need to look at individual chords and harmony as a whole. First, let's look at some basic theory about chords. Commonly, chords are made up of stacked intervals called thirds. This stacking of thirds is called triadic, or a tertian harmony.

Each note in a chord has a name. The bottom note is the root, the next note is called the third, and the next note up is the fifth. These numbers come from the interval between the root and the corresponding note. For example, a C major chord has a C as a root, an E as a third, and a G as a fifth.

Chords can be one of four qualities: major, minor, diminished, or augmented. The first two qualities (major and minor) are the most common and are concerned with the third of the chord. In a major chord, the third is a major third apart, while the minor chord has the third as a minor third apart. To tell the difference, you need to count half steps, which are the smallest distances between two notes (for example C to Db or A to Bb - the small b is notation for flat). A diminished chord has a minor third and a diminished fifth (the fifth is lowered a half step); the augmented chord has a major third and an augmented (raised) fifth.

When working with more advanced chords, such as 7th chords, you are simply stacking thirds up onto the existing chord. For example, a C7 means to have a major chord built on C and then a minor 7th above the root - in this case Bb. The minor 7th is implied, so you need to remember that if you see 7 next to a chord, it's a minor 7 unless notated otherwise.

There was a time when harmony was thought to be created through the interaction between multiple melodic lines. This type of harmony, called counterpoint, largely went out of style in the early 1700s, to be replaced by what we traditionally think of as harmony today - chords providing accompaniment for a melody. Eventually, harmony evolved again to include further and further developments away from tonality, or a fixed pitch center, to freely associated harmony, atonality.

The other relationship in tonal harmony is between consonance (musical rest) and dissonance (musical movement or tension). Chords can be classified as consonant or dissonant relative to the key they are in. The breakdown works like this (where each number represents a chord built on the corresponding note in the key):

Harmony motion requires the movement from consonance (rest) to dissonance (tension), then back to consonance. This can be seen at various degrees, depending on how you're analyzing a piece. From a full-piece perspective, one looks for the movement of the tonic to the dominant (or dominant replacement - think dissonant replacement as above) back to the dominant. On a smaller scale, individual phrases may see chord progressions like 1-4-5-1.

But what about major and minor chords? How do these affect harmony? Just as chords can be major or minor, so can the overall harmony. Depending on the quality of the 1 chord, the harmony can be considered major or minor. This does not affect the theory; it is more of what we might call a window dressing. Yes, some of the chord qualities differ, but the overall relationships remain the same.

In a major key, the chords of the scale are (with lower case roman numerals representing minor chords, and upper case representing major):

And for the minor key:

That funky chord, ii°, is a diminished 2 chord.

Harmony is the simultaneous sounding of multiple notes. When dealing with harmony, we are typically talking about chord, the simultaneous sounding of 3 or more notes. Chords are built out of stacked thirds, called triadic. The notes in a chord each have a name: The bottom is the root, the middle note the third, and the next note up is the fifth. These names come from the interval between the root and the note.

There are four qualities of chords: major, in which the third is a major third apart; minor in which the third as a minor third apart; diminished, a minor third and a diminished fifth (the fifth is lowered a half step); and augmented, a major third and a raised fifth. When building more advanced chords, the naming of the chord is related to the interval of the note added to the root of the chord. Harmony used to be created through the use of counterpoint, the interaction between multiple melodic lines, though this went out of style in the 1700s.

This music lesson should teach you to:

What Is Harmony in Music? - Definition & Theory
Related Study Materials

What is Melody? - Lesson for Kids

What is Timbre in Music? - Definition & Examples

Melody vs. Harmony: Definitions and Examples

What are Triads in Music? - Definition & Examples

Dynamics in Music: Types | What Does Forte Mean in Music?