Hemorrhage is a medical term used to describe the rupture of blood vessels, often due to injury, which results in excessive bleeding. Learn about the definition, symptoms, and classes of hemorrhage. Updated: 10/14/2021
Create an account

Bill is a bloody mess as he is brought into the emergency room. He was using a chainsaw that kicked back while cutting a fallen tree branch in his backyard, and now has a deep cut across his torso. The ER team has seen far worse and can save his life, but his injury is a good example of a hemorrhage. In simplest terms, a hemorrhage is when blood vessels rupture, often due to an injury, resulting in excessive bleeding. A hemorrhage can be either external or internal, which is harder to detect. Let's take a look at the Advanced Trauma Life Support (ATLS) classification of hemorrhage, along with the symptoms present in each class. 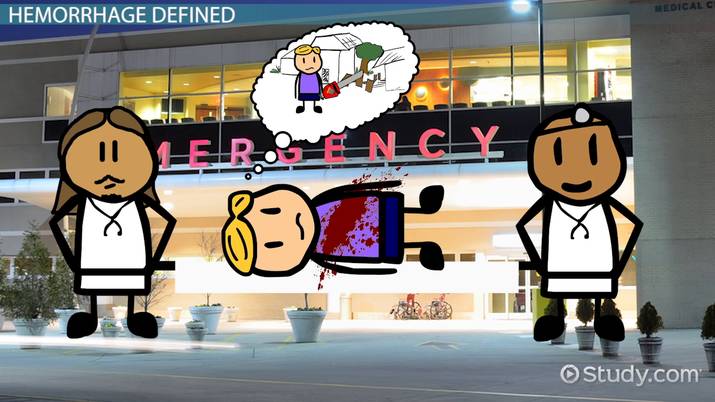 Coming up next: What Is Ischemia? - Definition, Causes & Symptoms

ATLS classes divide hemorrhage into four classes, based on the amount of blood lost. These four classes increase in severity, with Class 1 the least severe and Class 4 the most dangerous.

The adult human body contains roughly five liters of blood. In the Class 1, or minimal stage of hemorrhage, there is less than 15%, or approximately 750ml, of blood loss. Patients still tend to have normal pulse rates and blood pressure. They are unlikely to have any further major medical problems because of the blood loss. Consider that a blood donation is about 450 to 500ml, and has very few side effects.

Class 2, or mild hemorrhage, is defined as a 15 to 30% blood loss amount. In an adult, this would be equivalent to losing 750 to 1500 ml, which is about the equivalent of one or two bottles of wine.

Symptoms include a rapid heart rate, decreased pulse in the arms and legs, and an increased respiratory rate. The patient might be irritable or mentally altered and combative. His skin might be cooler to the touch and have delayed capillary refill. Urine production may be decreased, and have a higher concentration of other substances than normal. Thankfully for Bill, quick medical treatment means that his bleeding didn't progress beyond this class.

Moderate blood loss of 30 to 40% of total volume is considered Class 3 hemorrhage. This would be like losing a 2-liter soda bottle worth of blood. At this stage, blood pressure will drop, and heart and respiration rates will rise. The patient's mental status may shift to a lethargic or irritable state, and he may experience a diminished pain response. The skin will not only feel cool but begin to lose color.

Severe blood loss, or Class 4 hemorrhage, is defined as blood loss greater than 40%. This class is characterized by severely high heart and respiration rates, along with dangerously low blood pressure. A lethargic state may progress to a coma. The skin and extremities will feel cold and begin turning blue, a condition known as cyanosis. Patients with Class 4 hemorrhage will be unable to produce or pass urine.

A hemorrhage is the term for when blood vessels rupture, often due to an injury, resulting in excessive bleeding. They are classified according to Advanced Trauma Life Support (ATLS) standards. The degree of severity places it into one of four classes, with Class 4 being the most dangerous.

Class 1 is less than 15% of blood volume loss, and is comparable to a blood donation. Class 2 is a blood loss of between 15% and 30%, and can involve additional medical complications such as increased heart and respiration rates, mental status changes, and impaired urine production. Class 3blood loss of 30 to 40% shows an advancement of the Class 2 symptoms. In Class 4, the patient loses more than 40% of blood volume and risks coma, experiences major skin and temperature changes, and can no longer produce urine.