In this lesson we'll review what cloning is. Then we'll look at the pros and cons of two types of cloning - reproductive cloning and therapeutic cloning. We'll learn some of the controversy about the use of stem cells in cloning as well as potential benefits.
Create an account

Look around you. If you're outside or in the library, you probably see other people. You'll notice there is no exact copy of you. Everyone looks different. This genetic diversity, or differences in our genes, are important to the survival of our species. When we reproduce, our genes get mixed up into the sperm and eggs, which combine to make babies that can look completely different from the parents.

However, in cloning, one organism is made that is an exact copy of another. Like photocopies from an original, clones have the exact same DNA as the organism you started with. Cloning doesn't require sexual reproduction. To create a clone, an egg is taken from a donor, and a structure called the nucleus, which holds DNA, is taken out. This blank cell is injected with DNA from the organism to be cloned. The egg is stimulated to divide and form a new organism in a surrogate mother.

Cloning scares a lot of people who imagine armies of identical humans created in a lab; but cloning has important uses. Let's look at the pros and cons of two types of cloning: reproductive and therapeutic. 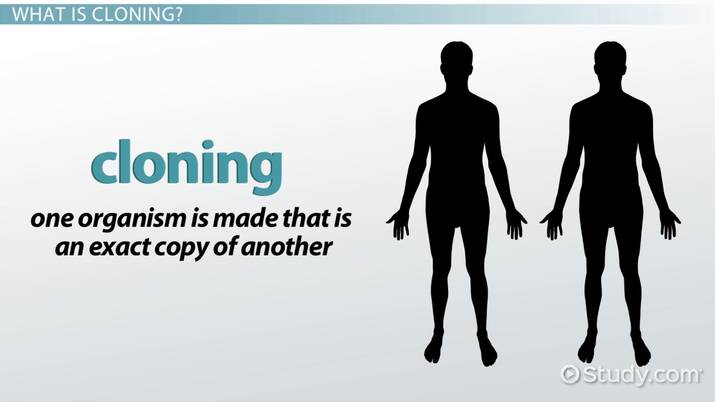 Reproductive cloning is the process of making an entirely new being, not just cells or tissue. Although ethical issues stand in the way of cloning full humans, other animals, like sheep, rats, cats, dogs and even monkeys have been cloned. Monkeys are the closest relative to humans out of all the animals cloned, so the birth of two successfully cloned rhesus macaque monkeys in 1997 was a big accomplishment and provides support to the idea that one day humans could be cloned.

Although highly controversial, human reproductive cloning could be beneficial to society. First, couples who are unable to conceive could still have genetically related offspring. DNA from the parents could be put into a donor egg and developed in a surrogate mother to create a cloned baby.

However, there are serious ethical issues involved in human cloning. Cloning is an incredibly inefficient process. Many eggs need to be used before a successful clone can be made. The process of harvesting human eggs for donation is painful, lengthy and poses health risks to the donor. There is also an increased risk of miscarriage, which can be harmful to the surrogate mother.

Therapeutic cloning is the use of cloned cells to develop treatments for diseases. During therapeutic cloning, a person's DNA is inserted into a stem cell, which is a special type of cell that can become any other type of cell, without a nucleus. Instead of inserting the developing cell into a surrogate mother to form a new organism, these cells are grown in a lab, where they're given specific chemicals that can differentiate the stem cells into the needed tissue.

Tens of thousands of people are waiting for organ transplants as you're watching this. Organs must be harvested quickly after the donor dies and taken to a hospital for transplant within hours. The organ must also be a match to the patient to avoid rejection, a dangerous condition where the body attacks the new organ. Therapeutic cloning makes it possible to sidestep these problems. Using therapeutic cloning, cells from the patient's own body could be taken and the DNA injected into a stem cell. The tissue is then grown in a lab into a new organ, creating a perfect match for the patient with no need to wait for a matching donor.

Therapeutic cloning also has the potential to reverse currently incurable diseases. Parkinson's disease is a condition where neurons, or brain cells, that control your muscles start to die. Neurons do not divide, and so the dead tissue never regenerates. DNA from the person could be placed into stem cells, which can be treated with chemicals to grow into neurons. The new neurons could be inserted into the brain and replace the dead ones, reversing the disease.

Therapeutic cloning sounds like a great idea, but there are some challenges to overcome. The first is the source of stem cells. Many people are against stem cell research because they believe you must kill embryos to obtain them. However, this is not true. Adult tissue, like the intestine, skin, and bone marrow contain stem cells. The umbilical cord, which is normally discarded, is also a source of stem cells. Scientists have also developed techniques to change adult cells, such as skin cells, into stem cells, called induced pluripotent stem cells, which can then be changed into other types of cells like neurons.

However, the reprogramming of adult cells into stem cells is still relatively new technology. There are still questions about how these newly made cells will behave over time. Stem cells divide quickly, and scientists worry the cells could change after implantation into the patient, possibly leading to cancer or uncontrolled cell growth. It is also unclear how the new cells will act in the patient and if they will be able to blend and work together with existing cells.

Cloning is the process of creating an exact copy of an organism. Reproductive cloning has not yet been done in humans, but in animals, DNA from one animal has been inserted into an egg without a nucleus and developed inside a surrogate mother to create a new, identical clone. Ethical issues and the source of eggs have prevented any experiments in human cloning. Therapeutic cloning has the potential to grow custom made organs for transplant or cure diseases like Parkinson's disease. However, there are still questions about the safety of these cloned tissues in humans.

What is a Civil Court? - Definition & Characteristics

When to Use Beside or Besides