Sheara currently teaches undergraduate biology courses and has her doctorate in Kinesiology.

Hypertension is a condition in which an individual's blood pressure is higher than normal. Understand the definition and stages of hypertension, and explore the symptoms and causes of primary and secondary hypertension. Updated: 10/06/2021
Create an account

Close to one-third of adults have hypertension, or high blood pressure, an all too common cardiovascular disease. As we age, the likelihood that we will develop hypertension increases. Let's quickly review how blood pressure is measured, which will make it easier to understand the categories of blood pressure. 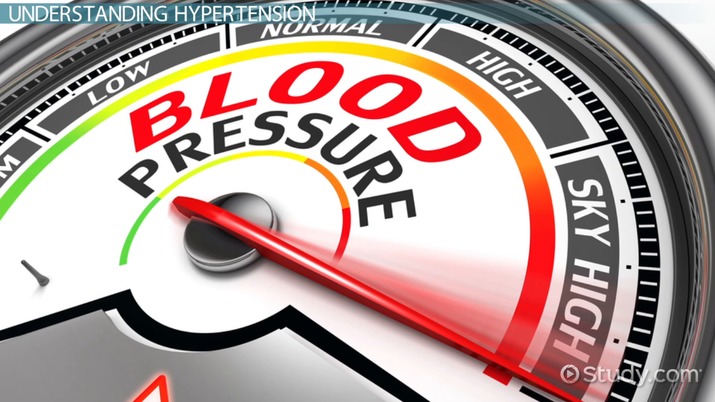 Coming up next: What Is Hypotension? - Definition, Causes, Symptoms & Treatment

If a patient has blood pressure that is consistently above normal, he or she can be further categorized into different stages of hypertension. Here's how doctors classifying blood pressure:

In the case of comorbidity, or the presence of another chronic illness like diabetes or renal disease, a doctor may categorize a patient as hypertensive even if they are considered prehypertensive.

You most likely would not know you have hypertension. In most cases, a person will be asymptomatic, having no noticeable symptoms, which is why this disease is so dangerous. If hypertension is not detected, it can wreak havoc on your cardiovascular system by putting excess strain on your blood vessel walls and heart. In some very rare cases, a person may develop a sudden onset of hypertension, which causes noticeable symptoms. Preeclampsia during pregnancy and severe kidney disease are examples. A person experiencing a sudden onset of hypertension may experience any combination of symptoms that range from severe headache, nosebleeds, and nausea to neurological symptoms, like confusion and blurred vision. These symptoms are signs that blood pressure is dangerously high and requires immediate medical attention.

Since hypertension is normally unnoticed, it is important to understand the causes so that you can take measures to reduce the likelihood of developing or decreasing the severity of hypertension.

Some individuals, especially those who are of African American ancestry, may be genetically inclined to develop hypertension. Primary hypertension is often associated with an individual's lifestyle. Poor diet, especially those high in sodium and fat, increase a person's odds that he or she will develop hypertension, along with habitual drinking and smoking. Additionally, obesity and lack of exercise are linked to hypertension. This is why doctors recommend that people diagnosed with prehypertension or stage 1 hypertension make lifestyle changes to slow or stop the progression of the disease. This can be effective in reducing blood pressure for some people but not all.

How does that happen? The water that is retained has to go somewhere, but where? If most of the retained water remains in the blood, it increases blood volume, and the heart has to work harder to distribute it. Think about your mailperson having to carry and distribute 50% more mail on his or her delivery every day and the subsequent physical changes needed to keep up with this load. He or she may bulk up a bit. Although bulking up a bit may seem harmless, the muscular walls of the heart can become thicker and less pliable.

Disorders that limit oxygen availability to parts of the body and taking erythropoietin (EPO) can also increase blood pressure over time. Both conditions result in the production of excessive amounts of red blood cells. How does increased red blood cell concentration increase blood pressure? Increasing the thickness, or viscosity, of blood makes the heart work harder. Think about how much harder you would have to work to walk through a field with mud a foot deep compared to walking through a pond with water a foot deep. It takes more effort for you to move your body through the more viscous fluid. The heart has to contract with more force to distribute that thicker blood to all of the body parts. The increase in force generated by the heart increases the pressure in the arteries.

Hypertension is a disease in the United States that affects almost a third of the population. Many factors contribute to the development and progression of the disease, making it multifactorial in nature. Hypertension is usually asymptomatic, except in rare case caused by preeclampsia or severe kidney disease which can lead to secondary hypertension. This is why it is so important to have blood pressure routinely checked. If you are diagnosed with primary hypertension, your doctor may suggest making lifestyle changes such as changing your diet, exercising, and giving up smoking.

Stages of hypertension include:

What is Perfusion? | Blood Perfusion & Treatment

Therapeutic vs. Nontherapeutic Communication in Nursing