When the body is attacked by something it deems harmful, a response called inflammation often occurs. Learn the definition of inflammation, its causes, symptoms, and its relationship to the immune system, and examine its components and influences in the body, the relationship between histamine and cytokines, and the short- and long-term consequences that can result from inflammation. Updated: 09/19/2021
Create an account

Picture a nice summer day at the beach. All is well. The sun is out, the breeze is cooling you off and the water is crystal clear. Then you get stung by a bee, and everything goes haywire. Now your day is ruined. At best, you'll have some local pain near where the bee stung you. At worst, you could die. That is all thanks to a very important part of your innate immune system. 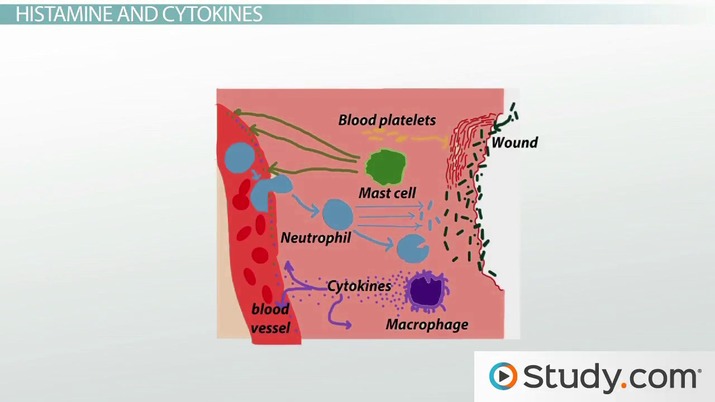 Coming up next: Granulocytes: Types and Functions

This part is called inflammation, and it is a series of defensive biological reactions to harmful agents that leads to pain, redness, swelling and heat in the affected areas of the body. More technically, you may hear that inflammation leads to several cardinal signs called:

All of this shouldn't really come as a big shocker to you. Picture this: the bee landed on your arm and stung you. The physical action of the sting slicing through your tissues sets off nerves that signal pain to your brain. The venom that comes with the stinger is recognized as a foreign substance and sets off a chain of reactions that result in increased flow, or red, hot blood, to the area, and the release of many different molecules by your body's cells.

Some of the molecules released by nearby cells cause additional pain, while others help to create leaky blood vessels. This leakiness of blood vessels leads to the swelling of surrounding tissue and all of these components may, in one way, shape or form, lead to the loss of function of an area affected by inflammation.

This terrible-sounding process isn't warrantless. In fact, the tissues, cells and chemicals secreted by the cells that lead to inflammation are very important. For example, if a little bacteria were to invade your body through a little crack in the skin, your innate immune system would launch the same exact inflammatory response as it would have to a bee sting. That's because the inflammatory process is non-specific; it goes after anything and everything in virtually the same way. Remember that point for just a little while later.

As this little bacteria sneaks into the crack in the skin, your body's cells recognize that there is a foreign invader that shouldn't be there. They release all sorts of chemicals, notably histamine, that cause the blood vessels in the area to become leaky.

This leakiness is super important as it allows for important cells (white blood cells) normally unable to pass through the vessel walls to waltz into the affected tissue, where they can kill the bacteria. If they can't kill the bacteria, they can release molecules used for signaling, called cytokines, to attract bigger or stronger cells to kill the bacteria for them.

Besides white blood cells, the permeability of the vessels, namely capillaries, also allows for fluids to leak into the area. This fluid contains all sorts of proteins, enzymes and other goodies that can help to kill the foreign invader as well.

As this fluid leaks in, the swelling increases, and this in turn causes pressure in the tissues to build up. As the pressure builds up, it compresses everything, including nerve receptors in the area of the swelling. This compression of nerves causes additional pain signals to be sent to your brain.

Think of it this way. You can light a match, like a hot inflammatory response, to try and kill some fleas - the invaders - living in the carpet of your home. You'll burn the fleas alive, all right. But you'll also burn down the entire house in the process as well. The fire is non-specific; it'll burn everything down. Likewise, the inflammatory process, while necessary to fight off infection, can lead to deadly consequences if not controlled, like our house fire.

One notable deadly short-term consequence due in part to the inflammatory response includes anaphylactic shock, which is a severe, potentially deadly and whole-body allergic reaction that occurs with a rapid speed.

For example, people who have been stung by a bee may become overly sensitized to the venom. If they are stung again, the inflammatory response doesn't just produce a local reaction to the bee sting; it goes into overdrive and over-releases substances that are supposed to actually help you. When this over-release of cytokines, histamine, and other molecules occurs, your body begins to shut down due to cardiovascular and respiratory failure. This can obviously cause death within minutes if not treated.

In addition, chronic, or long-term inflammation, has been shown to cause cancer by altering the structure of your body's cellular DNA. If this happens, mutations in the DNA may occur that lead to the cell replicating over and over again without any inhibitory control, which in and of itself is a component of cancer.

With those examples in mind, I hope you can appreciate how, although the inflammatory system tries to help you by getting rid of the venom or bacteria or other foreign substances, it can end up killing you as well if used in too great a quantity or for too long a time.

But let's not focus on the fact that your body might accidentally kill you. Instead, think pleasant thoughts, like the main concepts of our lesson.

Inflammation is a series of defensive biological reactions to harmful agents that leads to pain, redness, swelling and heat in the affected areas of the body.

One notable deadly short-term consequence due in part to the inflammatory response includes anaphylactic shock, which is a severe, potentially deadly, whole-body allergic reaction that occurs with rapid speed. This is because all sorts of molecules, notably histamine, are released. Histamine is a molecule that increases the permeability of blood vessels to cells and molecules.

Other molecules, such as cytokines, are released as well. Cytokines are important as well since they are molecules used for signaling, and this helps to coordinate the process of inflammation between body systems and cells.

When finishing this video lesson, you should be able to:

What is Diphtheria? | Causes, Symptoms & Treatments

Nursing Assessment of the Respiratory System

Necrosis Types & Examples | What Is Necrosis?