Examine leadership ethos to understand how the combination of a leader's logic and passion is important to an organization. Define terms such as ethos, logos, and pathos. Discover more about the collective ethos and discuss the role of ethos in persuasion. Updated: 01/20/2022
Create an account

As CEO of Bluebird Bottleworks, which employs over 40% of the county's citizens, A.J. has a position of very strong influence in his community. In A.J.'s capacity, his word goes a long way. Often, A.J. doesn't even sign contracts. He does a lot of his business locally with just a simple handshake. A.J. has a very strong ethos, and his credibility is beyond reproach.

Leadership ethos is based on the premise that someone like A.J. can get people to do things. In other words, they are persuaded by A.J.'s influence to move forward with a course of action. Say, for example, A.J. wants his staff to become involved in a charity event. If only a few employees participate, A.J.'s ethos would be very weak. If, however, many of the Bluebird employees become involved, we can determine that A.J.'s ethos is very strong. His employees believe in him, his mission, and the collective ethos of supporting the event. 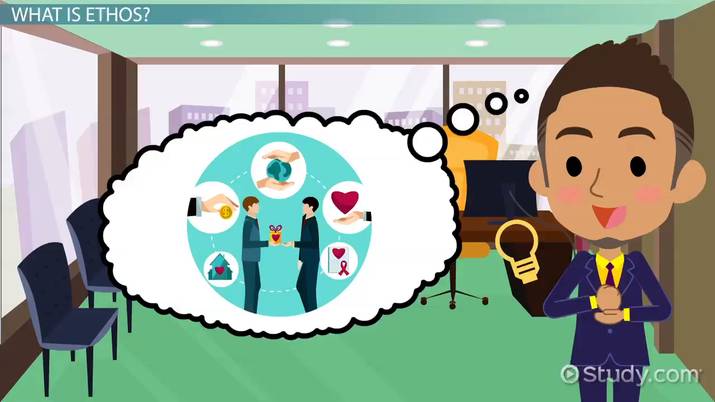 Coming up next: The Communication Process

What Is the Collective Ethos?

A collective ethos is based on the beliefs of a collective group, like a community. For example, every workplace is a community, having its own beliefs and acting upon those beliefs. Some workplaces are very stiff and regimented. Others are very loose and open. In the case of Bluebird Bottleworks, the company believes in giving back to the community. Another company might believe in poaching small businesses, reducing environmental regulation, or making a quick profit. The collective ethos of Bluebird is to invest in the local community.

A collective ethos is important for a leader because someone like A.J. must communicate effectively with his employees. Having a positive influence is what distinguishes A.J. from other less successful business leaders. A.J. essentially transmits his beliefs to his employees through his actions. A.J. is the first one to be at the charity event. He helps organize before, during, and after the event. Being such a visible leader shows employees that he doesn't just talk about being involved, he is involved.

A.J.'s employees are motivated to become involved by his dedication to the charity event. This strengthens the collective ethos of the company by motivating employees to join in a common goal. The collective ethos of Bluebird translates internally, too. When A.J. wants to implement a new department and transfer employees from other branches, his leadership ethos is important. If employees trust in A.J., they will jump on board and support the changes. If they don't, it will be hard to persuade employees that the changes are a good idea.

Role of Ethos in Persuasion?

Ethos is derived from the study of ancient Greek theorist Aristotle. He wrote a treatise, called Rhetoric, in the 4th century. Aristotle's work is considered the most important work ever about persuasion. Given its history, we can consider it an important work on defining leadership, too. Aristotle defined three modes of persuasion, including ethos.

The other two, logos and pathos, are focused on a leader's communication skills. For example, logos tells us whether A.J.'s argument for why the company needs to be involved in the charity event demands attention. Pathos, on the other hand, is defined by how much emotion the audience shows towards A.J. when he makes his argument. We can see from Aristotle's work that logos and pathos are virtually worthless without ethos. Aristotle's historical argument still holds true, that ethos is the foundation on which leadership must be built.

Derived from Aristotle's Greek persuasion theory, ethos is still an important part of modern day leadership. As one part of Aristotle's modes of persuasion, ethos is seen as the most time-tested and important element. Logos, which is based on the leader's logic, and pathos, which looks at the passion a leader brings about from a community can't exist without ethos.

The Role of Government in a Market Economy | Overview, Purpose & Examples

Impact of Technology on Structure & Design of Organizations

Credibility Statement & Examples | How to Establish Credibility in a Speech

Team Leader Role & Responsibilities | What is a Team Leader?

Communications 120: Presentation Skills in the Workplace