Temitayo has 11+ years Industrial Experience in Information Technology and has a master's degree in Computer Science.

Database management systems (DBMS) rely on table structures to accurately store and organize data. Explore how rules are developed to design tables that protect the integrity of data and learn about the types and stages of normal forms using examples. Updated: 03/14/2022
Create an account

As you probably know, a database is often a collection of information or data organized and stored in tables with efforts made to ensure its accuracy and ease of retrieval. During the design process on a database management system, or DBMS, it's of utmost importance that the arrangement of tables and their relation to each other is correct. How data is added, edited, and deleted is also taken into consideration. The table structures, consisting of columns and rows, are important as well. 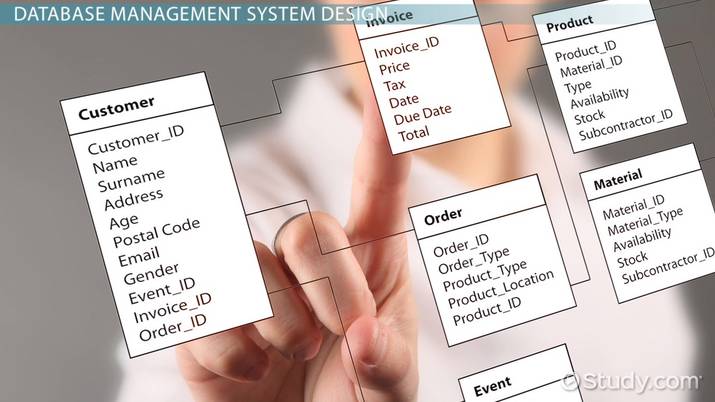 Coming up next: First Normal Form in DBMS with Examples

Why Do We Go to This Length?

Let's look at an example to see why all this is so important. John Tailor (who's last name is spelled with an i not a y) finally gets to go on his dream holiday to Las Vegas. John lodges at a fabulous hotel. Tired from the long haul flight, he woke up late in the middle of the night to discover his room formed a part of the passage to the hotel spa.

The next day, coming in from shopping, he walked to his room and was greeted at the door by a new guest John Taylor (whose last name is spelled with a 'y' rather than an 'i'). His dream holiday is turning into a nightmare and, frustrated, he checks out. So, the question is, how did this mix-up come to be? It looks like hotel design flaws, service disorganization, and data errors are at play.

This isn't different when it comes to DBMS design. As the old computer adage goes: garbage in, garbage out. Poor table relations and erroneous data result in database anomalies, and this impacts information quality. So how do we fix this? We normalize the data.

Normalization is the process of removing existing or possible incidences of anomalies, data redundancies, and data inaccuracy in a database. This limits tables to a particular purpose or entity. In the hotel, for example, a room is a private area exclusive to only one registered guest(s) at a time and shouldn't double in purpose as a passage to the spa or be accessible by more than one spa client.

Let's now talk about each normal form stage in turn:

A table is said to be in 1NF if the following rules hold:

Let's assume you're the new hairdresser in town. You want to store the names and contact details of clients in a database. Your trainee staff creates the following table:

Look closely, and you'll see that the table does not conform to the rules of 1NF. The reason for this is that the trainee staff saved the second mobile numbers of John, Princess, and Robert within the same field which violates rule 1. And, the second entries for Princess and Robert are stored in wrong data format. All the other numbers are saved in number format while their second numbers are stored as strings with numbers and letters, which violates rule 3.

A table is said to be in 2NF if the following rules hold:

Now, let's assume a security firm stores client data according to the category of items in safe custody. Clients can bring in multiple items of different classifications for safe keeping.

As such, the following table is created:

So, this table is in 1NF, as each column contains single values and columns are of identical data types. But, the table is not in 2NF because partial dependencies exist between the primary keys and some of the columns. CustName is dependent on CustomerNumber, but there's no real relation between the customer name and the category of item in safe custody.

Compliance in 2NF would involve separating the columns. We will create a custody table with its own ID, and then link that to the Customer table as a foreign key.

Then the Customer table:

This is close, but we're still not as clean as we can be. Let's look at 3NF, third normal form.

A table is said to be in the 3NF if the rules hold as follows:

Let's go back to the security firm example. Their original table for client addresses looks like this:

The entries for ''street'' and ''city'' are linked through the zip code. This is called a transitive dependency between non primary fields. There might even be two people at the same address, who have items in the safe. The existence of this transitive relationships (or when fields are not entirely dependent on the primary fields) violates rule 2 of 3NF.

You'll notice that data in the CustodyClass field repeat. If we want to get to a true 3NF, we'll need to further break those out into their own tables. Additionally, we will re-focus the database on the item being stored since a customer may have multiple items in the safe.

The table is corrected by separating these relationships into individual tables like this:

Finally, we connect all of this together in the 3NF table by referencing the IDs of the related tables. Now, our structure is 3NF. In order to get to the type of item, you need the customer number from the Items table; likewise the customer ID is joined to the address table.

So, after going over everything, we can say that an understanding of database anomalies makes it easier to understand how the normal forms simplify the data thereby minimizing instances or possibilities of anomalies. As a database is taken through each normal stage, better structured relationships are developed, making the database mistake proof and eliminating possibilities of data discrepancies.

What is the Entity-Relationship Model? - Diagram & Examples

Cells in Excel: How to Insert and Delete Cells

What is an Object-Oriented Database?