Lesson Transcript
Instructor: Elena Cox
The nuclei of some atoms decay by breaking into two smaller, more stable nuclei during a process called nuclear fission. Learn more about the process of nuclear fission and test your knowledge with a quiz.
Create an account

What Is Nuclear Fission? 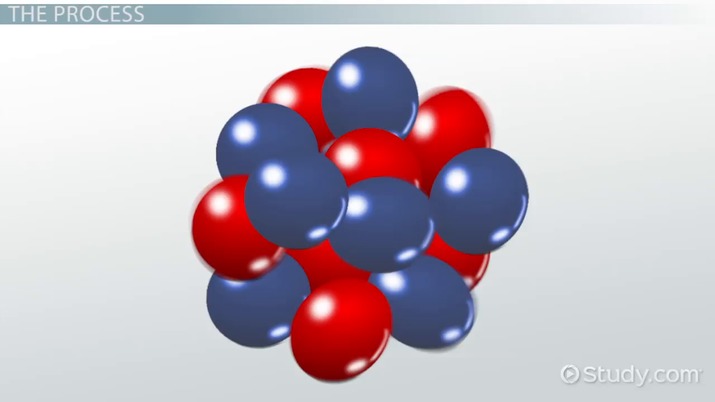 Coming up next: What Is Nuclear Fusion? - Definition & Process

This is Albert Einstein's famous equation relating mass and energy:

This means that any reaction produces or consumes energy due to a loss or gain in mass. Energy and mass are equivalent. Note that because c to the second power is large, a small change in mass results in a large change in energy. When nucleons, or particles that comprise atomic nucleus, combine together to form an atom, the energy is released. Corresponding to the mass defect, the mass of the nucleus is always less than the sum of the masses of the individual protons and neutrons that comprise it.

The following figure shows the binding energy as a function of the mass number.

Binding energies in this figure indicate that heavy nuclei tend to be unstable. To gain stability, they can fragment into several smaller nuclei. Because atoms with mass numbers around 60 are the most stable, heavy atoms (those with mass number greater than 60) tend to fragment into smaller atoms in order to increase their stability. The splitting of a nucleus into fragments is accompanied by a very large release of energy.

The figure represents the process of nuclear fission when a neutron strikes a uranium-235 nucleus. Barium-141 and krypton-92 are just two of many possible products of this fission reaction. In fact, scientists have identified more than 200 different product isotopes from fission of a uranium-235 nucleus.

The elements barium and krypton are typical results of this fission. The energy released by each fission can be found by calculating the masses of the atoms on each side of the equation. In the reaction we just saw, the total mass on the right side of the equation is 0.186 amu smaller than that on the left. The energy equivalent of this mass is 2.78x10^-11 J, or 173 MeV. This energy appears as the kinetic energy of the products of the fission.

Each fission of uranium-235 releases additional neutrons, as shown in this figure.

This situation in the figure above is one type of nuclear chain reaction; a continuous series of nuclear fission reactions, a self-sustaining process in which one reaction initiates the next.

The number of fissions and the amount of energy released can increase rapidly. In an uncontrolled chain reaction, huge amounts of energy are released very quickly, as shown here.

In fact, the tremendous energy of an atomic bomb is the result of an uncontrolled chain reaction. In contrast, nuclear power plants use controlled chain reactions. The energy released from the nuclei in the uranium fuel is used to generate electrical energy. A common fuel is fissionable uranium (IV) oxide (UO2) encased in corrosion-resistant rods. U-238 is the most abundant isotope (99%) of uranium. U-235, which makes up 0.7% of the natural uranium, has the rare property of being able to undergo induced fission. U-235 atoms undergo fission when hit by a neutron. The fuel used in nuclear power plants is enriched to contain 3% uranium-235, the amount required to sustain a chain reaction, and is called enriched uranium. Additional rods, often made of cadmium or boron, control the fission process inside the reactor by absorbing neutrons released during the reaction.

Keeping the chain reaction going while preventing it from racing out of control requires precise monitoring and continual adjusting of the control rods. Much of the concern about nuclear power plants focuses on the risk of losing control of the nuclear reactor, possibly resulting in the accidental release of harmful levels of radiation. The Three Mile Island accident in the United States in 1979 and the Chernobyl accident in Ukraine in 1986 prove examples of why controlling the reactor is critical.

Let's review. The nuclei of some atoms can break down into two smaller, more stable nuclei during a process called nuclear fission. Heavy nuclei with mass number greater than 60 tend to be unstable and split into smaller nuclei with a release of energy. Nuclear chain reaction is a continuous series of nuclear fission reactions; a self-sustaining process in which one reaction initiates the next.

When this lesson ends, students should be able to:

What Is Nuclear Fusion? - Definition & Process

What is a Quark? - Definition, Structure & Uses

What is a Diode? - Definition & Types