Copyright
Lesson Transcript
Instructor: Mary Lou Perin
This lesson covers the definition of pancytopenia and compares it to aplastic anemia, a condition that presents itself in a similar way. It discusses its known causes, the signs and symptoms, and treatment.
Create an account

These three cell types develop from one basic cell, a stem cell or immature starter cell manufactured in the bone marrow. When there is a decrease in red cells, it causes anemia. Similarly, a resulting decrease in white cells causes leukopenia, while a decrease in platelets causes thrombocytopenia.

Because pancytopenia is simply a medical finding, not a disease, it must be investigated further to determine the cause. This is done by taking a sample of bone marrow, called a bone marrow aspiration. It may show either a bone marrow that is making blood cells but they are decreased in the peripheral blood stream (pancytopenia), in which case, the physician becomes a detective to find the whereabouts of the cells. However, the bone marrow biopsy may show a marrow, which is essentially empty of red and white cells and platelets. This indicates a defined disease known as aplastic anemia, a much more serious condition. This process of determining what is the basic problem is called a differential diagnosis. 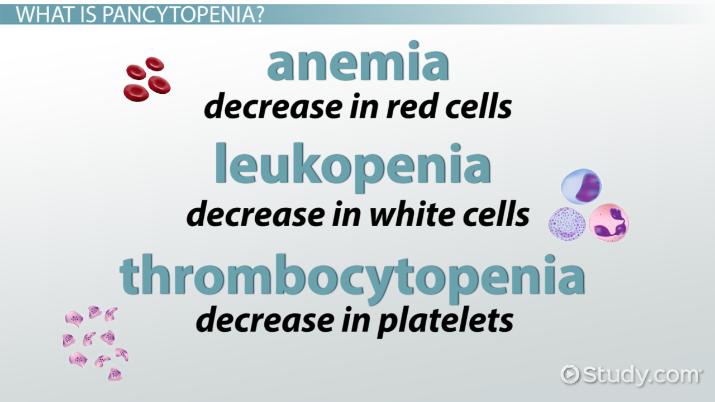 Coming up next: What Is Phlebitis? - Definition, Symptoms & Treatment

In about half the cases of pancytopenia, the origin is unknown or idiopathic. However, in some cases the cells are being produced but are sitting in the spleen and not circulating. When they congregate there it causes splenomegaly or 'enlarged spleen'. The physician then must pursue why that is happening. Other internal causes can be an inherited disorder or a dysfunction of the immune system. In an immune system disorder, the body identifies normal body elements as foreign and begins to destroy them. Or the problem can be external; for example, antibiotics and drugs that suppress the immune system or exposure to environmental contaminants such as asbestos and benzene which impact cell development. Finally, chemotherapy and radiation treatments for cancer can be culprits in cell depression.

Some of the risk factors for developing pancytopenia are a family history of blood disorders, lupus or certain other autoimmune disorders, chemotherapy and radiation treatments, pregnancy and exposure to environmental toxins.

Understanding the role of each type of blood cell helps us understand what the symptoms of their deficiency would be. Because red blood cells carry oxygen to cells, a reduction in the number of red blood cells causes shortness of breath and rapid heartbeat, or tachycardia. As the heart races to increase the volume of blood circulating to make up for the decrease in the amount of oxygen-carrying cells, the result is paleness or pallor to the skin as well as fatigue and weakness, which can compromise a person's ability to perform daily activities.

Because white blood cells help the body fight infection, the absence of these cells makes the body prone to develop infections, which can be severe and life threatening.

Finally, the role of platelets in blood clotting means a reduction of these cells may result in bleeding from the nose and gums and frequent bruising. Internal bleeding is also common. More serious symptoms, such as confusion or loss of consciousness, may indicate bleeding in the brain.

Symptoms of a reduced cell count can be continuous or periodic and mild or severe.

The first step in treating pancytopenia is to determine the cause, since each cause may be treated differently. If possible, the cause, such as an environmental toxin, is removed. Once that is done, the condition may resolve itself. In the case of chemotherapy, the treatment may be temporarily delayed until blood counts return to normal. Because pancytopenia is a known side effect of chemo, it can also be treated preventively with bone-marrow stimulating agents such as Neupogen and Neulasta that boost the body's ability to produce white blood cells. Epogen and Procrit can be used for increasing red cells.

Transfusions may also be given to replenish the number of circulating cells. Over time, transfusions may become less effective because they do not address the underlying cause of the decreased cells. More extreme measures include bone marrow transplant and stem cell therapy; these aim to treat the underlying condition by replacing inactive bone marrow with marrow whose capacity to produce stem cells is still functioning. These procedures are themselves physically challenging and require intensive nursing care.

Left untreated, pancytopenia is extremely serious and can lead to life-threatening bleeding, such as brain hemorrhage or sepsis, a severe bacterial blood infection. Treatments themselves are potentially dangerous, such as infections from blood transfusion or transfusion reactions, as well as medication side effects. Bone marrow transplant failure or graft rejection can occur.

Let's review! Pancytopenia is a medical finding that occurs when the number of red and white blood cells and platelets is reduced below the normal range. The absence of sufficient blood cells can lead to infection, bleeding, and other complications. Treatments include removing the offending agent, giving drugs to reduce the immunosuppressant response, transfusion, and in some cases, bone marrow transplant.

What is Thrombocytopenia? - Definition, Causes & Treatment

What is Leukocytosis? - Causes & Types

What Is Eclampsia? - Definition, Symptoms & Treatment

What is Leukopenia? - Causes & Types

What are Burr Cells? - Causes & Significance

What Is Hemolysis? - Definition, Causes & Symptoms