Income per capita is the average earnings per person in a geographic region, such as a city, state, or country. Learn how to define income per capita, discover how it's calculated, review its accuracy, and then explore an example of how it works. Updated: 04/13/2022
Create an account

Definition of Income Per Capita

Have you ever moved? Have you done any research about the area prior to the big move? While the population, the climate, and the list of things to do are often some of the most researched factors to consider, other factors that might also come to mind are jobs and income. Are there jobs available in the area you are moving, and if so, what can you expect to earn? Possibly the quickest way to answer these questions is to look at the income per capita for the area.

So you may be asking, what is meant by income per capita? Well, income per capita is basically the amount of money per person in a specific area. More specifically, according to the United States Census Bureau, it is the money earned by every man, woman, and child in the last 12 months for a specific geographic area. Often, the income per capita is calculated for cities and even countries so that we can see what it may be like to live in those areas. It helps us address issues like the quality of life and the living conditions we can expect for specific areas. 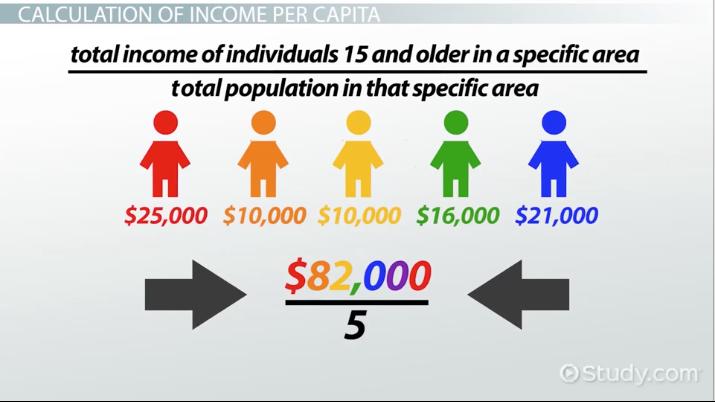 Coming up next: What Is Residual Income? - Definition, Model & Formula

Calculation of Income Per Capita

Now that we know what income per capita is, let's look at how it is figured. First, a survey is taken in order to look at a specific period of time. The survey consists of individuals reporting their income from a variety of sources, such as salary, social security, dividends, welfare, disability and retirement, to name a few. The second step is to plug the information from the survey into the following math equation:

Let's now look at an example utilizing this equation. Suppose we want to figure out what the income per capita is for the city of Walcott. We first need to figure out the incomes of everyone that lives in that town.

Now that we have looked at an example to demonstrate how income per capita is calculated, you may be wondering if the number is accurate. Well, the answer is, not always.

You see, if one person is making $300,000 and 50 people are making $10,000, the income per capita is $15,686. However, that doesn't accurately represent the population since that number is higher than almost everyone in that area makes. The one individual that makes $300,000 has skewed the number and does not accurately indicate the living conditions as income per capita is said to do.

Also, because the income of those in the area are collected through a survey, it is difficult to know how many individuals are correctly reporting their income, and if they are including all sources that fall within the income category.

In the end, income per capita (calculated by dividing the income from all those 15 and older living in the specific area by the population from that same area) is a way learn about a specific demographic area. While it may not be completely accurate, it helps give a picture of those working in the area.

By calculating per capita, someone looking to relocate can have a brief overview of what life might be like in their new perspective home.

What is Per Capita Income? - Definition & Example
Related Study Materials

Marginal Propensity to Consume Formula | How to Calculate MPC

Developed Countries List & Overview | What is a Developed Nation?