Phenylketonuria, or PKU, is a rare disease that prevents people from being able to break down certain amino acids. Define PKU, then look at its symptoms, treatment, and how it is inherited. Updated: 11/24/2021
Create an account

High-protein diets are all the rage right now. Diets high in protein and low in carbohydrates will help you get strong and lean, right? Well, not for some people! For some individuals with a rare metabolic disorder, protein is toxic and should be nearly eliminated from their diet. Want to know more about this disease, where carbohydrates have become an ally? Keep reading!

The disease is called phenylketonuria, or PKU. In this disease, people have a rare metabolic defect in which they cannot break down the amino acid phenylalanine. Amino acids make up proteins, which are in foods we eat such as meat, eggs, or diary.

Since those with PKU cannot break down phenylalanine, it starts to build up in their blood. Eventually, this amino acid starts to cause brain damage. If not treated, the damage may be irreversible. Imagine if you had a factory where you broke down boxes into pieces of cardboard and then recycled them. If one of the machines that takes apart the boxes broke, the boxes that were just entering the factory would build up. Eventually, the factory would get so backed up that things would break down. This is what's going on in the brains of people with PKU. The phenylalanine starts to build up, and the person's brain stops functioning correctly. 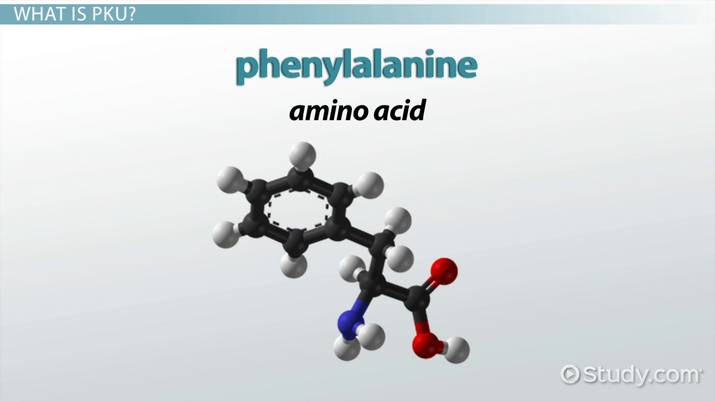 Coming up next: Basal Cell Nevus Syndrome and Treatment

How Is PKU inherited?

PKU is a genetic disorder, meaning it is inherited from one's parents. The disease is autosomal recessive, meaning the person must inherit one defective copy from each parent to get the disease. If one parent has the mutation, or defective gene, and the other doesn't, the child is safe from inheriting PKU.

What Are the Symptoms?

If caught early enough, the symptoms of PKU might not develop, and the baby can have a healthy life. There are several lifestyle changes that people with PKU need to make, most notably in their diet. There's no high-protein fad diets here, just a focus on fruits, vegetables, and low-protein grains for people on the PKU diet. People with PKU also need to get tested regularly for blood levels of phenylalanine.

Certain drugs can be used in conjunction with a low-phenylalanine diet. Currently, sapropterin is approved for treatment of PKU. This drug works to help patients break down phenylalanine. Although it does not cure a person, it can be used alongside the PKU diet.

In summary, phenylketonuria, or PKU, is a rare metabolic disease in which a person cannot break down the amino acid phenylalanine. Consequently, phenylalanine builds up in the person's brain and can cause severe neurological damage, resulting in intellectual impairments, hyperactivity, seizures, and mental health disorders. Fortunately, all babies in the United States and Canada are tested at birth, since there are no symptoms in newborns. PKU can be treated with a special low-protein diet and a prescription drug that increases a person's tolerance for phenylalanine.