In the present day, there is a serious conflict being waged by religious extremists in the Middle East. Some people see groups, like ISIS or Al Qaeda, as a terrorist threat to democracy, while others might sympathize with them or even support their cause. For most of us, it can be very hard to understand how someone could participate in a terrorist act, but it almost always has to do with a concept known as political socialization.

In the fields of the political sciences, political socialization is the process through which a person develops political beliefs and opinions that influence their behavior in social spheres. For example, if Tom was a member of the Democratic Party, he didn't just happen to join the group by accident; rather, over the course of his life, he had developed a set of political beliefs that have led him to align himself with a party whose beliefs matched his own. 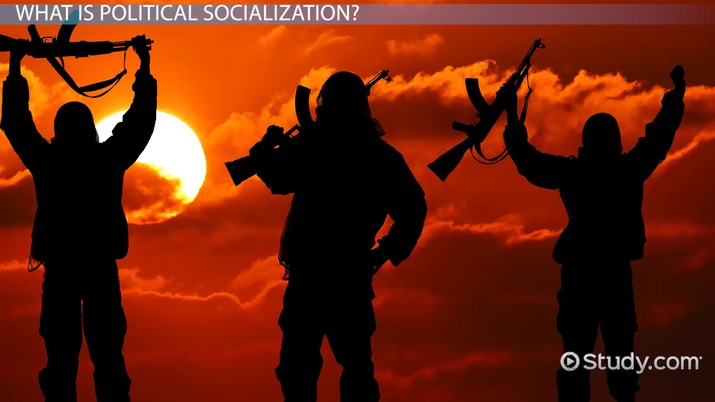 Coming up next: What is Public Opinion? - Definition & Examples

Like any other subject on which people develop opinions, many factors contribute to a person's political socialization. Because it is a development that occurs over the course of many years, the extent to which these factors influence a person often depends on the stage of development they are in at the time of the influence.

Next to our families, the media is the most significant influence on our beliefs because it is often the way in which we acquire information about the world. The media has a strong ability to influence or validate our political beliefs and opinions.

Our school environments are an important influence because they are places in which we spend a considerable amount of time and where we are exposed to new ideas, different people, and belief systems.

Like schools, our workplaces occupy a significant amount of time and are often the place that we are most likely to encounter new ideas as adults.

How We Become Politically Socialized

Rather than being the result of just one or two influences, our political socialization is a combination of the previous factors working together to produce our belief systems. For example, if you were raised in a politically conservative household, it is very likely that your parents' conservative beliefs would influence your early understanding of politics. When we are very young, we often have nothing to compare our parents' beliefs to and no reason to believe that they are wrong, which leads us to adopt similar opinions. Similarly, we tend to gravitate more towards media - like films, newspapers, or television - that validates or strengthens our beliefs, rather than challenges them.

As we gain more independence through our time away from our families, like we would by going to school, we are exposed to the influence of our peers or adults for whom we have respect. Because we have already developed a certain understanding of politics, we are likely to associate with those whose beliefs are similar to our own, or who validate what we already believe.

In democratic countries, children are taught to value their voting rights, which encourages them to participate in the political process.

As adults in the workplace or other social situations, it is entirely likely that our political beliefs are already firm in our minds and are unlikely to change due to the beliefs of those around us. Nevertheless, our experiences at work or through other relationships may strengthen or weaken our beliefs based on what we see and hear in those environments.

For example, a politically conservative and highly religious social worker might develop stronger conservative beliefs based on their experiences with low-income or at-risk populations; or they may find themselves becoming less conservative for the same reasons. Conversely, if a person was raised by parents who had no interest in politics, it is likely that they would not gravitate towards politically-minded people or media and are unlikely to develop strong political opinions either way.

In the simplest terms, political socialization is the process through which a person develops a set of political beliefs and opinions. While this begins with and is most heavily influenced by our parents, it's also influenced by the types of media that we consume, the beliefs of our peers in schools and workplaces, and the religion with which we might align ourselves. In most cases, these factors work together to help us develop our political beliefs, but for people who are not exposed to these influences, they may not develop strong political beliefs at all.

After you finish this lesson, you should be able to:

Example: You could write about which presidential candidate you plan to vote for in the next election, and then systematically explain how family, the media, your school and education, your religion, and your work experience has led you to this decision.

Choosing three of the factors that contribute to political socialization, write an essay about a scenario that shows how a person's political views might evolve depending on these factors.

Example: A recent college graduate (education) who grew up in a politically conservative home (family) is re-evaluating her political beliefs and shifting to a more liberal stance, especially after working at a tutoring center for under-privileged children (workplace).

Create a chart or other type of graphic organizer in which you list and define all of the factors that contribute to political socialization.

Example: You could draw a group of stick figures to represent a family, and then, in text next to it, note that family has the most significant influence on political socialization. Then, you could draw a TV or computer to represent the media, and note in text next to it that media represents how we acquire information about the world and that people tend to gravitate towards media that is more in line with their own belief system. Make sure you depict all the factors.

What is Disarmament? - Definition, Conferences & Meaning

What is Citizenship Education? - Definition & Types

What is Constitutionalism? - Definition, History & Concept