Copyright
Lesson Transcript
Instructor: Sarah Phenix
Prothrombin Time (PT) is the measurement of the time blood takes to coagulate to a thrombus (blood clot). Learn the procedure and normal range of PT, as well as the composition of blood itself that contributes to the difference in these measurements. Updated: 10/15/2021
Create an account

If you've ever watched a surgical TV show, you've probably heard the doctors call for a tool called a hemostat, or surgical forceps used to clamp blood vessels. Interestingly enough, the term 'hemostat' means to stop ('stat') bleeding ('hemo'). Our bodies have their own natural hemostatic ability to form blood clots, also known as coagulation or a thrombus. So what does any of this have to do with 'prothrombin time,' you ask? Well, lucky for you, that's the very question we're here to answer. 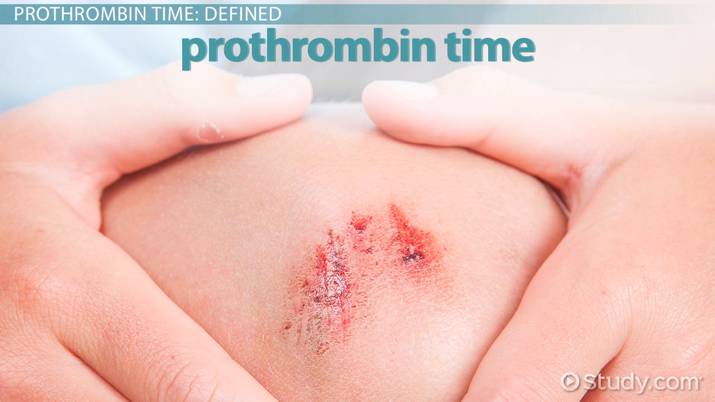 Coming up next: Anatomy and Physiology of the Mouth

Prothrombin time (PT) is pretty much what it sounds like. It's a measure of the amount of time that it takes for your blood to produce a thrombus or a blood clot. So why might this be important? Well, blood clots close exposed vessels by forming a scab on your skin. Simply put, blood clots keep us from bleeding out when we get a cut or scrape. Therefore, a prothrombin time test evaluates whether or not your blood clots at a normal rate.

A prothrombin time test may take the form of either a finger prick or a blood draw. There are actually a variety of tests that laboratories can use to calculate a patient's prothrombin time, each of which operates on its own scale of what a normal range is, making comparing results between laboratories really hard. You're essentially comparing apples and oranges by comparing results between laboratories. Consequently, an international standard, known as the International Normalized Ration (INR) was developed, which provides a universal normalized prothrombin range accounting for any influence that different PT tests may have on the test results. The normalized INR range allows values between laboratories to be readily compared without concern for accounting for their different testing methods. Thanks to this much simpler INR conversion, most labs will now only report using the INR format, which dictates a normal range of 0.8 to 1.1 and loosely translates to 11 to 13 seconds.

What does this time frame mean? Well, it means that it should take anywhere between 11 and 13 seconds for a drop of a healthy person's blood to coagulate. Now, keep in mind that blood thinners, like aspirin, can lengthen the prothrombin time. This is why you may have noticed people at risk for heart attack or stroke taking aspirin. It thins their blood to help avoid blood clot formation. If a clot is formed and released into the bloodstream, it could result in a blockage leading to a heart attack or stroke.

A longer-than-normal PT test could indicate a range of issues, including a vitamin K deficiency in your diet. Vitamin K is required by the liver to produce prothrombin, which is one of five clotting proteins that a PT test evaluates. A longer PT test could also indicate cirrhosis of the liver, or liver disease, as the liver produces each of the five clotting factors that a PT test evaluates. To better understand what this all means, let's go back and take a look at the basic components of blood and the process of clotting

Our blood is composed of formed elements, or the living components of blood that include erythrocytes, or red blood cells; leukocytes, or white blood cells; and thrombocytes, or platelets; and a non-living component called plasma, or the fluid that blood cells float in composed of water, proteins, and electrolytes. Now, did you notice the term for platelets is thrombocytes? That's because they are cells ('cytes') whose main function is the formation of blood clots ('thrombo').

So, how does a blood clot form? Well, for example, when you fall and skin your knee, first the smooth muscles of your damaged blood vessels begin to spasm to constrict or reduce blood flow to the area. Concurrently, the platelets in your blood begin to gather in the damaged area. The damaged skin cells begin to secrete a substance called von Willebrand factor, making the accumulating platelets stick to the wounded skin. Lastly, your blood undergoes something called a coagulation cascade, where a series of different proteins, known as clotting factors, cascade through a series of interactions that result in the conversion of a particular protein called fibrinogen. Fibrinogen is converted into fibrous strands, called fibrin. The fibrin begins forming chains and collecting in and around the platelets, forming a mesh-like structure that traps larger blood cells and aids in completing the clot formation.

To review, prothrombin time is a test that measures the amount of time that it takes for your blood to produce a thrombus, or a blood clot. A normal PT time ranges anywhere from 0.8 to 1.1 seconds, meaning that it takes 0.8 to 1.1 INR, or 11 to 13 seconds, for a drop of healthy blood to coagulate. A PT test evaluates whether a patient's plasma, or the fluid blood cells float in that's composed of water, proteins, and electrolytes, has the appropriate levels of clotting factors, such as prothrombin. These clotting factors are used in the coagulation cascade process, where clotting factors cascade through a series of interactions resulting in the conversion of fibrinogen into fibrin. Once formed, fibrin begins linking into chains that knot together in a mesh around thrombocytes, or platelets; trapping larger blood cells such as erythrocytes, or red blood cells; and leukocytes, or white blood cells, thus completing clot formation.

What Is Thrombosis? - Definition, Symptoms & Treatment