Mary Beth has taught 1st, 4th and 5th grade and has a specialist degree in Educational Leadership. She is currently an assistant principal.

Learn about puberty, a stage of development between childhood and adulthood. Discover the changes that occur during puberty, different changes for males and females, and the glands and hormones responsible for the changes. Updated: 01/03/2022
Create an account

Peter Pan may have been able to stay a boy forever, but that's just a fairy tale. In the real world, children grow into teenagers and then adults. This maturing process from childhood to adulthood is known as puberty.

During puberty, your body is growing and changing in many different ways. For girls, this typically begins between the ages of 8 and 13 and 9 and 15 in boys. As everyone experiences puberty differently, you might meet one 13-year-old who looks much older than another 13-year-old. This just means that one of them is further along in the puberty process.

There is a special part of your brain that is responsible for the changes associated with puberty called the pituitary gland. While the pituitary gland is small in size - about the size of a pea - it is mighty in power! It releases hormones into your body, which are substances that control the way you act, look, and feel. 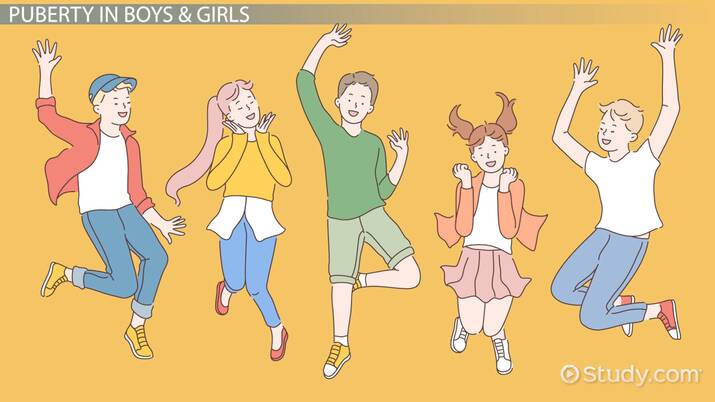 Coming up next: Sexual Reproduction Lesson for Kids

One of the major hormones released during puberty in girls is called estrogen, which helps a girl turn into a woman. Here are some of the changes that a girl going through puberty will experience:

Boys become men because of one particular hormone: testosterone. Testosterone can lead to many changes in a boy's body, including:

While puberty is significantly different for boys than girls, there are some similarities, as well. Here are just a few examples of the changes everyone can experience during puberty:

Puberty happens when changes occur in your body as you grow from a child to a teenager into an adult. Your pituitary gland is a special part of your brain that causes changes in your body by producing hormones, substances that control the way you act, look, and feel. Changes for boys and girls are different, with no two human beings experiencing puberty the exact same way. Boys begin making a lot of the hormone testosterone, while girls make more estrogen, the hormone that turns a girl into a woman.

Create an account
What is Puberty? - Lesson for Kids
Start today. Try it now
Biology for Kids

What is Puberty? - Lesson for Kids
Related Study Materials

From Misuse to Abuse: Distinction & Effects

Sexual Development and Maturation of the Adolescent