Juli has traveled the world engaging in cultural immersion experiences that bring her Master of Liberal Studies findings to light.

What Is Religious Belief?

In order to define religious belief, we should start by defining religion in general. Religion is the entire collection of beliefs, values, and practices that a group holds to be the true and sacred. A group's religious beliefs explain where the people fit in relation to the universe and how they should behave while here on Earth.

Religious belief is a crucial part of that larger concept, and it is distinct from religious practice. Maybe you know someone who is very spiritual and teeming with beliefs, but who does not practice any religious rituals or engage in any other outward signs of religion. On the other hand, don't you know someone who attends church every Sunday but who doesn't really believe the full meaning of the words as he is saying in prayers? We call this 'going through the motions.' 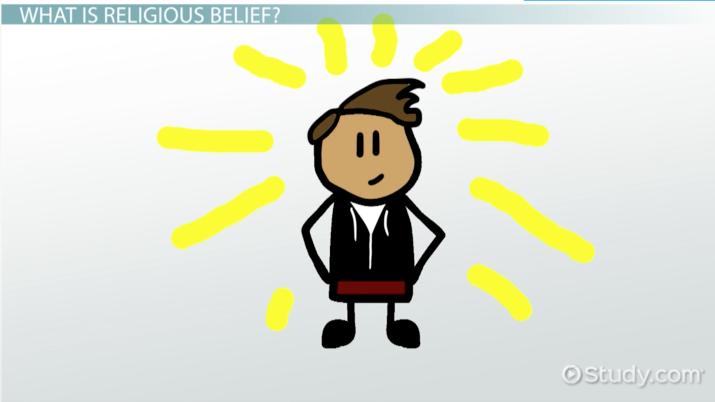 Coming up next: Shaman: Definition & Talents

Every human civilization that we know about has had religious beliefs of some sort. Most of this evidence comes in the form of burial inscriptions or other artifacts found by archaeologists. Why is religion so important that every society had one?

Religious beliefs serve a social function in human groups, providing a shared identity of where people came from and where they are likely going after death. Every person who has walked the earth has probably wondered 'What is my purpose in life?' 'What or who is up there in the sky?'

In an often chaotic world, full of seemingly inexplicable violence and unforeseen disasters, religious beliefs can fill the gap and provide meaning and comfort. When a baby suddenly dies, people want answers. When the drought ruins the only food crop for the fifth year in a row, people want to feel like they can change the course of nature by engaging in ritual sacrifices or dances.

One Size Does Not Fit All

While almost every religion contains the common elements of a creation story, an end-of-world prophecy, and a code of ethical laws to live by, there are noteworthy variances in religious styles. A 19th century paradigm of evolutionary religious organization argued that cultures naturally moved from animism to polytheism to monotheism; however, more recent religious studies have revealed that this progression is not a hard and fast rule.

Sure, many ancient civilizations believed in animism--that all natural objects, such as trees and rocks, have an inherent value and even a life force--and many modern societies are dominated by monotheistic faiths--religions that argue for the existence of only one God--but there are certainly exceptions. Also, think about Hinduism, which can be argued by religious scholars as either monotheistic--one deity--or polytheistic--multiple gods.

So how do we reconcile all of these beliefs? We don't. Instead, we realize that religious beliefs serve an undeniably important function in human societies, both ancient and modern. Part of human identity is the basic need to categorize the space around us and bestow meaning on unexplained natural events. Additionally, psychologists explain that people have a tendency to see intelligent design in the natural world. This is related to the concept of anthropomorphism, which is when people give human characteristics to non-human creatures or land features.

Today's religious beliefs vary considerably in detail, and they have a higher propensity to bump into one another than ever before. In our modern, interconnected, global society, people are moving around and taking their religious beliefs with them. If we recognize that each religion has inherent worth in that it provides its community members with meaning, comfort, and purpose, then we might not feel such a need to convert everyone to one religion in particular.

Mircea Eliade, a 20th-century Romanian religious scholar and philosopher, explained that all people are essentially trying to sort out the world into two categories--the sacred and the profane. Similarly, the concept of the monomyth reveals that all individual myths generally follow along with one archetype: Person has lost his way in life. Person receives a supernatural encounter. Person overcomes evil and shares his good with the rest of the community, making the world a better place.

Today's Information Age offers an abundance of information on any religious belief currently known to humanity. It's common now for a person to change religions throughout the course of his or her lifetime, which would have been extremely rare in the ancient world, when everyone you met in your lifetime was limited to your own cultural group.

Some ancient religious beliefs are still in practice today, such as the Eastern traditions of Confucianism, Daoism, and Buddhism, and are largely being accepted by those in the Western world. In fact, modern science is beginning to explain a universal energy--a basic tenet in religious beliefs of such groups as Daoists--in concepts such as string theory.

Additional categories and terms have made their way into the check-list of identifying options, such as 'Athiest' or 'Agnostic.' Atheists reject the belief of a God or gods, while Agnostics argue that it is impossible for a human to know if there is a God or not. Indeed, the psychological factors related to religion are being studied at unprecedented levels; religious belief is seen as a delicate interplay of neuroscience and anthropology by biological and social scientists alike.

Let's review! Religion is the entire collection of beliefs, values, and practices that a group holds to be true and sacred. A group's religious beliefs explain where the people fit in relation to the universe and how they should behave while here on Earth. Religious beliefs serve a social function in human groups, providing a shared identity of where people come from and where they are likely going after death.

Today's religious beliefs vary considerably in detail, and they have a higher propensity to bump into one another than ever before. In our modern, interconnected, global society people are moving around and taking their religious beliefs with them.

Pick two of the following prompts and write between 400-600 words in response to each.

What Is (Your) Religious Belief?

The lesson identified several elements that many religions share: a code of ethics to live by, a creation myth, and end-of-the-world prophecy. Pick one of the three and research this element in three different religions of your choosing. How are they different? How are they similar?

As the lesson said, religious beliefs cannot all be reconciled, but should all be respected. Many monotheistic religions assert their beliefs are the truth, and it is perfectly good to believe this about your own, but it is important to consider where your own beliefs or non-beliefs come from and understand that someone else's beliefs come from places equally important to them. With this in mind, research another religion and its instructions for how followers should live. What elements are similar to your own beliefs? What are different? (If you picked this prompt and the ethical code option for "Common Elements," choose different religions to research and compare.)

Explore the intersection of religion and other fields in today's world. For example, you might delve deeper into the lesson's example of religion and string theory, or read a study on religion and chaos theory in mathematics, or how religion affects mental health.

Look up a current event in the news that is connected to religion. Read several news sources and provide a summary of the story. However, you cannot research a current event in your own country or that pertains to your own religious beliefs or lack thereof.

The Relationship Between Speaking & Reading

Maintaining the Confidentiality of Student Records

Rituals & Rites of Passage in Society

The Qur'an and the Hadith: Islamic Revelation

Polygamy History & Significance | What is Polygamy?

The Relationships Between Morality, Law & Religion