Essentially, right realism points a finger of accusation for the cause of crime, but the theories are in need of explanation. Right realism has met some significant opposition, especially in progressing political climates. Updated: 06/23/2022
Create an account

What Is Right Realism?

In the United States in the '70s and '80s, crime rates were rising. Conservatives had a responsibility to curb crime and its impact on victims, which brought about the ''tough on crime'' era that was heavily enforced through the Reagan, Bush, and Clinton administrations, with the effects continuing on through the Bush Jr., Obama, Trump, and Biden administrations into the 21st century.

The primary perspective of right realism theory is that crime is a problem that affects the poor, meaning that poor people are essentially the reason for crime. Right realists and conservatives believe that tough control and punishments are the only way to stop criminal trends.

Many of the harshest criminal punishments for even non-violent criminals emerged from this era. Reagan's ''war on drugs'' and mandatory minimum sentences, along with President Bill Clinton's 1994 Crime Act were just a couple of practices put into place in an effort to solve the crime epidemic. Right realists established that there were three major causes for crime:

Ronald Reagan pushed legislation to be tougher on crime based on the right realist theories proposed by political scientists. The trends continued and include President Bill Clinton's and future President Joe Biden's, as it happens, 1994 Crime Bill, also known as the three-strikes law, which incarcerated people for life upon conviction of a third violent crime or serious felony. 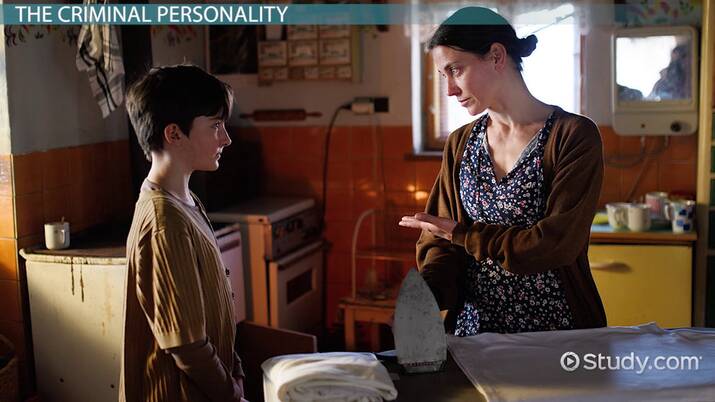 Try it now
Back
Coming up next: What is Probate Court? - Definition & Explanation

Right realism holds that the tendency toward criminal behavior is based on personality and biology. Political scientists who first proposed right realism adopted the theory that a person of low intelligence, low impulse control, as well as people who were risk-takers or showed aggressive behaviors were part of a subculture that was more inclined to adopt a criminal lifestyle. That is the essence of the criminal personality. Right realists believe these people were innately predisposed to commit crime.

One of the reasons right realists focus on the poor is their belief that welfare dependency produces a subculture of criminals. People make a conscious choice to commit crimes because they would rather be criminals and live on the benefits of welfare than seek employment.

Single-parent households, they suspect, especially those without a male role model or father figure, are most likely to produce criminals. In addition to a lack of moral values that right realists claim poor families share, it's asserted that poor families also resist mainstream social values, which actually encourages criminal behavior. This, the right realists conclude, is the reason for increasing criminal trends.

As a way to classify people who could be generally categorized as criminals and to target these people for enforcement, right realists created a subculture called the underclass. The underclass theory was proposed by Charles Murray, a political scientist, who defined people of the underclass as people who embraced criminal values and deviant behavior over social values.

Murray also concluded that people of the underclass were likely to pass on these characteristics to the next generation. Murray credited the rise of this class to welfare dependency.

Another argument promoted by right realists for stricter laws and harsher punishments is the assertion that criminals make a rational choice to commit crimes. Essentially, criminals calculate the consequences of the crime versus the reward of the crime.

For example, if Terry works out that to commit a crime he'll get $100,000, whereas the punishment is perhaps a month in jail and there is very little chance that he will be caught, Terry will pursue the crime because the risk is much less than the reward.

There are obvious issues concerning right realist theories and practices. For one, stricter laws and harsher punishments don't necessarily deter crime. The one thing they do promote is higher incarceration rates among the poor and minorities. There has been little shift in crime rates since the Reagan administration. Though violent crime was on a downward trajectory until the summer of 2020, which produced a spike in violent crime unseen in decades continuing into the 2020s, the number of people incarcerated has risen significantly.

Opponents of right realists have also argued that there is no evidence to the existence of an underclass that perpetuates the cycle of criminal values or activity. Issues relating to poverty and issues resulting from racism are key factors that are argued against right realism as well because many believe these are the primary correlations to criminal behavior.

All right, let's now take a moment or two to review. As we learned, right realism is a conservative political belief that harsher penalties on crime is the only way to curb criminal activity. It conjures the notion of a criminal personality, which essentially describes a person of low intelligence, low impulse control, as well as people who were risk-takers or showed aggressive behaviors who were part of a subculture that was more inclined to adopt a criminal lifestyle.

Right realists believe the cause of crime is essentially poor people who would rather live in a welfare state and commit crimes rather than seeking gainful employment. The underclass, a subculture of citizens predisposed to criminal activity, was defined by right realists as a way to focus enforcement and theorize on the cause of crime.

Since the Reagan administration, ''tough on crime'' statutes and laws have increased the number of Americans incarcerated; however, it hasn't seemed to curb crime the way right realists first proposed, with non-violent offenders being swept up in the increased arrests of all sorts of criminals.

What is Right Realism in Criminology?
Related Study Materials