Ana has a PhD in Biology. She has taught college classes at leading U.S. universities, also works as a Biology tutor. She has published several scientific journals.

View bio
Science is everywhere and it includes many different interesting and complex branches. Explore the definition, branches, and different topics of science, including physics, chemistry, biology, earth science, and astronomy. Updated: 10/16/2021
Create an account

Science is the study of the physical and natural world through observations and experiments. Science is all around us. Right now, the fact that you exist and are in the process of reading this lesson is science. The process of creating the air we breathe - also science. The food we enjoy, water we drink, and clothes we wear are all based in science. Looking up into the atmosphere gives us a glimpse into astronomy, another branch of science. You can't get around it. Science is everywhere and is one of the most important topics of study in our world. 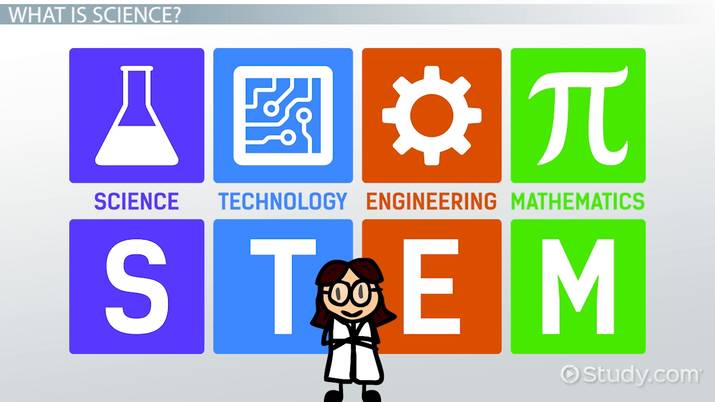 Coming up next: The Nature of Science

Science is organized from the most basic forces in nature to some of the largest, like the study of the earth and space. The study of physics focuses on laws and properties that govern behavior of all matter. Physics often involves things we can't see or touch, but can prove, like gravity. We can't see or touch gravity, but because of years of experiments, we know it's there.

Physicists also study energy, mechanics, motion, waves, electricity, nuclear reactions, and forces. People interested in physics use scientific laws and theories to build some of the things we see everyday, like bridges, cars, buildings, and power plants. If it's a structure or involves a motor, physics was surely considered when creating it.

Albert Einstein was one of the most famous physicists to date. He developed the theory of relativity, which is the basis for black holes and the potential for time travel, as well as how matter is converted to energy, which is used in nuclear power plants.

Chemistry is the study of chemical reactions and properties of matter. All the principles in chemistry are based on what we know about physics. As you can see, science topics build on each other, like a pyramid. Chemistry involves how atoms, the smallest particles of the world, bind together to create compounds. Although this might seem minor, chemistry is responsible for nearly any household product you use. Hair care products, cleaning products, even the packaged foods you eat, are all based in chemistry. For example, in the lab, scientists use chemical reactions to make compounds that smell like certain natural foods. One of the earliest discoveries was methyl anthranilate, a compound that smells like grapes and was one of the original ingredients in grape Kool-Aid.

Other chemists had a more significant impact on the world. Marie Curie was the first to discover two new radioactive elements and to use radiation to treat cancerous tumors. Her work revolutionized medicine. Unfortunately, she eventually died of radiation exposure. Before her death, she received a Nobel Prize in Chemistry, one of the most esteemed awards for scientists.

Biology is the study of life, and the principles and compounds in chemistry form the foundation for it. Biology spans from studying the most minuscule structures inside cells, called organelles, to giant masses of land with specific climates, called biomes. Biologists study cells, genetics, anatomy and physiology of the body, evolution, and ecology. Biology is perhaps the most relevant to human life, as many biologists focus on studying our bodies and the components inside them, like cells and DNA.

In fact, some of the earliest geneticists were interested in the basics of DNA. In 1953, James Watson and Francis Crick published their work on the structure of DNA inside cells, which launched the field of cellular genetics. Now, scientists working for the government and many independent companies are racing to find cures for cancer, treatments for diabetes and heart disease, and infectious diseases like HIV through studying cells and genetics.

Earth science is the study of natural processes that shape the earth, such as geology, oceanography, and meteorology. Earth scientists study the way tectonic plates, or large chunks of the earth's crust, move. Theses movements shaped the way we see the continents today, as well as cause earthquakes, mountain formations, and volcanic eruptions. Earth scientists also study things like weather, predicting weather patterns that cause anything from the occasional rain cloud to major crises, like tornadoes and tsunamis. Anytime you check the weather on your phone, you're taking a look into meteorology.

Edward Lorenz was a famous earth scientist that proposed the butterfly effect in meteorology. He supposed that small changes in weather in one part of the globe could drastically alter weather in a different part of the globe. Because of these chaotic changes in weather, it's now thought that weather can't be predicted accurately beyond a few weeks. So when you check your phone for the weather, you'll only be able to see a week or two in advance.

Astronomy is the study of celestial objects and the universe as whole, such as galaxies, stars, planets, and beyond. In early history, humans used basic observation skills to study space. The ancient Greeks were especially interested in the sky calculating impressive figures for their time, like the diameter of the sun. Today, scientists use patterns of light coming from stars to study the properties of the universe. Telescopes, satellites, space ships, and space stations are all used to gather information. The famous Hubble telescope was launched in 1990 and gathered an enormous amount of data on our universe, including stunning photographs of far away galaxies.

In summary, science is the study of the natural world through observations and experiments. There are five main branches of science:

Fun Science Experiment: How to Make a Density Tower:

No matter what type of science they study, one thing almost all scientists do is conduct experiments. Here's an experiment you can do to study density, which is the scientific term that describes how compact or dense is a substance. The density of liquids is a concept often used in several of the sciences described in the lesson, such as chemistry, physics, and biology. For example, the density in our body fluids, such as blood, has to remain constant to keep it functioning properly.

Materials you will need:

You will observe that each object will sink to different layers in the glass. For example, the bolt will sink to the bottom because it is denser than honey. The tomato will sink until it meets the milk.

The ping-pong ball will float on top of the oil since it is the less dense of these three objects.

Feel free to try any other small objects you have at hand!

Some of the liquids won't be able to mix with the others, the oil due to its properties will separate fully few minutes after you settle the glass down again.

Remember to have fun!

Create an account
What is Science? - Definition, Topics & Branches
Start today. Try it now
Intro to Astronomy: Help and Review

How Does a Hypothesis Become a Theory?

The Main Branches and Sub-Branches of Physical Science