Dr. Frazer has taught several college level Science courses and has a master's degree in Human Biology and a PhD in Library and Information Science.

Nathan has a bachelor's degree in biology from Duke University. He has experience as a peer tutor and has also taught online computer science classes.

View bio
Discover science, the processes and perspectives used to explore the universe, and its properties. Learn about making observations and using experiments to gather evidence. Updated: 12/27/2021
Create an account

Why do bears have fur coats? Because they would look silly wearing jackets!

This is just a silly joke, but think about bears for a minute. Why do they have fur coats? Why do they hibernate in the winter? People answer questions like these ones about how the world works using science.

The process of science starts with a question, but science is more than just being curious about how things happen; it's a system of observations and experiments used to ask and answer questions about the natural world. Science is a way for us to gain knowledge about how and why things happen the way they do by using our senses to observe the world and experiments to investigate how it works. 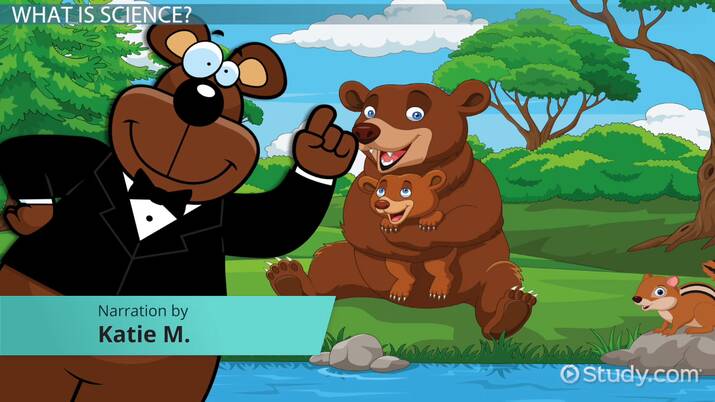 Coming up next: Aerodynamics Lesson for Kids: Definition & Facts

Scientists observe the world around them and ask questions like 'What is this?' or 'How does this work?' Observations are not only used to come up with questions, but also to describe how and why things happen the way they do. We know a lot about the universe now because of scientific observation, such as the fact that the sun is over 300,000 times heavier than the earth and some meteors can travel as fast as 44 miles per second.

How long does it take a sunflower to grow? You could answer this question the scientific way by planting a sunflower seed and observing how many days it takes the seed to grow into a flower. Your observations will give you new knowledge about sunflowers and how they grow.

Imagine that after your sunflower has grown, you notice that it gets taller after it rains. Why is that? Sometimes just observing the world cannot help you answer a question about how it works.

An experiment is an investigation a scientist performs to test if their explanation for how something works, called a hypothesis, is correct. After observing your sunflower growing faster after it rains, you might hypothesize that flowers need water to grow and survive. To test this hypothesis, you could set up an experiment. You could plant three sunflower seeds and water the first seed every day, the second seed every three days, and never water the third seed. By observing and recording how these three flowers grow, you will get information about how water impacts plant growth.

The information scientists get from observations and experiments is called evidence. Evidence is collected so scientists can determine if their explanations for why things happen are right or wrong.

Okay, let's review what we've learned about science. Science is a system of observations and experiments used to gain knowledge about how the universe works. Observations describe how and why things happen the way they do. Experiments are investigations used to explain how the world works. We also learned that the information scientists collect from observations and experiments to prove their hypothesis is called evidence, with a hypothesis being an explanation for how something works. Now you should be aware of how science works, so you should be able to start experimenting as soon as possible!

Think of a question you have about how the world works. How would you use science to answer this question? If possible, design and conduct an experiment to answer your question, and share your results with a friend or family member.

Draw a diagram depicting the cyclic process, known as the scientific method, that is used in science to answer questions. Include the steps: ask a question, make a hypothesis, conduct an experiment, collect and analyze data, draw a conclusion, and share results in your flow chart.

Questions and responses to this activity will vary but should involve using the scientific method to answer a question.

Here is a sample diagram:

Create an account
What is Science? - Lesson for Kids
Start today. Try it now
Earth Science for Kids

What is Science? - Lesson for Kids
Related Study Materials

What Does a Scientist Do? - Lesson for Kids

What Is Chemistry? - Lesson for Kids

Sense of Hearing Lesson for Kids

Types of Plants: Lesson for Kids

The Five Senses: Lesson for Kids

Density of Liquids Lesson for Kids