What Is Short-Term Memory?

If someone told you his or her phone number, would you have much trouble remembering it 25 seconds later if asked to repeat it, even if you never dialed it? Probably not, right? So, how does this happen? The answer is short-term memory.

Short-term memory is the focus of this lesson, but understanding how it fits into the broader concept of memory will help you better understand its specific role. In general, it's widely agreed that there are three main categories or types of memory: sensory memory, short-term memory, and long-term memory.

Many people conceptualize working memory as a mental workbench. This is a pretty accurate analogy; information is brought in to short-term memory and must be prioritized and attended to. It's either put to use within a few seconds, ignored altogether, or encoded and sent to long-term memory. Long-term memory allows us to hold on to and use information for days, months, or years, which is much different from short-term memory, which is intended to allow for the quick use of received information. 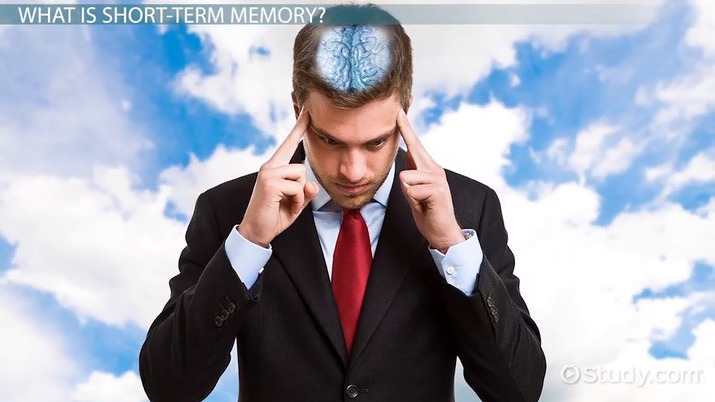 Coming up next: What is Speech Impairment? - Definition, Causes & Characteristics

Since the information sent to short-term memory is only available for around 30 seconds unless something is done with it, attention plays a key role in maximizing short-term memory, as well as in memory problems. Impaired attention can be the result of brain damage. Common brain diseases, like Alzheimer's disease or dementia, by their nature can cause serious cognitive impairments, one of which is impaired attention capacity. Additionally, sometimes things like sleep deprivation, poor physical health, or psychoactive drugs can interfere with our ability to attend to new information and reduce our ability to recall information within a few seconds of being exposed to it.

If you remember the mental workbench analogy, then you can understand how it's difficult for short-term memory to make use of the information received if a lack of attention is reducing the brain's ability to recognize and focus on the information coming in. For instance, if someone is telling you his or her phone number, but due to problems associated with attention you don't even realize that he or she is speaking to you, it'll be hard to make use of that information. If attention is impaired, then the phone number is never even recognized by the listener.

Short-term memory problems can also occur in healthy and normally functioning brains. Once again, however, attention plays a big role. A lot of information comes in from our senses at all times, which puts our short-term and working memory in a position where choices must be made about what to focus on. We simply can't focus and attend to everything, so choices have to be made about what's most important.

Even when we do decide that something is worthy of our attention and we aren't being influenced by things like brain damage, lack of sleep, or drugs, our short-term memory does have its limitations. For example, when it comes to numbers, the average person can remember anywhere from five to nine digits a few seconds after hearing or seeing them. However, we all know that it's possible to recall more than nine digits a few seconds after hearing them. So, how does it happen?

Well, short-term memory can be enhanced by employing a couple of memory-enhancing strategies: chunking and rehearsal. Chunking involves breaking long strings of information down into smaller chunks. For example, reducing a 10-digit string of the numbers like 2693620853 down to 269, 362, and 0853. Shorter chunks are easier to remember! Rehearsal is the act of actively repeating, or rehearsing, the information over and over again in an effort to keep it in short-term memory longer.

Create an account
What Is Short-Term Memory: Definition & Causes for Memory Loss
Start today. Try it now
Intro to Psychology: Help and Review

George Miller Psychology Theories | What Is the Capacity of Short-Term Memory?

Memory Stages, Types & Storage | What is Memory in Psychology?