Tom has taught math / science at secondary & post-secondary, and a K-12 school administrator. He has a B.S. in Biology and a PhD in Curriculum & Instruction.

View bio
Streptococcus pyogenes is a gram-positive bacterium found on the skin and in the mucous membranes of its host. Discover the symptoms and illnesses caused by this bacterium, including secondary infections, and how to treat them. Updated: 11/01/2021
Create an account

Pathogen for Many Illnesses

Bacteria: they live in our intestines, on our skin, in the soil, and in our food. In fact, without bacteria, we would not be able to live. There are a huge number of bacteria with whom we have formed a cooperative relationship, even the ones that make us sick in larger quantities. So why is it that bacteria seem to have such a bad reputation? Look no further than the bacterium Streptococcus pyogenes. This little bug is responsible for hundreds of millions of illnesses in the world each year. These include some of the most familiar illnesses and some of the most sensationalized illnesses we see in the media. Its effects can range from mildly annoying to lethal. 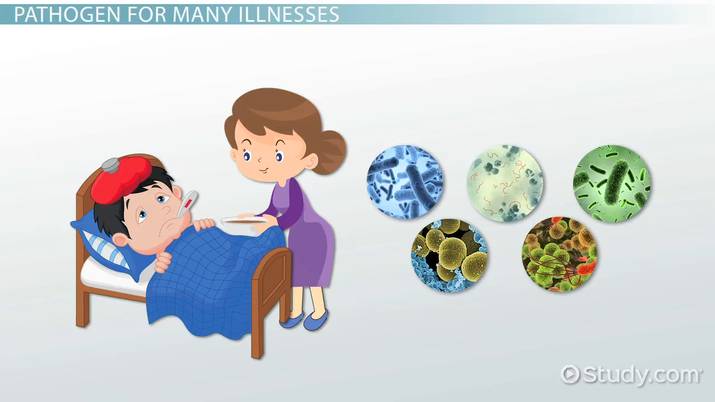 Coming up next: What Is a Staph Infection? - Causes, Symptoms & Treatments

Before getting into some of the specific illnesses this bug can cause, it is helpful to learn more about the bacterium itself. Streptococcus pyogenes (S. pyogenes) is a gram-positive bacterium, known as a Group A Streptococcus, or GAS. It can be found primarily on the skin and in the mucous membranes of its host. It is estimated between 15 and 20 percent of people in the United States are carrying and shedding the bacterium at any given time, even though most of these carriers are asymptomatic.

The bacterium is spread easily through the types of interactions that occur when people are living and working closely with one another. Because the bacterium exists on people's skin and in their mucus, it can be spread through hand-to-hand contact; surfaces, like tabletops and drinking fountains; or through the tried-and-true sneezing and coughing. One of the best ways to avoid the spread of this nasty bug is basic hand washing and hygiene techniques.

The bug itself is not particularly hardy, as are some other pathogenic bacteria. It can be killed easily. However, it is a veritable poison factory, and once it settles on a host and finds the right conditions, one of about a dozen or more toxins can wreak havoc in just about any part of the body. These toxins do not only influence many parts of the body, they can also do so in many different ways, ranging from mildly irritating to deadly. The bacterium produces a coating that helps it avoid the body's natural defense of phagocytosis, or the body's defense cells surrounding and eating the bacterium.

Before the widespread use of antibiotics, S. pyogenes infections were often lethal. However, the best news about 'Strep' is that it has and continues to remain highly susceptible to penicillin and has demonstrated a rather limited capacity to develop resistance to antibiotics, especially in comparison to some other so-called 'super bugs.' Now strep infections are not often fatal in developed countries where antibiotics are readily available.

Now for the fun stuff. The diseases caught by this bacterium are varied in both severity and presentation of symptoms. For ease, we'll start with the more benign types of the illness and move progressively towards the more serious illnesses caused by S. pyogenes.

Colonization by S. pyogenes on the skin can cause mild infections that don't even always need to be treated by antibiotics. S. pyogenes can also cause impetigo, characterized by a spate of lesions, often on the neck, face, and upper body, that are purulent and eventually crust over in a brown/yellow scab-like manner. Impetigo generally requires antibiotic topical treatment or systemic antibiotics.

Most people have heard of strep throat, and many have also had it. When S. pyogenes colonizes the throat, it typically induces fever, very sore throat (pharyngitis), swollen lymph nodes, and inflamed tonsils.

Otitis media is a painful ear infection resulting from the colonization by S. pyogenes in the Eustachian tubes. The route of infection can either be directly through the sinuses or following a throat infection.

When S. pyogenes colonizes the subcutaneous level of the skin (the layers below the skin surface, but right above the muscle, bone, or cartilage), necrotizing fasciitis can occur. This is reported in the media as 'flesh-eating' bacteria, and it can spread rapidly, eating through skin sub-surface layers quickly. Often, surgical removal of the infected area is necessary. These infections are also more likely than strep throat or minor skin irritations to develop into even more serious infections. Necrotizing fasciitis is often fatal if untreated, or if diagnosed too late. While S. pyogenes is not the only 'flesh-eating' bacterium, it is one of the most common ones.

Bacterial sepsis occurs when an infection of S. pyogenes gets into and overwhelms the blood supply. This incredibly serious condition can escalate rapidly. Even when diagnosed relatively early, this type of infection is often fatal.

Doctors always tell us to make sure we finish the course of antibiotics, even after the symptoms have gone away. Why? Symptoms will abate as numbers of the bacteria and the amount of their troublesome toxins decrease, but there will still be plenty of bacteria. Stopping antibiotics too soon can allow the S. pyogenes infection to regain strength, resulting in secondary infections.

Strep throat can be followed by scarlet fever, especially when antibiotics treatment is ended as symptoms abate, but before the bacteria have been removed from the body. Scarlet fever is typically not any more serious than strep throat and has many similar symptoms. It also is accompanied by a rash on the skin with a dark red color that gives the illness its name.

Rheumatic heart disease is another illness, one that is more serious than scarlet fever. Unlike scarlet fever, it appears to only occur after an upper respiratory tract infection, like strep throat. These individuals acquire rheumatic fever, which results in heart valves that are compromised, leaky, and broken down. Rheumatic heart can lead to severe conditions, including long-term heart conditions and eventually death. People in undeveloped countries by far account for most cases, with an estimated 15 million people suffering from the condition. It is estimated that over 200,000 deaths occur each year, mostly in developing countries, as a result of rheumatic heart. Once acquired, rheumatic heart can be difficult or impossible to completely eliminate.

Glomerulonephritis is an inflammation of the glomeruli, an important part of the kidney. When S. pyogenes colonizes the kidney, kidney function is compromised, and can result in red or foamy urine, high-blood pressure, fatigue or anemia, and swelling throughout the body from retention of fluids that the kidneys couldn't process. Fortunately, this is an easy secondary infection from which to recover, if treated properly.

As mentioned earlier, one of the great things about this bacterium is that it remains susceptible to penicillin and related antibiotics, and it has not yet, like so many other bacteria, developed widespread antibiotic resistance. The treatments for most S. pyogenes infections involve antibiotics of varied strength and duration of treatment, depending on the type of illness involved. Beyond antibiotics, treatments may involve addressing secondary conditions, such as painkillers for strep throat, antibacterial salves for skin conditions, and surgical removal of infected areas of skin in necrotizing fasciitis.

S. pyogenes is one of the more common bacterial pathogens throughout the world. The varied arsenal of toxins it produces results in many different types of illnesses. While it is responsible for many different kinds of illnesses, such as strep throat and flesh-eating bacterial disease, the good news is that it remains highly susceptible to penicillin and related antibiotics, having not yet developed widespread antibiotic resistance. S. pyogenes-induced illnesses can range from mildly annoying to fatal. The degrees to which S. pyogenes illnesses are fatal has decreased tremendously with the advent of antibiotics use. However, fatalities persist in undeveloped parts of the world. Secondary infections, like rheumatic heart and scarlet fever, occur often when treatment of the initial infection is incomplete or ineffective.

After you've completed the lesson, take stock of your ability to:

In this activity, students will be writing three short stories, called a vignette, about different patients with Streptococcus pyogenes infections. This bacteria causes a wide range of infections that can show up in different ways in humans, and thus students should have a wide variety of material to choose from for their vignettes. For example, students could write about a young boy with strep throat or a patient in the hospital that develops an infection of S. pyogenes in their skin after being exposed to contaminated surfaces.

In this activity, you will be writing three short stories called vignettes about different patients that have a Streptococcus pyogenes infection. In each story, you should explain what the symptoms of the infection are, how the patient seeks treatment, and what the doctor recommends. You should use three different types of infections caused by the bacteria as described in the lesson. To make sure your stories are the correct length, and have the required information, review the criteria for success below.