Suicide is a common and often preventable tragedy where one takes their own life. See examples of reasons and triggers and methods of prevention through therapy, medication, substance use treatment, and family therapy. Updated: 05/19/2022
Create an account

The following lesson defines suicide. If you or a loved one are considering suicide or struggling with mental health conditions, know that there is help. For resources and help, please visit https://suicidepreventionlifeline.org/ or https://www.crisistextline.org/

Warren is in a dangerous situation. He's been living with depression for a while, but recently things have gotten worse. He's lost his job, and his family is at risk of losing their home to foreclosure. He thinks that his family might be better off if he's dead, and they can collect the insurance money. More and more, he thinks about this.

Suicide is the act of taking one's own life. In 2010, suicide was the 10th leading cause of death for Americans, with over 38,000 reported suicides. Many of the people who die by suicide live with a mood disorder or other mental health condition. Let's look closer at the reasons, triggers, and prevention of suicide. 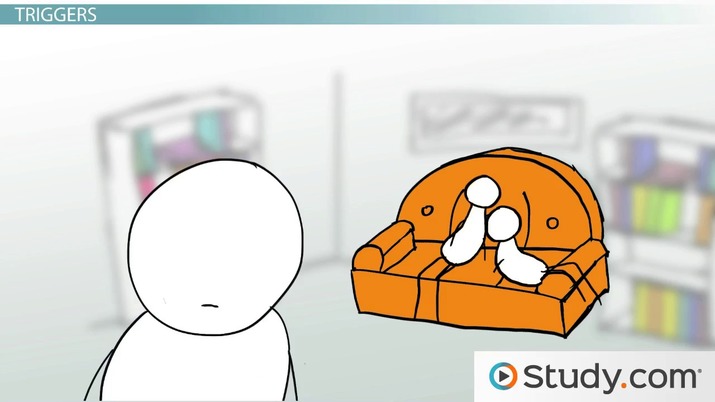 Try it now
Back
Coming up next: Stress Disorders: Definition and Perspectives

There are many reasons that people die by suicide. Five common reasons include:

There are many reasons that may influence a person to complete suicide. There are also many risk factors, or triggers, that can lead to suicide.

Warren is also feeling hopeless. He's lost his job, and his home is about to be foreclosed. He doesn't know how he'll pay the bills or provide for his family. Hopelessness is another trigger for suicide. Warren doesn't really talk to his wife about his depression or his thoughts of suicide. He feels like it's unmanly and that he needs to hide it. He's isolating himself, and isolation, too, is a risk factor. People who have few friends or aren't able to talk to their friends or loved ones are at a higher risk for suicide.

A stressful life event, like the fact that Warren has lost his job or the fact that he might lose his home, is another trigger for suicide. Other triggers include unhealthy substance use, a family history of mental illness or suicide, and previous suicide attempts.

Warren is at a serious moment in his life. Thoughts of suicide are not to be taken lightly. But what can he do? What can his wife and other loved ones do to help prevent Warren from taking his own life?

There are four main channels for suicide prevention:

Talking with someone is a cornerstone of suicide prevention. Whether Warren talks one-on-one with a psychologist, attends a group therapy session led by a mental health professional, or talks on the phone with a trained volunteer counselor at a prevention hotline, talking through the issues he is having is an important first step in prevention.

Many people living with depression and other mental health conditions have biological issues. Depression like Warren's, for example, could be partly caused by a chemical imbalance in his brain. Taking medication to correct this chemical imbalance could help Warren begin to feel better and leave thoughts of suicide behind.

Though Warren does not have a substance abuse disorder, this is a major trigger for some people. Getting treatment for unhealthy substance use can help some people avoid thoughts of suicide or attempting suicide.

Warren's wife is an important part of his life, and she too might need therapy. Her therapy can focus on her own reactions to Warren's depression, as well as helping her develop skills to support Warren through his darkest hours.

Suicide is the act of taking your own life. There are five main reasons that people take their own life, including depression, mental health conditions that lead to psychosis, mental health conditions that lead to impulsive thoughts, feeling like there is no other option, and terminal illness. Triggers, or risk factors, for suicide include depression, hopelessness, isolation, stressful life events, substance use disorders, a family history of suicide, and previous suicide attempts. Prevention focuses on treatment of thoughts of suicide and is approached through therapy, medication, addiction treatment, and family therapy.