Lesson Transcript
Instructor: John Williams
Sweat is a fluid excreted by the body to help maintain normal body temperature. Learn about homeostasis, the definition and function of sweat, how sweat cools the body, and the disorder associated when the body does not produce sweat. Updated: 10/03/2021
Create an account 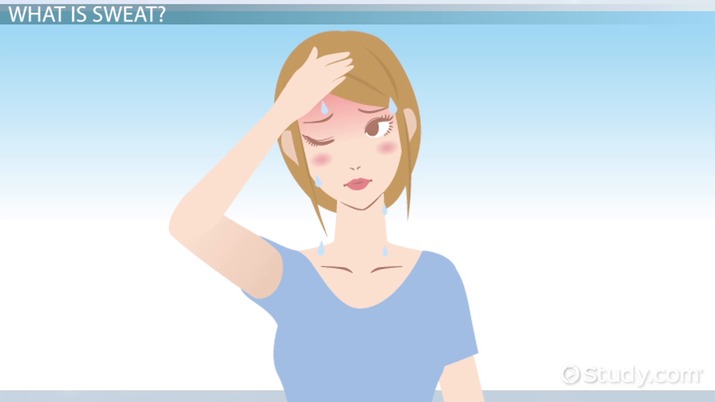 You're likely familiar with what sweat looks and feels like. But do you know of what, exactly, it's composed? Sweat is a fluid that's released from the body's skin. When the body gets too hot, the nervous system will stimulate the glands of the skin to start producing this fluid, which is used to cool the body and bring its temperature down. Sweat is composed of several components:

Incidentally, these same components are found in urine, which is produced by the kidneys. Yes, urine and sweat essentially contain the same chemicals, but in different concentrations. Therefore, both of these organs are responsible for waste homeostasis.

How Does Sweat Cool the Body?

Think about the times that you can remember sweating. I would guess that the most obvious times were those where the temperature around you was high or when you were performing some type of exercise or activity.

Sweat cools the body as it evaporates from the skin. Evaporation is the process of a liquid turning into a gas. During evaporation, the surface of the skin will typically become cooler as the sweat leaves. By doing this, the body can assist in cooling off and maintaining the normal body temperature. Typically, when we sweat, the body will continue this process until A) the temperature around us is lowered or B) the physical activity has stopped.

What if You Don't Sweat?

Since sweat is a very important factor in homeostasis, a lack of sweat can be dangerous to your health. Individuals who do not produce sweat experience a condition known as anhidrosis. Anhidrosis can be caused by diseases, such as Horner's syndrome, or overexertion in exercise. As a result, the body loses the ability to cool off, and this can damage other organ systems as they try to function at a higher temperature.

Typically, individuals who are suffering from anhidrosis due to overexertion must replenish their body fluids with exercise drinks or water, or they risk permanent damage and possibly death. Individuals with disease-based anhidrosis typically require medical assistance.

Sweat is a fluid produced by the skin in order to cool the body. As sweat evaporates, it leaves the surface of the skin cooler in order to bring down body temperature. Sweat contains water, salts, and urea, and is part of the excretory function of the skin. Without sweat, the body can experience damage to its organs and even death.

What is an Embryo? - Lesson for Kids

Excretion: Process & Examples | What is Excretion?