View bio
Tachypnea is a breathing condition caused by an imbalance of carbon dioxide and oxygen. Explore this condition by learning its definition, common causes, symptoms, and methods for treatment. Updated: 10/14/2021
Create an account

When this happens, the blood becomes more acidic than usual, and this alerts the brain that something is wrong. In response, the brain signals the respiratory system to pick up the pace to try to fix the imbalance and stabilize the blood's pH back within its normal range. The normal breathing rate for a healthy resting adult is in the range of 8-16 breaths per minute. Anything higher than this is considered tachypnea.

Newborn infants can experience a form of tachypnea called transient tachypnea. This occurs when there is residual fluid in the lungs, causing fast and shallow breathing. The condition usually goes away on its own within the first 24 hours, and infants are closely monitored during this time. 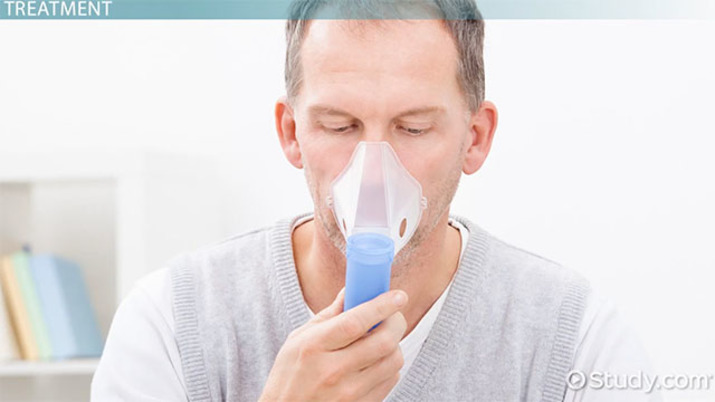 Try it now
Back
Coming up next: What Is Thoracentesis? - Definition, Procedure & Complications

Tachypnea can be caused by a number of conditions. Chronic conditions like asthma, lung disease, anxiety, or obesity can lead to tachypnea. It may also be caused by acute conditions like pulmonary embolism (blood clots in lungs), choking, heart failure, shock, or heatstroke. Lung infections can also cause tachypnea. Some common ones you'll probably recognize are bronchiolitis or pneumonia.

Obviously, the most pronounced symptom is breathing that is fast and shallow. When the lungs have too much carbon dioxide, it creates a feeling like you can't get enough air. Other symptoms may include a bluish-gray tint of the skin, nails, lips, or gums, lightheadedness, chest pain, fever, a chest that caves in with each breath, or breathing that gets worse over time.

Treating tachypnea requires identifying and treating the underlying cause. For example, if asthma or a lung infection is to blame, an inhaler may be used to open the airways. If a panic attack due to anxiety is the culprit, medication might be used.

In other cases, medications like beta-blockers might be used. These work by counteracting adrenaline, which is released in the Fight or Flight response the body has to stress or fear. Maintaining ample oxygen in the body is critical, so oxygen might be administered from a tank or machine until symptoms subside and the body returns to normal. Chronic diseases affecting the lungs have various treatment options as well that can help lessen symptoms.

Let's review. Tachypnea is a breathing condition where the breathing is fast and shallow due to an accumulation of carbon dioxide in the body. This can be caused by a number of conditions or diseases, ranging from chronic conditions, like asthma, to acute infections, like pneumonia.

In addition to irregular breathing, symptoms can include a bluish tint to the skin, nails, lips, or gums, as well as chest pains, fever, or lightheadedness. Treating tachypnea requires treating the underlying condition, and this may be done with medications, inhalers, oxygen, or whatever treatment is appropriate.

Writing Prompts on Definition, Causes, and Treatment of Tachypnea

David, a 30-year old mechanic, was rushed to the emergency room of a hospital. There, he complained of intense chest pain with rapid and shallow breathing. David's condition was also accompanied by abnormal fluid retention (anasarca), causing his abdomen to swell. His medical record indicated that he only had a background of mild asthma and rarely required his inhaler. Moreover, a mental examination showed that he has signs of anxiety and depression induced by financial problems and overfatigue.

A newborn baby was admitted to the hospital for prematurity and feeding difficulty. He was born at 34 weeks gestation via C-section delivery. After admission, he demonstrated slightly diminished breath sound and grunting. His breathing rate was about 70-80 breaths per minute, and his skin had a bluish-grey tint. Fortunately, his chest radiograph showed no abnormalities, and his breathing stabilized within 24-hours.

What Is Erythema? - Definition, Symptoms & Causes

SBAR in Nursing Communication Format & Examples | What is SBAR?

What Is Erythema? - Definition, Symptoms & Causes

SBAR in Nursing Communication Format & Examples | What is SBAR?