Grace attended James Madison University has a bachelor's degree in history and a master's degree in teaching. She previously taught high school social studies in several states around the country.

View bio
In this lesson, you'll explore the history of the 5th Amendment to the United States Constitution. You'll also learn about the double jeopardy clause, due process clause, and the right to remain silent. Updated: 07/15/2020
Create an account

Definition of the 5th Amendment

'No person shall be held to answer for a capital, or otherwise infamous crime, unless on a presentment or indictment of a Grand Jury, except in cases arising in the land or naval forces, or in the Militia, when in actual service in time of War or public danger; nor shall any person be subject for the same offense to be twice put in jeopardy of life or limb; nor shall be compelled in any criminal case to be a witness against himself, nor be deprived of life, liberty, or property, without due process of law; nor shall private property be taken for public use, without just compensation.'

Can you imagine being tortured into a confession by the police? Or what about being held for a crime without being tried? Or having your house taken away by the government without getting paid for it? Fortunately, if you live in the United States, you won't have to worry about these questions. This is because of the 5th Amendment.

From here, we'll examine the specific clauses of the 5th Amendment, so you can more fully understand the implications behind these words. 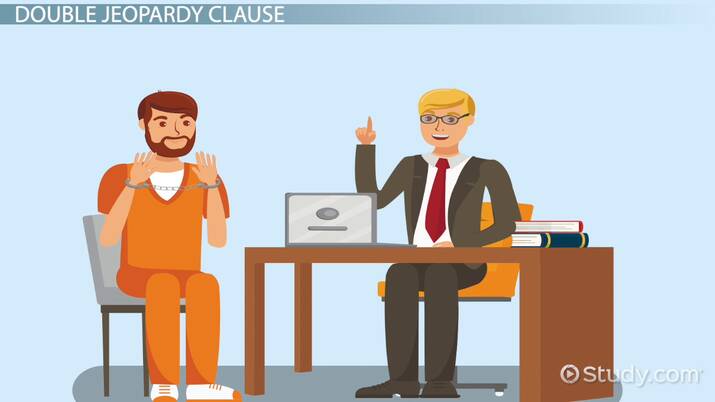 Imagine you've been put on trial in criminal court for six grueling weeks for a crime you didn't commit. Finally, the verdict comes in from the jury, and you are found to be innocent! But as you celebrate, the furious prosecutor serves you with another warrant and notifies you that you will be tried again by a different jury for the same crime. Doesn't sound fair, does it?

The double jeopardy clause of the 5th Amendment protects that from happening, saying ''nor shall any person be subject for the same offense to be twice put in jeopardy of life or limb.'' Originally, the double jeopardy clause only applied to federal crimes, but the federal government has ruled that it applies to state and local governments as well because of the 14th amendment.

The framers of the Constitution included this clause in amendment five because of the many infractions that occurred in England under the English throne. For one, the royal crown would sometimes order the retrial of an acquitted person if the crown didn't like that person. With this in mind, James Madison included the double jeopardy clause in the Constitution to avoid such an injustice.

Pleading the Fifth & Due Process

In the 17th century, a Puritan named John Lilburne was put on trial. At the time, Puritans were discriminated against in England, and Lilburne was protesting their treatment. Lilburne was accused of trying to smuggle in Puritan pamphlets. The English Court wanted him to take an oath, swearing he would tell the truth. Lilburne, a Puritan who considered lying a sin, refused to take the oath because he would just incriminate himself. As a result, Lilburne was brutally whipped. Although Parliament later declared his punishment illegal, the call came to preserve a person's right against self-incrimination.

This historical background was what the framers of the Constitution were working with. You've probably heard of someone ''pleading the fifth.'' This is the right to remain silent, which allows a person being questioned to remain silent so as to not incriminate themselves. So, it's no wonder that the framers felt it important to include in the 5th Amendment.

If you have ever gotten a traffic ticket, you know that you will receive a bunch of notices from the court. Why do you get so many notices? Because according to the due process clause of the 5th Amendment, all people affected by a legal proceeding must be warned and be given adequate time to prepare for the trial. This is called procedural due process. Therefore, one trick to delay a legal proceeding is to ask a judge for more time to prepare a defense. But don't irk the judge too much, since there is a limitation on how long you can delay the trial. The due process clause also demands that the judge be impartial. If the judge is familiar with any party involved in the proceeding, they are required to recuse themselves.

What if the government wants to build a highway, but your house is in the way? According to the Constitution, the government can actually take away your house, but only if it compensates you for your loss. The process in which the government seizes private property for public purposes is called eminent domain.

At the time of the writing of the Constitution, several disputes were arising among different states. For example, residents who lived in Vermont but who also owned land in New York were not having their title claims honored. Instead, the State of New York was simply seizing their land without compensation. In other states, the state government was seizing the land of those with questionable patriotism. The framers foresaw this abuse of power and decided to force the government to compensate citizens for any time the government exerts eminent domain.

Eminent domain, above all, reflects the difficult balance that the framers were trying to keep. While they recognized the need for public goods and property, they also wanted to recognize the rights of individuals.

You can't be held by the police for more than 36 hours if you are not charged with a crime. For serious offenses, you are charged through the process called an indictment. Here, between 12 to 23 people listen to the prosecutor accuse you of a crime, listing all the facts against you, including hearsay. During this time, an individual is not allowed to cross-examine or defend themselves (that comes later at the trial). If the Grand Jury finds probable cause, then the case can proceed to trial.

The one group, according to the 5th Amendment, that's exempt from the regular judicial process is servicemen in the armed forces. According to the Constitution, military service members are tried under a military court where they do not have the same rights to trial by jury. Military courts, however, are similar to civilian courts in their procedures.

The 5th Amendment to the Constitution provides some of the most important fundamental rights that an individual has in legal matters.

To quote it, 'No person shall be held to answer for a capital, or otherwise infamous crime, unless on a presentment or indictment of a Grand Jury, except in cases arising in the land or naval forces, or in the Militia, when in actual service in time of War or public danger; nor shall any person be subject for the same offense to be twice put in jeopardy of life or limb; nor shall be compelled in any criminal case to be a witness against himself, nor be deprived of life, liberty, or property, without due process of law; nor shall private property be taken for public use, without just compensation.'

There are several clauses to the 5th Amendment, they include the double jeopardy clause, which states that a person cannot be held for a second trial of the same crime if found innocent. They also include the right to remain silent, which allows a person being questioned to remain silent so as not to incriminate themselves.

The due process clause, which requires that all people affected by a legal proceeding must be warned and be given adequate time to prepare for the trial. The 5th Amendment also contains the clause about eminent domain, which is a process in which the government seizes private property for public purposes. A right to a grand jury, in which a person is given an indictment, which is basically a system of checks and balances to determine the severity of a citizen's crime. And finally a clause about military tribunals, which are a different legal process altogether for men and women in the armed services.

Breaking Down the 5th Amendment

The Fifth Amendment to the U.S. Constitution is long and holds much more than the simple association of ''I Plead the Fifth.'' After reviewing the lesson, use this activity to help students think critically about the key components of the Fifth Amendment and create a way to remember each of its parts.

Begin by giving each student a piece of paper. In the center of their paper, they should write the words ''5th Amendment'' and place a circle around the text. Then they will be creating a web graphic organizer that contains each of the five main provisions of the amendment. Off of the main circle, they should draw five lines that connect to five circles.

Inside each of the outer circles, students will place one part of the 5th Amendment. Inside the respective circles (or next to them if there is no room), they should also create an illustration that will help them remember that part of the amendment.

The five main provisions of the amendment are: double jeopardy clause, the right to remain silent, right to a grand jury, due process clause and eminent domain.

Off of the web, students can illustrate and write out a short note about how the amendment is different for people in the military.

What Is Due Process in Crime Control? - Definition & Guarantees

What is Probable Cause? - Definition & Examples