View bio
The 6th Amendment to the U.S. Constitution guarantees the rights of individuals charged with a crime. Explore the definition and summary of the 6th Amendment, and review court cases to learn more. Recognize some of the rights guaranteed by the 6th Amendment, including a speedy and public trial, impartial jury, information about indictments, right to an attorney, and Miranda rights. Updated: 10/15/2021
Create an account

Definition of the 6th Amendment

Imagine getting arrested for a crime you didn't commit. You are held indefinitely in prison without a trial because the prosecutor keeps delaying things in court. The trial is also being conducted secretly and behind closed doors. You don't know why you are being accused, and the witnesses testifying against you are all anonymous. You can't call your own witnesses, and you can't have a lawyer help you during all this. Does that sound fair?

Well, thanks to the 6th Amendment of the Constitution, you don't have to worry about these problems. The 6th Amendment, a part of the original Bill of Rights, grants individuals certain rights in the event of an arrest.

In all criminal prosecutions, the accused shall enjoy the right to a speedy and public trial, by an impartial jury of the State and district wherein the crime shall have been committed, which district shall have been previously ascertained by law, and to be informed of the nature and cause of the accusation; to be confronted with the witnesses against him; to have compulsory process for obtaining witnesses in his favor, and to have the Assistance of Counsel for his defence.

In this lesson, we'll break down the various clauses and note how the Supreme Court has interpreted the clauses in different court cases. 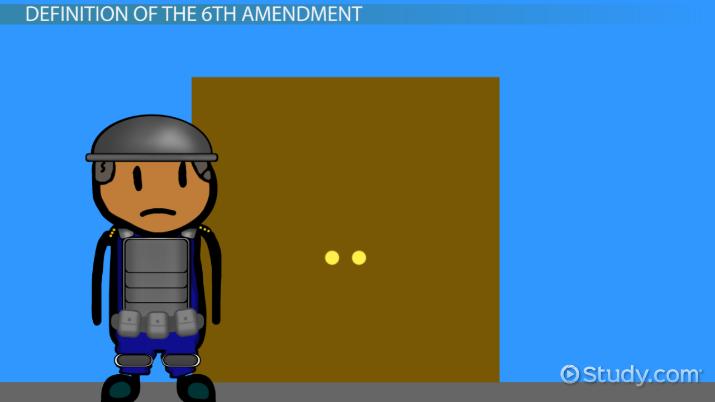 Coming up next: What is the 8th Amendment? - Definition, Summary & Cases

Because of the 6th Amendment, you have a right to a speedy and public trial. In Barker v. Wingo (1972), the Court ruled that a conviction can be overturned if the delay between arrest and trial is incredibly long. Although the time a prosecution can take to try an accused person varies by state, the general rule of thumb is that more than a year tends to be prejudicial against an accused. Also, if a court finds that a delay is due to the prosecution and not the defense, or that a delay negatively hurts the defendant's chances in any way, the defendant can have his or her conviction overturned. Very few convictions get overturned on this clause, however, because most of the time, the defendants ask for more time and not the prosecution.

Now let's talk about the public aspect to trials. The Court ruled in Sheppard v. Maxwell (1966) that a defendant's trial can become closed to the public if a defendant proves that a public trial would hurt his or her chances, or if a prosecutor can show that making the trial public would damage 'higher values' of a society. In all other cases, however, most trials have to be open to the public.

According to the 6th Amendment, you have a right to be tried by an impartial jury. This only applies, however, to serious offenses that may result in jail time longer than six months. Minor offenses are usually tried before a judge.

To prevent juries from being biased for or against a defendant, the 6th Amendment requires that both the prosecution and defendant may question potential jurors in what is called a voir dire. If either the defendant or the prosecutor believe that a juror will be biased, he or she may challenge that juror's validity to a judge. Another way in which the 6th Amendment protects your rights from a biased jury is to ensure that jurors are selected from a representative sample of the population. In other words, how jurors are picked must be random and not systematically exclude a group of people. Think, for example, if it would be fair if all women were not allowed to be on the jury. According to the 6th Amendment, this could be grounds for throwing out your conviction.

Indictments, Right to an Attorney, and Miranda Rights

According to the 6th Amendment, you have a right to be informed of what crimes are being charged against you before the trial starts. This process is known as an indictment, in which the prosecution has to present all its information demonstrating why it is accusing you of the crime. The indictment has to be clear and specific. The prosecutor cannot be vague about what crime he or she is accusing you of.

In 1963, Ernesto Miranda was arrested for the rape and kidnapping of an 18-year-old girl. Miranda confessed under police interrogation but was never informed of his right to an attorney or to remain silent. The Supreme Court overturned his conviction in Miranda v. Arizona (1966) because Miranda was not told explicitly his rights under the 5th and 6th Amendments of the Constitution. As a result, today police officers must inform an arrested individual of all rights afforded to him or her in the Constitution; this set of rights is known as a person's Miranda rights.

In all criminal prosecutions, the accused shall enjoy the right to a speedy and public trial, by an impartial jury of the State and district wherein the crime shall have been committed, which district shall have been previously ascertained by law, and to be informed of the nature and cause of the accusation; to be confronted with the witnesses against him; to have compulsory process for obtaining witnesses in his favor, and to have the Assistance of Counsel for his defence.

Prompts About the 6th Amendment:

In your own words, explain what the 6th Amendment guarantees. In other words, put the language of the amendment into layman's terms.

Example: The defendant has to be told specifically what his charges are.

Create a poster, chart, or other type of graphic organizer that lists and briefly describes the Supreme Court cases and their rulings discussed in the lesson. Briefly state how they apply to the 6th Amendment.

Example: The Supreme Court cases Powell v. Alabama and Johnson v. Zerbst ruled that everyone has the right to an attorney.

In an essay of a paragraph or two, define and describe voir dire. Explain how the 6th Amendment attempts to make jury selection fairer.

Example: You could note that selected jurors are meant to broadly represent the population.

Write an essay of two or three paragraphs that explains how the 6th Amendment impacts the way trials are conducted.

Example: You could explain that in most cases, trials are open to the public.

In at least three to four paragraphs, write an essay that describes the types of conditions that could cause a conviction to be overturned per the 6th Amendment.

Example: If the prosecutor took too long to bring the defendant to trial, the conviction can be overturned.