A song contains a section called the bridge and this section adds a different key and pattern in between the sections of a song. Learn about the definition of a song bridge, its location in a song, and examine its musical structure. Updated: 12/29/2021
Create an account

The Bridge of a Song

Imagine that you're hiking. You're walking along a path going through the woods when you come to a river. To get to the end of the trail, you have to cross the river, and oh look, there's a nice, handy bridge to help you get there. That's what bridges do. They help you cross something different and get to where you're going. This is true while heading over the river and through the woods, and it's true in songs. In American popular music, the bridge is a distinct section of the music used to help reach the resolution. It'll get you where you're going, and just might add a little adventure along the way. 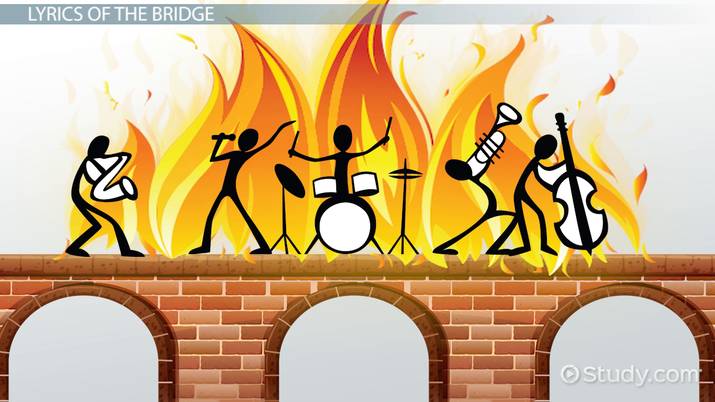 Try it now
Back
Coming up next: What is an Alla Breve?

Location of the Bridge

So, where can we expect to find a bridge in popular songs? As with most musical traditions of the world, American popular songs tend to share a basic structure. This helps us understand the music, remember it, and know where to find the important information. In American music, there are two main song structures we see a lot. The thirty-two bar form is a structure composed of 4 sections that are 8 bars each. The first, second, and fourth section are identical in structure and chord progression. The third section is different, adding a unique twist in the song. We can represent the structure as AABA. In this structure, the bridge is easy to find. It's the B.

A simpler song structure common in Western popular music is the verse-chorus model. This is a similar structure, based on the repetition of verses and choruses and looks like this: verse-chorus-verse-chorus-bridge-chorus. Again, the bridge is used to break up the normal pattern.

The Music of the Bridge

In both song structures, the bridge is used to bring something different into the song, keeping it from getting too repetitive. So, musically, we can expect the bridge to look different from the rest of the song. In terms of chord progressions, the bridge is often a direct contrast to the chorus. If the chorus focuses on major chords, the bridge will use minor chords. Sometimes the bridge is actually in a different key entirely. The melody reflects these same changes.

So, why do we do this? Well, think back to the purpose of a bridge: it gets you between two points on the same path. Music always has a direction, created by the building and release of tension through the progression of chords. The tension is generally resolved in the chorus, but the resolution is really only as good as the tension itself.

Think back to that hiking metaphor. Your normal verse-chorus pattern would be like walking up a hill, reaching the top, then hiking down that hill and up another one. It's adventurous, but repetitive. Then, you come to the top of a hill and rather than a soft slope into another valley, there's a raging river with rapids and waterfalls and…crocodiles…and stuff. It's dramatic. After crossing this, reaching the top of the next hill is going to be a much greater release of tension. The bridge of the song adds drama and builds up tension so that the final chorus is a memorable and emotional resolution.

Lyrics of the Bridge

Just as the harmonies and melodies of the bridge are different from the usual pattern of the song to build up drama, so are the lyrics. In your average song, the verses tend to be informative and complex, with the chorus being emotional and direct statements of the main message. The bridge combines these two. Bridges increase the emotional impact of the song by alternating quickly between new information and strong emotional statements.

Since bridges are very frequently written in minor keys, emotional lyrics fit in well and enhance the tension already being built up by the chords and melody. Just from the music, our bridge was already covering a chasm of rapids and crocodiles, but add in lyrics and now the bridge over the river is on fire! It just keeps getting more exciting!

However, while a flaming bridge is exciting, it's not something you want to spend a lot of time on. The musical bridge, just like the bridge in our metaphor, tends to feel somewhat unstable thanks to the use of chords and melodies not found throughout the song, as well as the rapid alternation between information and emotion. This creates a sense of urgency, driving the listener more quickly towards the resolution and creating a better release of tension once we get there. We cross the bridge, filled with excitement and anticipation, make it to the top of the last hill and finish the journey. What a trip!

American popular music follows a few basic structures, most of which contain a bridge, a break from the normal pattern that adds excitement. In the thirty-two bar form of songs, represented as AABA, the A section is repeated three times with the B (the bridge) breaking them up. In the verse-chorus model, verse-chorus-verse-chorus-bridge-chorus, the bridge plays a similar role. This section musically and lyrically breaks from the established pattern to create a greater emotional buildup of tension that highlights the resolution of that tension in the last chorus. Turns out, a bridge does more than just get you from one point to another. It can define the entire journey.

What is a Chorus in a Song? | Definition & Examples

What is a Verse in Song? | Examples

Interlude Music & Songs | What is an Interlude in Music?

Song Overview, Types & Examples | What is a Song?

What is the Bridge of a Song? - Definition & Examples
Related Study Materials

What is a Chorus in a Song? | Definition & Examples

What is a Verse in Song? | Examples

Interlude Music & Songs | What is an Interlude in Music?

Song Overview, Types & Examples | What is a Song?