The chain of custody is used in maintaining criminal evidence throughout an investigation. Look into the definition, procedures, and importance of this process, including documentation, contamination prevention, evidence seals, and tracking. Updated: 11/15/2021
Create an account

Imagine you are a crime scene specialist investigating a homicide. During the investigation, you find a drop of blood on the floor, near the doorway, leading away from the victim's body. This could definitely be important evidence, so it needs to be collected.

How do you go about doing this? If the blood ends up being critical to the case, you will have to testify in court that you collected it. You'll have to explain where you found it and how it was collected, and you will have to swear, under oath, that the swab presented to the court is the same one you collected. The trial might not take place for months or even years! How will you be sure this evidence is tracked, logged, and protected from tampering?

For this lesson, let's follow the documentation, collection, and packaging process for the blood on our homicide investigation. You'll see all the different steps required for creating and maintaining a chain of custody when it comes to crime scene evidence. 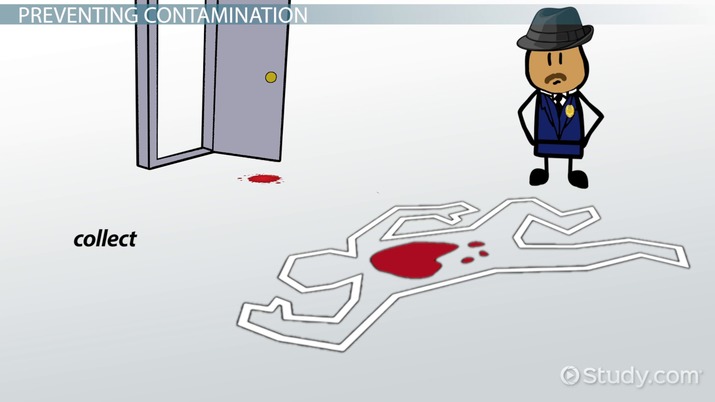 Coming up next: Witness: Definition & Role in Criminology

Most police agencies and crime labs will label items of evidence with a number once it has been located. In the picture below, the investigator has labeled the crowbar as item #1 and is photographing it in place. This is usually the starting place for documenting the location of the evidence.

Once the item has been photographed, crime scene investigators will take measurements of the evidence to further document its location. There are several methods for measuring evidence on a crime scene, but one of the most common methods is the rectangular coordinates method.

To use this method, the investigator picks a fixed point in the scene (or a reference point), such as the northwest corner of the master bedroom, then measures the distance to the evidence from that point. Let's use our blood as an example. This simple sketch shows us that the blood was found on the floor, eight feet and nine inches east of the fixed point and nine feet and two inches south of the fixed point:

After the blood stain is documented in place with photographs, notes, and sketches, we are now ready to collect it. In the example, you will need to collect the blood using a sterile swab. Because you are touching the swab to the evidence (the blood), it needs to be sterile, so that you can be sure you aren't contaminating the evidence with anything that might have been on the swab. You will also need to wear gloves while doing this, so that you don't contaminate the swab with any of your own DNA. Wearing gloves is a cardinal rule for almost all crime scene investigations. If the investigation requires it, additional PPE, or personal protective equipment, like shoe covers, hair nets, masks, goggles, and body suits, may be required.

Now that we have documented and collected the evidence, what's the next step in chain of custody? You will need to be sure that the evidence collected makes it from the crime scene to an evidence storage facility without being tampered with or lost. Many crime scene units transport their evidence to a crime lab for further analysis once it is collected from the scene. To ensure the evidence is not tampered with, a crime scene specialist will create an evidentiary seal, or evidence seal, on the packaging he used for collection. The blood swab from our homicide investigation will be placed in a sterile envelope and sealed with an evidence seal. Evidence tape has jagged little edges on it, which makes it almost impossible to peel off without breaking.

But this type of tape isn't necessary for creating an evidence seal. An evidence seal can be created with regular packaging tape if the collector's initials and badge or employee identification number are added to the tape.

This seal allows the collector to recognize his own hand-writing on an unbroken seal. So if the package with the swab you collected is handed to you during trial, several years from now, you will be able to say that the evidence seal you created is intact. You can then testify with confidence that the evidence has not been tampered with or altered and when the evidence was sealed in the envelope if the date was added.

Evidence needs to follow a chain of custody, or the processes for documenting, collecting, and protecting evidence. It has to be documented when it is found on scene. Documentation steps include photography, note taking, and sketching. It also has to be collected in a manner that protects it from contamination. It must be marked and packaged with an evidence seal to ensure it is not tampered with or compromised once it has been entered as evidence in a storage facility or crime lab. Following all of these steps ensures that the chain of custody is not broken and allows for an investigator to testify with confidence when asked about the integrity of evidence during a trial.

By the time you complete the video, you should be able to:

What is the Chain of Custody? - Definition, Procedures & Importance
Related Study Materials

Crime Scene Overview & Components | What Is a Crime Scene?

What Is a Polygraph Test? - History, Reliability & Accuracy