Fats are a nutrient that can be beneficial or harmful depending on the fat type consumed. Explore the types of fats, how the molecular structure defines a fat as cis or trans, and the health effects of these fat types. Updated: 01/12/2022
Create an account 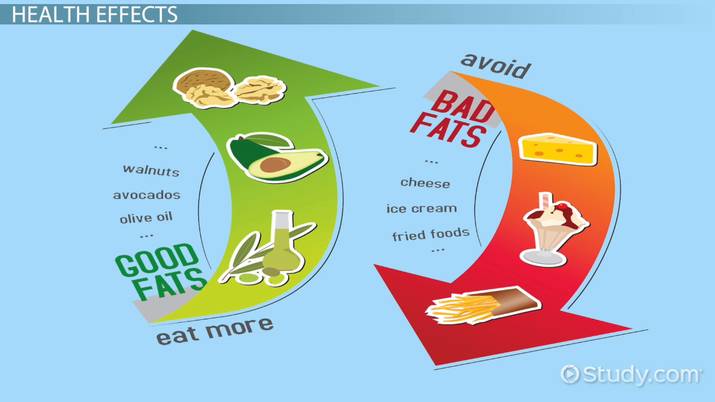 Coming up next: What is a Natural Antibiotic? - Foods & Plants

So, let's take a look at a fat. Really a fat (or a fatty acid) is just a long carbon chain with a carboxylic acid at the end. Typically, the carbon atoms orient themselves alternating up and down. This orientation makes the most stereochemical (the 3D conformation of the molecule) sense because the large carbon atoms are not bumping into each other and interfering with each other. Think about trying to fit cups into a small cupboard. If you simply place them all in the same direction, you can't fit as many in the same space as if you rotated the direction. This same thing is true with atoms; if the larger atoms alternate, then the molecule can fit together better.

When a double bond forms it can either form in the cis or the trans configuration. In nature, the cis double bond is usually formed.

When trans fats were first created, scientists were excited. Here, they had found an unsaturated (healthy) fat that could act like a saturated fat in baking. But it was soon realized that the trans fats acted like saturated fats when it came to health, so the theory of this being a healthy alternative went out the window. However, trans fats continued to be used because they are very stable, with a longer shelf life without going rancid, and inexpensive, because they are often made from cheap vegetable oils.

As time continued, it became more and more apparent that trans fats have additional health risks, above and beyond that of saturated fats. Both trans fats and saturated fats increase your LDL (bad cholesterol), but trans fats have a double whammy because they also decrease your HDL (good cholesterol). Since low LDL levels and high HDL levels are necessary for good heart health, decreasing HDL while increasing LDL is particularly bad for your heart.

What is the Difference Between Cis and Trans Fats?
Related Study Materials

Effects of Feasting & Fasting on Cells

Function of Fats in the Body | Fat Molecule Structure & Composition