The glomerular filtration rate (GFR) is the amount of blood filtered per unit of time by the kidney's glomerulus into the Bowman's capsule. Learn about GFR through definitions and terms, explore the function and complexity of GFR, and discover factors that increase or decrease GFR, including hydrostatic pressure and oncotic pressure. Updated: 08/26/2021
Create an account

Imagine a future intergalactic war where our kidney's glomerulus is a galaxy. In this war, you've got humans pitted against giant ogres. The humans of the Hydrostatic Republic want to escape this galaxy, while the ogres of the Oncotic Empire want to prevent them from doing just that. This type of war of opposing forces plays out in your kidney's glomeruli and influences something important called the glomerular filtration rate. 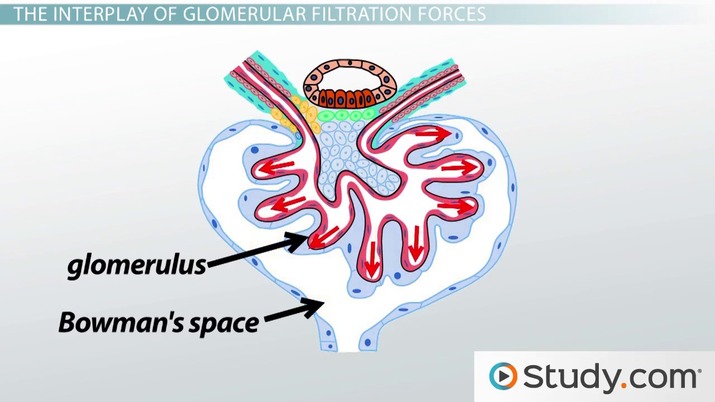 Coming up next: The Renal Tubule: Definition, Function & Terms

What Is the GFR?

The glomerular filtration rate is the amount of blood filtered by the kidney's glomerulus into the Bowman's capsule per unit of time. It is sometimes abbreviated as GFR. This rate of filtration is influenced by the interplay of several important forces.

The Interplay of Glomerular Filtration Forces

Recall our introductory example of the humans fighting evil ogres in a galactic war. The humans of the Hydrostatic Republic want to escape the glomerulus, while the ogres of the Oncotic Empire want to keep the humans in the glomerulus.

Regardless, you can rest easy tonight because this movie, like most Hollywood movies, ends on a good note. The winner of this war is the Hydrostatic Republic. This is because its glomerular hydrostatic pressure is higher than the combined glomerular oncotic pressure and hydrostatic pressure of the Bowman's space. Since it is higher than the two forces opposing the filtration of blood, your blood is able to be filtered by the glomerulus, and therefore, urine can be produced.

The Complexity of GFR

Of course, this is the dynamic under normal conditions right at the beginning of the process of ultrafiltration. These forces shift up and down as the blood is filtered, as the systemic or local blood pressure is altered, or as disease sets in. Things like the surface area available for filtration and the permeability of the capillaries also play an important role. The details of this are way beyond the scope of this lesson or its needs.

However, there is one thing to keep in mind. If there is a problem in your body that causes the GFR to decrease or increase beyond its normal rate, you have two systems, called tubuloglomerular feedback and the renin angiotensin aldosterone system, which do their best to bring the GFR back up or down into its normal range.

That is to say, the systems in our body that regulate the GFR try to keep it at a constant rate. Hence, when you hear that GFR is increased due to tubuloglomerular feedback or the renin angiotensin aldosterone system, it is indeed being increased; however, it's only being increased back to a normal rate because something brought it down in the first place.

Okay, I'll stop frying your brain with any more information. The humans won, the ogres are dead, and we should all be happy we can produce urine.

Regardless, do recall one more time, that the GFR, also known as the glomerular filtration rate, is the amount of blood filtered by the kidney's glomerulus into the Bowman's capsule per unit of time. This rate of filtration is influenced by the interplay of several important forces.

The other force, with respect to the glomerulus, is called oncotic pressure, which is the pressure exerted by colloids (principally proteins called albumin) within the glomerulus.

Glucagon Overview & Function | What is Glucagon?

Scope of Practice for Massage Therapists

Detecting a Heart Attack with an EKG