Emily has a master's degree in engineering and currently teaches middle and high school science.

The golden ratio in mathematics is used as a reference for creating patterns and shapes. Learn about the definition of the golden ratio and see some examples of it present in the world. Updated: 10/16/2021
Create an account

Definition of the Golden Ratio

The golden ratio is an irrational number represented by the Greek letter phi (φ) that's used to create geometries with what many people consider the most eye-pleasing proportions. Some of the different formats used to express the golden ratio are shown here:

The use of the golden ratio surged in popularity during the Renaissance, identifiable in both the art and architecture of the era. Some have also contended that the ancient Greeks intentionally constructed the Parthenon according to the golden ratio. In any case, phi continues to captivate our interest to this day, but how exactly does it work in action? 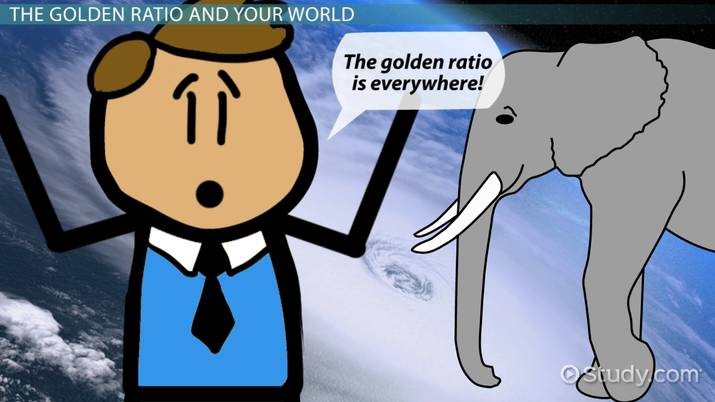 Coming up next: What is a Matrix?

The Golden Ratio and Geometry

One of the simplest examples of the golden ratio in relation to geometry is a special line segment called the golden segment, illustrated here:

Another notable appearance of the golden ratio in geometry comes in the form of the pentagram. Whether you believe it's a symbol of witchcraft or divinity, one thing is for certain: it's golden.

Just like the line we saw earlier, the pentagram can be broken down into segments that are related through the golden ratio. If each side of the outer pentagon (or the green sides) is equal to 1 unit, then the length of each side of the inner pentagon (or the purple section) is 1/φ². Furthermore, the length of each of the five lines that create the perimeter of the star shape (or the orange part) would be equal to phi.

The presence of the golden ratio in geometry does not stop with the pentagram. The same relationships can be demonstrated in more complex three-dimensional shapes such as dodecahedrons and icosahedrons, which have 12 faces and 20 faces, respectively.

The Golden Ratio and Your World

For what may so far seem like your average irrational number, the golden ratio has become almost mythical, and a target of misinformation in popular culture. Some sources claim that the golden ratio is found just about everywhere, from the shapes of hurricanes and spiral galaxies, to an elephant's trunk. These examples, however, have been disputed. Studies have reported that our beauty standards are based on the golden ratio, and that faces exhibiting the golden ratio are more likely to be identified as beautiful. Though evidence does exist in support of this idea, it too has sparked debate. This kind of thing would never happen with pi!

It's not a stretch to say that the Fibonacci sequence is everywhere in nature. It appears in flower seeds, pineapples, in the arrangement of branches and leaves on a tree, and in the spiral patterns of certain shells.

Take this pinecone, for instance. If you count the number of blue spirals running clockwise from the middle of the base, you'll get 13; counterclockwise, there are 8 green spirals. This is a fascinating parallel between math and nature, but it's not exactly the golden ratio.

Again, we learned that the golden ratio is an irrational number represented by the Greek letter phi (φ) that is used to create geometries with what many people consider the most eye-pleasing proportions. We saw how it can be expressed as an infinite number and as an algebraic expression. We also explored some of the geometries that hinge upon the golden ratio and we examined the relationship between the golden ratio and the Fibonacci sequence. Keep all this information in mind next time you hear someone claiming that they see the golden ratio everywhere!

What is the Golden Ratio in Math? - Definition & Examples
Related Study Materials

Fibonacci Sequence List & Examples | What is the Golden Ratio?

How to Find the Cartesian Product

What are the Disciplines of Mathematics?

What Are Frieze Patterns?

How Mathematical Models are Used in Art