The Hippocratic Oath is a sworn agreement that medical students take when they become doctors. Learn the components of the oath as well as how it pertains to ethical issues or bioethics. Updated: 12/21/2021
Create an account

What Is the Hippocratic Oath?

When you think of the Hippocratic Oath, you probably think of, ''First do no harm.'' However, it turns out that those particular words aren't even in the oath. In this lesson we're going to talk about what is found within the oath and its implications.

The Hippocratic Oath is a sworn agreement made by physicians when they become doctors. It isn't a law but rather a guiding principle for doctors. It was written by the Greek physician Hippocrates, who lived from 460 to 377 BC. It's one of the oldest binding documents in history and has great symbolic importance for medical doctors.

It has been rewritten multiple times, and medical schools use different versions. Some use the original Greek oath, while others use the Declaration of Geneva or the Oath of Maimonides, both of which reference the original. Whichever version is used, virtually all medical schools use an oath of some kind. Let's take a look at its basic components. 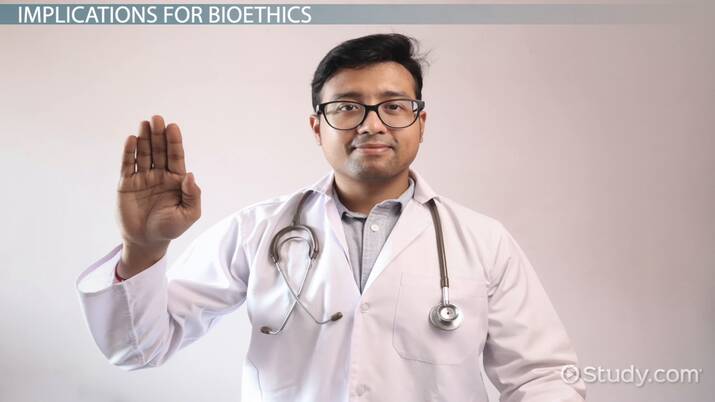 Coming up next: Ethical Issues in Medicine & Psychology

Components of the Oath

The original oath starts by swearing on the Greek god Apollo to fulfill the oath. The oath begins with an agreement by practitioners to openly share knowledge with the physicians that follow them for the sake of the profession. The second part, and perhaps the most well-known, swears that treatments will be used for the benefit of the ill and not for harm. That's the ''do no harm'' part, though it's worded quite differently:

''With regard to healing the sick, I will devise and order for them the best diet, according to my judgment and means; and I will take care that they suffer no hurt or damage.''

Finally, the oath talks about doctor-patient confidentiality, requiring that doctors do not reveal details of their meetings, conditions, or treatments.

Bioethics is the study of ethical issues that result from advances in biology and medicine. Many of the issues it deals with are controversial and create disagreements. This includes topics like abortion, euthanasia, surrogacy, and the proper use of limited health resources. Likewise, the refusal of medical care for religious or cultural reasons, genetic modification, and life extension are considered to be highly controversial.

The Hippocratic Oath has significant implications for the field of bioethics. If nothing else, the Hippocratic Oath is framed as a moral code for physicians to follow. Many of its statements are universally agreed upon by doctors.

However, the oath also addresses euthanasia and abortion, which are more controversial moral issues. These topics are often removed from modern versions of the Hippocratic oath, but a large proportion of medical schools still use the original. This opens up debate regarding these issues and their place in the historical context of the Hippocratic Oath.

The Hippocratic Oath is a sworn agreement made by physicians when they become doctors. It includes a promise to share knowledge, to help the ill and not cause harm, and to never give a deadly drug or help another to use one. It also directs doctors to not conduct an abortion, to refer patients to specialists for surgery, to not take advantage of their patients (especially sexually), and to preserve doctor-patient confidentiality.

The oath is a code of ethics for all positions, and therefore, has significant implications for bioethics, which is the study of ethical issues that result from advances in biology and medicine. While much of the oath is not controversial, the references to euthanasia and abortion certainly are. This generates debate about these issues and requires people to think about the Hippocratic Oath in its historical context.

What Is the Hippocratic Oath? - Definition & Parts
Related Study Materials

What Is Medical Negligence? - Definition & Examples

What is the Rod of Asclepius? - Meaning & History

What is Nonfeasance? - Definition & Examples

What is a Diagnosis Code? - Definition & Uses

What is Amoeboid Movement?