The Panama Canal is a man-made canal that cuts through the Isthmus of Panama to connect the Pacific & Atlantic Oceans. Learn about the historical background, interesting facts, & America's involvement in the building of the Panama Canal. Updated: 10/12/2021
Create an account

What Is the Panama Canal?

The Panama Canal is a 50-mile, man-made canal cutting through the Isthmus of Panama that connects the Pacific and Atlantic Oceans. It was constructed by the United States in order to find a waterway route between the two oceans.

The Panama Canal represents both the best and worst of the United States. It represents the best in showing American ingenuity and engineering in creating a sustainable system for getting between the Pacific and Atlantic Oceans. But, at the same time, it highlights a negative period in American foreign policy, in which the United States bullied around the countries of Latin America. 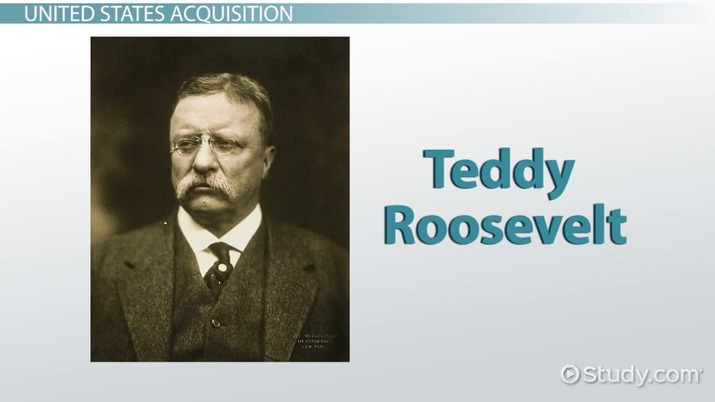 Try it now
Back
Coming up next: William Howard Taft: Biography, Facts & Quotes

Ever since Europeans realized that Columbus had discovered a 'new world' and not a route to Asia, explorers became fascinated with the idea of finding a direct connection between the Pacific and Atlantic Oceans. Sure, Ferdinand Magellan had circumnavigated the globe, but his route required sailing south along the Atlantic Ocean, circling around the southern tip of South America, and moving up the Pacific Ocean on the western side of South America. Such a route was highly impractical. Other explorers searched for the legendary Northwest Passage, the supposed water route in North America that connected the Pacific and Atlantic Ocean. We now know that such efforts were worthless, because such a route has never existed.

The truth is no water passage in North America or South America existed connecting the Atlantic and Pacific Oceans. There was, however, one narrow strip of land, approximately 50 miles wide, that connected North America and South America in Southern Central America. This strip was called the Isthmus of Panama. The idea began to be floated around - what if a man-made water way could be constructed in this narrow passage to connect the two oceans? Surely, that would allow for a water connection between the two waterways.

Imagine working in a rainy jungle, with constant mudslides and widespread mosquitoes carrying a multitude of disease. Doesn't sound like fun, does it? For this reason, the first attempts by French entrepreneurs to build a canal were worthless. From 1881 to 1894, the French tried to build the canal. But the rainy conditions made construction nearly impossible, and the French entrepreneurs had to give up after going bankrupt and losing 22,000 workers to disease and injury.

After the French realized that they would be unsuccessful, they sought potential buyers for the project. The United States decided to purchase the canal, negotiating the terms with Colombia, the country that had sovereignty over the canal. The treaty, known as the Hay-Herran Treaty, allowed the United States to lease the territory.

Have you ever had someone give you their word, only for them to go back on their promise? Well, the United States essentially did this with Colombia by negating the Hay-Herran Treaty.

The way in which the United States acquired the Panama Canal has often been compared to bullying. The U.S. quietly threatened Colombia and forced Panamanians to accept the terms of the Bunau-Varilla Treaty. For this reason, U.S. foreign policy at this time has often been called gunboat diplomacy.

U.S. Construction of the Canal

The construction of the canal took ten years and cost $375 million. To complete the canal, U.S. engineers had to create the world's largest man-made lake, the world's largest dam, and a system of locks that would lift boats up on to lakes to make transport of the boats more efficient. For a boat to cross the 50-mile canal, it takes roughly 30 hours. Today, it is considered one of the great engineering feats of the modern world.

Disputes Between U.S. and Panama

Despite the U.S.'s close relationship with Panama, it didn't take long for Panamanians to realize the raw deal they got. Panamanians began protesting U.S. control of the canal, which they felt should be controlled by Panama. In 1976, President Jimmy Carter signed a treaty with Panama that gave over control of the canal to Panama on December 31st, 1999, in exchange for the promise that the canal would be internationally open at all times.

Today, the Panama Canal is one major source of income for Panamanians.

Because there is no natural waterway in the Americas to connect the Atlantic and Pacific Oceans, people have been trying to build a canal through the 50 mile-wide Isthmus of Panama since 1881. After the first failed attempt by the French, the United States acquired rights to the area first through a treaty with Colombia and then through a treaty with Panama, called the Hay-Bunau-Varilla Treaty. The United States was often criticized for unfair dealing, or gunboat diplomacy, in regards to the treaty. The canal, however, was constructed over ten years at a cost of $375 million, and it is still considered a marvel of engineering. In 1976, President Carter signed a treaty that turned over control of the canal to Panama in 1999 in exchange for a promise that the canal would remain open for international use.

Explore this lesson so that you can subsequently:

The Creation of Great Britain & The English Bill of Rights

Ghost Dance at Wounded Knee: Movement & History | What was the Ghost Dance?

Espionage and Sedition Acts of 1917 | What Was the Espionage Act?

The Rise & Fall of Napoleon | Who was Napoleon Bonaparte?

The Creation of Great Britain & The English Bill of Rights

Ghost Dance at Wounded Knee: Movement & History | What was the Ghost Dance?

Espionage and Sedition Acts of 1917 | What Was the Espionage Act?

The Rise & Fall of Napoleon | Who was Napoleon Bonaparte?