Robin has a PhD in health psychology. She has taught undergraduate and graduate psychology, health science, and health education.

A fetus receives nourishment from its mother through the umbilical cord. In this lesson, the reader will learn more details about what the umbilical cord is and how it functions, including potential problems and cord blood storage. Updated: 10/12/2021
Create an account

Have you ever contemplated your navel? This part of your body, also known as the belly button, was once the entry point for a very important anatomical structure called the umbilical cord. In simple terms, the umbilical cord is a growing fetus's lifeline. It is a flexible, tube-like structure that connects a fetus to the mother's placenta. The placenta is an organ attached to the uterine wall that, in turn, connects to the mother's blood supply. 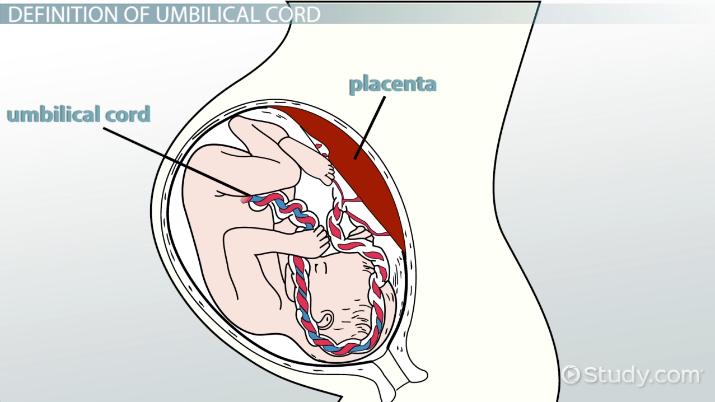 Coming up next: The Perinatal Environment and Potential Hazards During the Birth Process

The umbilical cord forms around the fifth week of pregnancy and can grow up to 20 inches long at full-term. It is a tough, sinewy structure with two main layers: an outer layer of smooth muscle, and an inner layer containing a gelatinous fluid called Wharton's jelly. There are typically three vessels within this substance: one vein and two arteries. The vein carries oxygen and nutrient-rich blood from the placenta to the fetus, and the arteries carry deoxygenated and nutrient-depleted blood away from the fetus.

The umbilical cord enters the fetus through the abdomen and turns into two branches: one joins with the hepatic portal vein in the liver, and the other connects to the heart through the inferior vena cava. These two branches form a circuit in the fetus's body and reconnect to the umbilical cord outside. In rare cases, the umbilical cord may not develop correctly, or some other problem occurs during birth. Sometimes these problems can be detected via ultrasound before birth, but in many cases, they are not noticed until after the baby is born. Let's look at some of these potential issues and how they can affect the baby.

The blood inside the umbilical cord is called cord blood, and it contains undifferentiated (blood-forming) stem cells. This blood can be removed from the cord and stored in private or public banks with the intention of treating illnesses like leukemia and sickle cell anemia. Some parents decide to store this blood in a private bank in case the child or a family member needs the stem cells later in life. Private banking is the subject of some controversy. Many medical professionals discourage storage for self-use because most health conditions will already be present in the cord blood, and it is highly unlikely that the child will actually use the cells. Additionally, it is a very costly practice compared to public banking.

Given the controversy and concern surrounding private banking, there is some promise in the storage and use of cord blood in public banks. These banks collect donations for public use, and donated stem cells are already being used to save lives. For example, if there is a difficulty finding a bone marrow donor for a child with leukemia, these cells can be transplanted, effectively increasing the donor pool. Researchers are currently studying the many potential uses of these cells.

Now that you've finished the lesson, you're ready to:

What is the Umbilical Cord? - Definition & Function
Related Study Materials

The Amnion and the Umbilical Cord: Structure and Function

What Is Eclampsia? - Definition, Symptoms & Treatment

What is the Placenta? | Placenta Development, Location & Function

Fetal Dystocia: Normal and Abnormal Fetal Positions Prior to Childbirth

Abortion and Miscarriage: Methods and Causes

How the Placenta Nourishes the Fetus

The Placenta and the Fetus: Structure and Function

What Is Chorionic Villi? - Sampling & Definition