''The Twelfth Night,'' written by Shakesphere was intended to be a comedy about how a shipwrecked brother and sister get along in a new land. Learn more about the novel's plot, read a summary of its major points, and further analysis. Updated: 11/30/2021
Create an account

Let's imagine for a second that a new guy comes to your school. He is witty, charming, and hilarious, and not to mention exceptionally good looking. He makes a great addition to your group of guy friends, and he listens to everything you say. Another cool thing about this guy is that he's great with the girls, too. That's great for you, since the girl you've had a crush on forever seems to think your new friend is really cool, and he can put in a good word for you. But, how would you feel to find out that your crush is in love with your new friend? To make matters worse, you then find out that your new homeboy is not a boy at all, but a girl, and she's in love with you. While this story sounds like a soap opera, it's actually the premise of William Shakespeare's play Twelfth Night, and that crazy story was what happens to Duke Orsino, when he hires a page named Cesario, who is actually noblewoman Viola in disguise. At the end of the play, like in most of Shakespeare's famous comedies, everything is revealed and there is a happy ending, and maybe even a wedding. 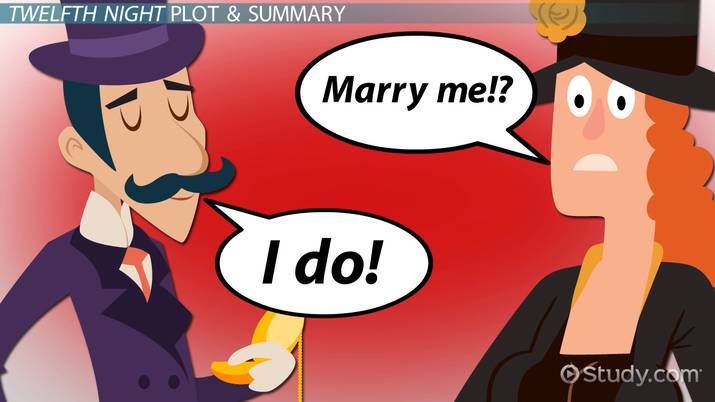 At the beginning of Twelfth Night, we encounter Viola, who has been shipwrecked off the coast of Illyria. She can't find her brother, Sebastian, and is afraid he drowned. Viola is a noblewoman, but since she's all alone in the world, she needs a way to make a living. The sea captain that helped to save her from the shipwreck tells her all about the Lady Olivia, and Viola would like to work for her, but the Lady Olivia is in mourning for her father and brother and refuses to see anyone new. Viola then disguises herself as a man named Cesario, and the captain helps her find work at Duke Orsino's house. Orsino takes a liking to Cesario/Viola, and makes her his page.

Orsino is in love with Lady Olivia, but since she's in mourning, she refuses his advances. Orsino sends Cesario/Viola to Olivia's home to plead his case, and Olivia again rejects the pleas of Orsino. However, despite being sad, she is attracted to Cesario/Viola and falls in love with the page. This creates a love triangle among Orsino, Olivia, and Viola, who's falling in love with Orsino as she spends time with him.

While Cesario/Viola is accidentally making Olivia fall in love with her, the members of Olivia's household are up to some serious hijinks. Her snotty steward, Malvolio, is in love with Olivia, and her uncle Sir Toby, his friend Sir Andrew (who is also trying to woo Olivia), Feste the clown, and Olivia's lady in waiting Maria are playing a joke on him. They convince him to act crazily and wear his garters crossed, and perform all sorts of other outlandish behavior by dropping a note that's supposedly written by Olivia. Malvolio harbors a desire to be married to Olivia and does what the note requests, much to the amusement of the pranksters, who are happy to deliver some payback for his rude behavior towards them.

Meanwhile, Sebastian is alive and is staying with Antonio, who rescued him after the shipwreck. Sebastian decides to go to Orsino's court, and Antonio, who appears to be obsessed with Sebastian, decides to go with him, despite the fact that he and Orsino do not get along at all.

Sir Andrew is still trying to win Olivia's hand, and gets jealous when he perceives Cesario/Viola as having the upper hand. He challenges Cesario to a duel. However, it's Sebastian who shows up accidentally, and Sir Andrew begins to fight with him instead. Olivia bursts onto the scene, and thinking that Sebastian is Cesario, asks him to marry her. While Sebastian is confused, he is attracted to Olivia's wealth and beauty and accepts.

At the same time, Antonio has showed up to Orsino's household, and he's taken away by the guards. When he sees Viola dressed as Cesario, Antonio asks her for help, thinking she is Sebastian. Viola is understandably confused and denies knowing Antonio, who is upset when she denies him. However, this leads Viola to believe that Sebastian may not be dead after all. While all of this confusion is happening, Malvolio has been confined to a room by Maria and Feste the clown. Everyone thinks he is crazy, and the pranksters are loving their joke on Malvolio. Sir Toby allows Malvolio to write a letter to Olivia, asking to be released from the room, since he's feeling a little guilty about his part in the joke.

Orsino and Cesario/Viola head to Olivia's house, where Olivia is excited to see Cesario/Viola, thinking that she is Olivia's new husband. Orsino gets angry at Cesario/Viola, thinking that she has double-crossed him. Sebastian walks in, and he and Viola are overjoyed to see each other, and to know that the other is actually alive. Orsino finds out that Viola is actually a girl, and realizes that he is in love with her. Maria and Sir Toby join the party, and it becomes revealed that they are married as well. The play ends with everyone happy and together, except for Malvolio, who runs off bitter and alone.

Let's take a few moments to review what we've learned about Twelfth Night's plot. William Shakespeare's Twelfth Night is a comedy about a brother and sister pair that are shipwrecked off the coast of Illyria and are separated. Viola, the sister, must assume the identity of a man to earn a living in the home of Duke Orsino, who is in love with the Lady Olivia. Olivia falls in love with Viola's alter ego, and Viola herself falls in love with Orsino. During all of this, the members of Olivia's household are playing an elaborate prank on her snooty steward, Malvolio. When Sebastian comes back into the picture, all is revealed, and he and Olivia marry, and Viola reveals herself to Orsino, who realizes he is in love with her.

What Is Twelfth Night About? - Plot & Summary
Related Study Materials

Much Ado About Nothing Study Guide