Ultraviolet (UV) light is a type of electromagnetic radiation that is all around us even though our eyes can't detect it. Our bodies use it to make vitamin D, but too much exposure can cause painful burns and even cancer. Although UV light can be dangerous, it is also very valuable and is used in many ways. UV light is used to identify biological materials, like blood, at crime scenes and in places where sanitation is important. Because it can kill viruses and bacteria, it is also used to sterilize medical and biological research facilities and to sanitize much of our food and water. 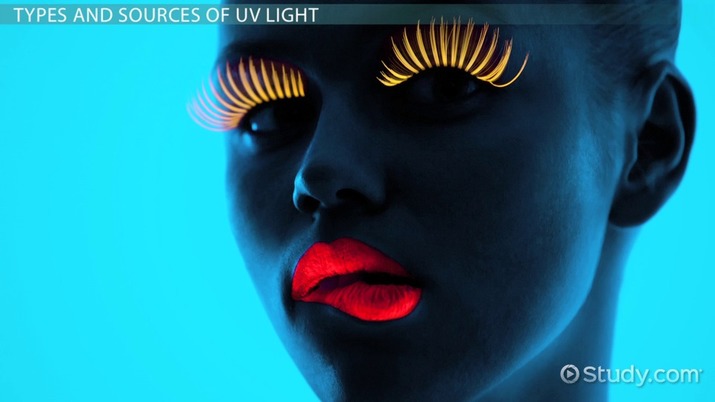 Coming up next: What is Visible Light? - Wavelength & Spectrum

Types and Sources of UV Light

The UV spectrum is divided into vacuum UV (40-190 nm), far UV (190-220 nm), UVC (220-290 nm), UVB (290-320 nm), and UVA (320-400 nm). The highest energy forms of UV light (Vacuum UV, Far UV, and UVC) are almost completely absorbed by the Earth's atmosphere in the ozone layer. However, UVB and UVA rays do penetrate the ozone layer. UVB is typically the most destructive form of UV radiation because it has enough energy to damage cellular DNA yet not enough to be completely absorbed by the atmosphere. Humans need to be exposed to some UVB rays so that we can produce vitamin D, a critical nutrient for bone production and repair. However, overexposure to UV light can cause sunburn, cataracts, and eventually lead to the development of skin cancer.

UVA is the most commonly encountered type of UV light and also the least harmful. UVA exposure causing tanning of the skin initially, followed by sunburn after prolonged exposure. Ozone in the atmosphere absorbs very little UVA radiation, and it is present even on cloudy days. UVA is also needed by humans for synthesis of vitamin D. However, just like UVB, overexposure to UVA has been associated with toughening and wrinkling of the skin, suppression of the immune system, cataract formation, and skin cancer.

Some Applications of UV Light

Here are some different ways UV light is used by human beings.

When UV light shines on certain dyes, they emit a light in the visible spectrum called fluorescence. Many fabrics and papers contain UV sensitive dyes that emit visible light when exposed to UV light. This enhances the color of the dye and causes it to appear brighter. To prevent counterfeiting, most paper currency is printed with a watermark or strip of UV-sensitive dye that can only be seen using a UV black light. This is also commonly used on credit cards, passports, and other sensitive documents.

UV light is often used to identify the presence of bodily fluids like blood or urine. These substances will be fluorescent in the presence of UV light. This is used in crime scene analysis as well as to check for sanitation of bathrooms and other public spaces where these fluids may be present but invisible to the naked eye.

UV light damages DNA, and therefore, has the ability to kill bacteria and viruses. It's often used to sanitize workspaces in medical and biological research facilities and to sterilize water and other foods that would be damaged by heat sterilization.

UV light can be broken down into five different types based on their wavelengths, including vacuum UV (40-190 nm), far UV (190-220 nm), UVC (220-290 nm), UVB (290-320 nm), and UVA (320-400 nm). The first three types are absorbed into the ozone layer of the Earth's atmosphere, while UVB and UVA make their way through. It's actually UVB radiation that leads to DNA damage in humans (in addition to skin cancer, cataracts, and those painful sunburns you've probably had at one point or another). However, UV light is also used by humans to produce vitamin D.

UV light also has many applications in other areas. UV dyes are used in fabric and paper to make them appear brighter, and UV light will also cause biological substances, like blood and urine, to appear fluorescent. This is very useful in forensics. Since UV light damages DNA, it quickly kills DNA and viruses and is commonly used to sterilize food and water, as well as medical and biological research facilities.

After you've finished this lesson, you should be able to:

Which of the following is true concerning UV light?

What Are Forceps? - Definition & Types

Phases of The Ovarian Cycle: Overview from Puberty to Menopause