Yeast is a microorganism that belongs to the Fungi kingdom. It is found widely in nature and is used in making some of our favorite foods and drinks. Learn more about this tiny fungus and quiz yourself at the end.
Create an account

Have you ever found yourself walking past a bakery, only to be suddenly overcome by the aroma of freshly baked bread? It is an unmistakable smell, one that elicits an immediate craving for a fresh slice. This delicious smell is due in large part to yeast, an essential ingredient in bread. It's a single-celled microorganism and a member of the Fungi kingdom. When you hear the word fungus, you may picture yellow toenails and rashes. However, there are hundreds of different kinds of fungus, and yeast happens to be one that typically does more good than harm.

Scientifically speaking, fungi are the decomposers of the natural world. It is their job to break down dead matter and return organic molecules back to the earth. This is a very important process, as atoms and molecules are recycled through decomposition. When yeast decomposes organic matter, several useful chemical reactions take place.

But before we get into chemical reactions, lets zoom in and take a look at this microscopic creature. Yeast is a single-celled organism like bacteria. However, that is about all they have in common. Unlike bacteria, yeast has a nucleus which contains its genetic information and organelles. This makes yeast a complex cell, or eukaryote, whereas bacteria is a simple cell, or prokaryote.

Yeast can be found in a wide variety of places in nature. It can be in the air, in the soil, and on plants. It especially loves food sources such as fruits and flower nectar. Yeast is also found within our bodies. In healthy numbers, we don't notice the yeast inside us. However, if there is a proliferation of yeast for some reason, a person can suffer from a yeast infection.

Yeast consumes carbohydrates as its food source. It loves sugar and has quite a sweet tooth. This is the trait that makes it so important for us in creating some of our favorite foods and beverages. Through a chemical process, yeast creates waste products that we actually find quite useful! But how does this work? 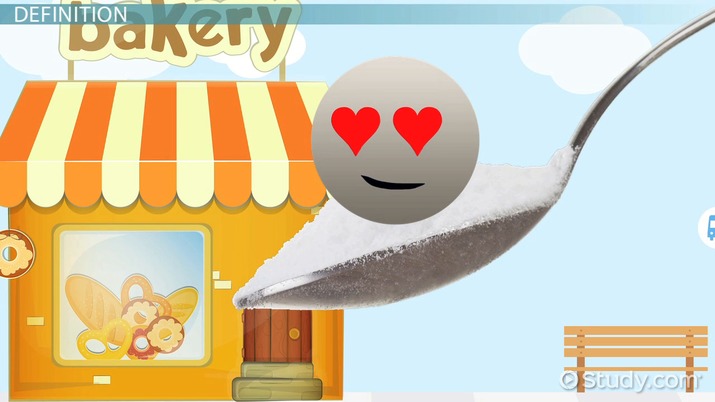 Coming up next: Pros & Cons of Genetically Modified Food

So how exactly does this tiny fungus make such a huge contribution to our world?

Yeast is used a great deal in baking. When a package of yeast is opened, it is in a dry and inactive state. Remember that yeast feeds off carbohydrates such as sugar. When the package of yeast granules are mixed with water and sugar, the yeast comes to life. It begins eating the sugar and creating carbon dioxide byproducts in the form of gas bubbles as a result. The process is called fermentation.

When this bubbly yeast mixture is combined with the rest of the bread ingredients, the bubbles create tiny spaces within the bread, thus making it rise. If you make bread without yeast, it's easy to see the difference when you pull a dense, flat loaf of bread from the oven!

Uses in Beer and Wine

We would have a hard time brewing beer if it weren't for yeast. Saccharomyces cerevisiae takes center stage in this process. You already know that carbon dioxide is a byproduct of fermentation. However, yeast also produces alcohol and other chemical compounds as a result.

In the case of brewing beer, the malt and hops are the source of sugar for the yeast. Through fermentation, compounds such as esters, ketones, and phenols are produced. Each lend a different flavor, or note, to that particular beer. This is why we have different types of beers such as stouts and ales.

In terms of wine, there would only be grape juice if not for yeast. Once again, our favorite fungi is responsible for fermenting the grapes in order to produce the alcohol that makes wine. The process is similar to brewing beer but with a different sugar source. In this case, the sugars in the juicy grapes are eaten by the yeast. Carbon dioxide is produced along with alcohol and the compounds that give the wine its flavor.

And of course, when fruit is left unpicked, it is known to ferment naturally. We've heard stories of birds and other animals exhibiting bizarre behavior after consuming these intoxicating treats.

Unfortunately, not all types of yeast give us such desirable products as beer and bread. There is another common species of yeast called Candida albicans that can be quite the villain. Candida lives in our mouth and intestines. As mentioned earlier, in normal numbers it goes unnoticed. However, if there is an overgrowth, health problems can set in such as skin and fungal infections as well as digestive issues.

Yeast is a single-celled microorganism that is a member of the Fungi kingdom. Yeast is found in nature as well as within our bodies. It consumes sugar and produces by-products such as carbon dioxide, alcohol, and other chemical compounds. Yeast is an essential ingredient in baking, brewing, and wine making. An overgrowth of yeast within our bodies can cause health issues.

What is Mold? - Definition, Types & Causes

What is Mold? - Lesson for Kids

What Are Antibiotics? - Definition, Types & Side Effects

What Are the Types of Diseases?

Bacteria and Mold: The Microbiology of Cheesemaking

What Is a Yield Test?