There was more to Greek mythology than just the gods. In this lesson, we are going to get to know a different divine being and see what role he played in the Greek cosmos. Updated: 08/30/2021
Create an account

You know how sometimes the light hits at just the right angle and it almost feels divine? Well, to the ancient Greeks it might have been. All things in nature were attributed to some deity, and in this case, that was the deity Hyperion. Hyperion was a Titan who presided over heavenly light and was father to the other lights of the heavens. He was a deity of watchfulness, a pillar that held the cosmos in place, and the one to set the patterns of days. How's that for a divine light? 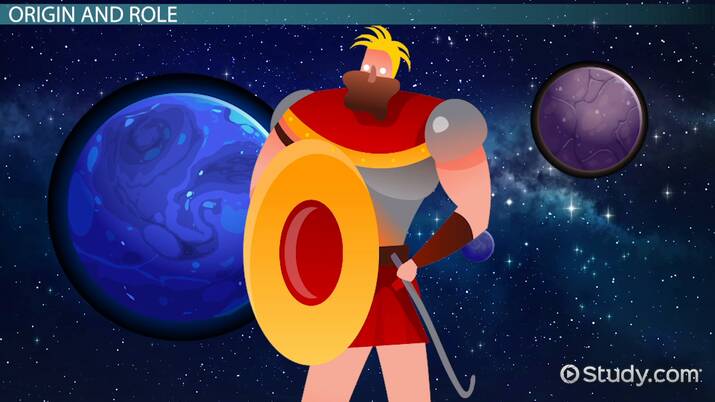 Coming up next: Theia in Greek Mythology - Story, Powers & Facts

Hyperion was one of the Titans, beings of great power who often personified cosmic forces. His parents were the primordial beings Uranus (the sky) and Gaia (the Earth). In these ancient times, Uranus behaved as a tyrant towards his children, prompting Hyperion's brother, Kronos, to plot a coup against him.

When Uranus came to Gaia, Hyperion and three brothers (Krios, Koios, and Iapetos) pinned him down so that Kronos could castrate him. Thus, the Titans overthrew their father and started a new era. Since the four brothers were responsible for restraining Uranus and keeping him from Gaia, they became the four cardinal pillars that hold up the sky and keep it from colliding with the world.

Over time, Hyperion married his sister Theia, Titaness of the mystical shimmering blue color of the sky called the ''aether.'' Together, the Titan of heavenly light and Titaness of the aether had three children representing the three lights of heaven: Eos (Dawn), Helios (Sun), and Selene (Moon).

Since Hyperion was the father of the dawn, Sun, and Moon, it's safe to assume that he represented the pillar of the east, the direction from which these heavenly lights appeared. However, his significance may be even greater than that. Think about this question: What is a day? What is a month? What is a year? Our calendars are based on the cycles of the Sun and the Moon. Hyperion set these heavenly bodies in motion as his children, and taught them the cycles that we use to measure our lives.

Hyperion was close to his Titan brothers, helping them overthrow their father and then build a new cosmos. However, his brother Kronos eventually had children of his own. They were the gods and they conspired to overthrow him just as they had done to their father. When Zeus led the gods into battle against the Titans, Hyperion seems to have fought alongside his brothers.

He was defeated and, with the other warring Titans, imprisoned in the pit of Tartarus below the world. According to some stories, this is where the roots of the earth, sky, and sea all rested. So the four Titan pillars who had once held up the sky would now be responsible for holding all of the cosmos in Tartarus. In at least one version, however, Hyperion and the others are eventually pardoned by Zeus and released. We can only imagine how bright the Sun must have shined on that day.

In Greek mythology, Hyperion was the Titan of heavenly light, a watcher, and the father of the dawn, Sun, and Moon. His wife was Theia, Titaness of the aether. Hyperion appears alongside the other Titans in helping Kronos overthrow their father, Uranus, making him one of the pillars that holds the sky in place. He also set the cycles of the Sun and Moon, and later fought the gods when they rebelled against Kronos. Hyperion was pretty important in Greek mythology, at least to anyone who expected to see the light of dawn, the Sun, the Moon, or simply the divine lights of the heavens.

Ajax The Great & The Trojan War | Who Was Ajax in Greek Mythology?

The Greek God Hermes | What is Hermes the God of?