Crystal has a master's degree in history and loves teaching anyone ages 5-99.

Captain John Smith of Jamestown influenced others to settle in America and had an important role in early American history. Find out about the history and overview of Captain John Smith's life, the Jamestown colony, and how Smith and England returned to America. Updated: 09/13/2021
Create an account

Who Was Captain John Smith?

Captain John Smith (1580-1631) was an English adventurer, soldier, explorer, and author. He is famous for his role in the exploration of the New World and is responsible for the settlement and survival of Jamestown, England's first permanent colony in America.

Smith is known as one of America's first heroes; however, due to both Smith's boastful nature and limited sources, many of his achievements have been masked by legends and fiction. What can be known for sure is that he was one of the founders of Jamestown, he led expeditions to explore the New England coast, and he was one of the best advocates and promoters for bringing more English settlers to America. These reasons alone show the importance of John Smith in American history. 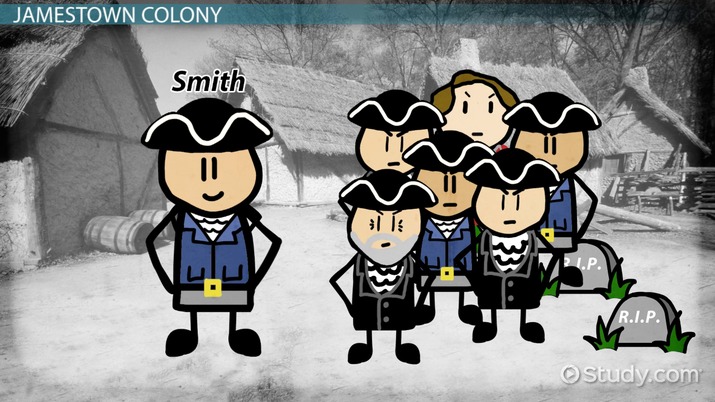 Smith's early life is covered in myths and legends. What is known for sure is that in 1597, he left his home in England and joined the English army against the Spaniards. He fought in many battles throughout Europe and at one point was captured by Turks in Hungary. Eventually, he escaped and returned to England in 1604.

Almost immediately upon his return, Smith became involved with the Virginia Company. The Virginia Company wanted to colonize North America for profit. They hoped to gain profit by finding gold and natural resources. In 1606, the Company gained permission from King James I, and Smith left for his expedition to the New World with three ships and 144 colonists. On this voyage, Smith was at one point suspected of trying to lead a mutiny and was almost hanged. However, he managed to get out of the situation alive, and the colonists landed in Chesapeake Bay, Virginia in April 1607.

The colonists began their settlement in the Chesapeake Bay area and named their colony Jamestown in honor of King James I back in England. Smith immediately became one of the seven leaders of the colony. During the first months, he thoroughly explored the Chesapeake region and sent many detailed letters of the geography back to England.

It was very difficult for the colonists in the first few months of starting their colony. They dealt with disease, malnutrition, lack of fresh water, and many problems from local Indians. Many of the initial colonists died from these harsh conditions. The seven-man council, including John Smith, dealt with the situation poorly, which did not help, and the colony's survival hung by a thread.

It was also during the first year of the colony (1607) that John Smith and some of his men were captured when they encountered an Indian hunting party. The other colonists in the group were killed, but Smith was taken to Chief Powhatan. It is said that Chief Powhatan's daughter Pocahontas saved Smith from certain death, though the real details of the meeting will probably never be known. However, the result was that Smith and Pocahontas became acquaintances, and Powhatan gave some property to Smith and called him 'son.' When Smith returned to Jamestown, he had to try to regain the trust of his fellow colonists, who were suspicious about why Powhatan allowed only Smith to live.

Due to these tensions with his fellow colonists, as well as terrible living conditions in Jamestown, Smith left the colony in the summer of 1608 to explore deeper into the Virginia lands. He searched for natural resources, gold, and more importantly, for desperately needed food. When Smith returned to the colony a few months later, he was almost immediately elected president of the council.

Smith became a tough but fair leader of the colony. He exclaimed to the often lazy colonists that only those that worked would be given food. His famous quote was 'He who does not work, does not eat.' This rigid work ethic helped the colony survive another winter. Tragically, after one year as president of the council, in 1609, Smith was wounded by a gunpowder explosion and had to return to England in order to recover. He never returned to Jamestown.

England and Smith's Return to America

When Smith returned to England, he immediately began to publish his reports on Virginia, which included detailed descriptions of the Native Americans, geography, animals, and plants. Smith's publications during this time were probably more important to history than his actions in Jamestown colony. His writings were used to promote the New World, and many Europeans decided to travel to America due to his publications.

By 1614, Smith became restless for adventure once again. He returned to America, but this time he explored the coasts of present-day Maine and Massachusetts. He named the area 'New England' in order to please the English king. While there, Smith wrote down more detailed reports on the region and especially noted that New England had vast natural resources in the form of fish and furs. After this last trip to America, Smith retired to England, where he spent his remaining years writing more accounts about his explorations and adventures. He died in 1631 at the age 51.

Captain John Smith (1580-1631) was an English adventurer, soldier, explorer, and author. His life may be shrouded with legend, but he still played a very important role in early American history. Under his leadership, Jamestown managed to survive its first two years. Smith also helped explore Virginia, Maine, and Massachusetts. Most importantly, Smith was one of very few colonists who wrote about the first years in the New World. His writings not only encouraged more settlers to come to America, but helped historians understand what happened during those critical early years.